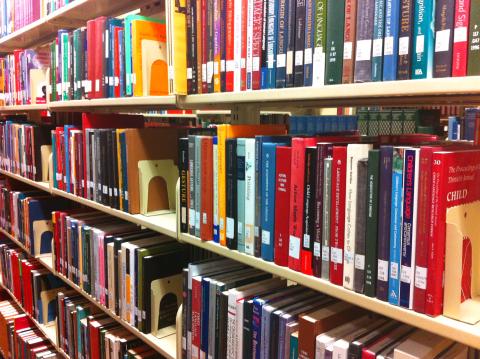 The Queens Library System boasts of having one of the largest systems in the nation. But just because a unit of government is big doesn't mean it is efficient, as I have seen in years of borrowing books from this badly run system.

Our large, unaccountable library system proved to me, once again, that the public sector fails at just about everything it tries, whether it is something seemingly easy like loaning books and tapes or the obviously impossible, like managing a complex society and global economy.

My wife needed a special video tape on electricity for one of her courses at the College of Aeronautics.

She looked it up on the Queens Library online catalogue. According to the catalogue the tape was available at the central branch. We were delighted. The tape would help with her studies.

Still, my wife, who has lived here for more than two decades and for some reason has grown very skeptical of the bureaucrats and other hired help that rule us, nevertheless insisted on telephoning the video division of the library.

"We have it. We have it," the lady at the video division replied to repeated queries.

Did the library have the video? Was it in her hand? "We don't want to make a trip for nothing," my wife said.

"We have it. We have it" was the repeated response. One might as well have asked for anything—"Have you got any crack? I just ran out"—and she sounded as though she would have answered: "We have it."

So I, who likely would have stayed en casa this Sunday to pig out on corn dogs and watch the modern day version of gladiatorial combat on the tube, set out on foot. The central library is about three miles away from our abode in beautiful downtown Kew Gardens. (I walked because I have the same prejudices as my wife. I want as little contact as possible with the MTA madmen, especially those government bus drivers who go crazy on the power brakes and turn some of their passengers into human missiles).

After standing in several lines in the video room, finally a courteous lady looked for the video. She looked several times without success.

"Yes, the video is here," she said. "It hasn't been taken out since September, but now it's lost."

Would the library, I asked, have the video at another branch?

I tried to sum up as people behind me were becoming impatient with my defective medulla. I continued:

"You have it here, but you don't have it here." I was trying to get into the wonderful spirit of the Queens Borough Library System.

"That's right," she smiled at the benighted boob who finally got it.

I swear on the honor of Bobby Orr that this is how the conversation went. And for those snickering cynics let me say, no I didn't have a Colt 45 breakfast on this Sunday. Maybe I can state this in plain English sans the Newspeak of one of our leading government bureaucracies.

Based on what I have been told by many of the disgruntled employees of our magnificent libraries, the system will list books and videos that people will look up and think are there. Sometimes they're not there. You may think they're there. But they're not really there. Got it? The online system is faulty and confuses people. Any better?

Well, given these problems—and maybe they're problems and maybe they're not. Hey, I'm catching on!—I predict this: When the ayatollahs of the library system read this they will have the same reaction as every other government bureaucracy in the city, state, and federal government, in every other nation of the world and on every other planet including Uranus. They will say, "It ain't our fault. Geez, why don't the thoughtless taxpayers give us more money and power?"

I already feel bad. I, a thoughtless philistine who doesn't appreciate the social engineers who are trying to save me, decided to visit the library system online. I considered it my sacred duty to help my masters in their noble work.

I looked for the icon that said "contact us" or the one that said, "write a letter to the Queens Borough Library Board."

I was looking for quite a while.

I figured it would be right next to the icon that said "give us your opinion." I also figured I would come across these icons on the same day that aliens would appear in Forest Park and give me secret instructions on how my beloved Boston Bruins could win the Stanley Cup this year. I never found them; the icons that is. I'm also still waiting for the aliens and the second coming of Bobby Orr.

It's been a long wait.

I called the Queens Library. I asked for the e-mail address of the Library Board.

"Oh, they don't have one. You'll have to send the letter through the mail," said the clerk. That reminds me, someone mailed me a check from Manhattan in early December.

I still haven't gotten it.