The New Push for a Global Currency 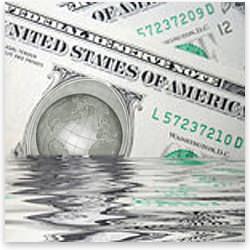 You surely didn't think that the governing elites would let this economic crisis pass without pushing some cockamamie scheme for control. Well, here is the cloud no bigger than a man's hand, a revival of a 60-year-old idea of a global paper currency to fix what ails us.

The IMF study that calls for this is by Reza Moghadam of the Strategy, Policy, and Review Department, "in collaboration with the Finance, Legal, Monetary and Capital Markets, Research and Statistics Departments, and consultation with the Area Departments." In other words, this paper shouldn't be ignored.

It's a long-term plan, but the plan has the unmistakable stamp of Keynes:

A global currency, bancor, issued by a global central bank would be designed as a stable store of value that is not tied exclusively to the conditions of any particular economy…. The global central bank could serve as a lender of last resort, providing needed systemic liquidity in the event of adverse shocks and more automatically than at present.

The term bancor comes from Keynes directly. He proposed this idea following World War II, but it was rejected mostly for nationalistic reasons. Instead we got a monetary system based on the dollar, which was in turn tied to gold. In other words, we got a phony gold standard that was destined to collapse as gold-reserve imbalances became unsustainable, as they did by the late 1960s. What replaced it is our global paper-money system of floating exchange rates.

But the elites never give in, never give up. The proposal for a global currency and global central bank is again making the rounds. What problem is being addressed? What is so desperately wrong with the world that the IMF is floating the idea of a world currency? In a word, the problem is hoarding. The IMF is really annoyed that "in recent years, international reserve accumulation has accelerated rapidly, reaching 13 percent of global GDP in 2009 — a threefold increase over ten years."

You see, monetary policy isn't supposed to work this way. In their ideal world, the central bank releases reserves, and these reserves are lent out, leading to a boom in consumption and investment and thereby global happiness forever (never mind the hyperinflation that goes along with it). But there is a problem. The current system is nationally based and so the economic conditions of one country turn out to have an influence on the borrowing and lending markets. Without borrowers and lenders, the money gets stuck in the system.

This is a short history of the last two years. By now, if the Fed had its way, we would be awash in money. Instead, the reserves are stuck in the banking system. It's like the whole of the population of the United States has suddenly been consumed by the moral advice: neither a borrower nor a lender be.

"In the central bankers' ideal world, the central bank releases reserves, and these reserves are lent out, leading to a boom in consumption and investment and thereby global happiness forever."

And why? Well, there are two reasons. Borrowers are just a bit nervous right now about the long term. They are watching balance sheets day by day, consumed with a weird sense of reality that had gone out the window during the boom times. Meanwhile, the bankers are just a bit risk averse, happier to keep the reserves in the vault than toss them to the winds of fate. They have the bank examiners breathing down their necks right now, and lending doesn't pay well, not with interest rates being suppressed down to the zero level.

Under these conditions, yes, hoarding seems like a pretty good idea. What's more, we should be very grateful indeed for this retrenchment. The idea of plunging back into another bubble seems rather shortsighted.

The IMF has a problem with this practice, though it doesn't dwell on it. The problem is that maintaining high reserves is putting a damper on consumption and investment, prolonging the recession. The simple-minded solution coming from the high-minded eggheads at the IMF is to find some system, any system, that would push the money from the vaults into the hands of the spending public.

The rationale for the global currency and global central bank is that the reserves could always find a market in a globalized system, and would not therefore be so tied to the exigencies of a nationally based banking and monetary system.

An academic paper can wax eloquent for hundreds of pages about the advantages of a global system. It will lead to more stability, efficiency, and less politicization of money and credit. And truly, there is a point here: a real gold standard is always tending toward a global currency system. Different national currencies are merely different names for the same thing.

But there is a key difference. Under a gold standard, the physical metal is the limit, and the market is the master. Under a global paper system, the paper provides no limit whatsoever, and the politicians are the masters. So there is no sense of talking about the glories of globalization in the current context. A world paper currency and world central bank would heighten the moral hazard and lead to a global inflationary regime such as we've never seen. There would be no escape from political control at that point.

Every proposal of a drastic solution such as this always comes with a warning of some equally drastic consequence of failing to adopt the proposal. In this case, the IMF actually raises questions about the survivability of the dollar itself. "There has been a long-running debate speculating on whether the dollar could collapse," says the paper. It raises the worry that if a run on the dollar materializes, central banks could attempt to race each other to dump it permanently.

But, the paper points out, many people wonder whether "good alternatives to the dollar exist." And for this reason, it might be a good idea to cobble together such an alternative sooner rather than later.

There is probably more truth in that statement than most people want to grant. But the right alternative is not yet another and more global experiment in paper-money inflation. God forbid.

If we want an alternative to the dollar, there is one that could appear before our eyes if only we would let it happen. Private currencies traders the world over could, on their own, give rise to a new currency rooted in gold and traded by means of digital media. On many occasions over the last 20 years, such a system nearly came to be. But guess what? The government cracked down and stopped it. The governing elites have decided that there will be no currency reform unless it comes from the marble palaces of the monetary elites.