GET NEWS AND ARTICLES IN YOUR INBOXPrint
A
A
Home | Mises Library | For A New Liberty: Spring 2006 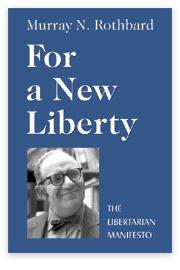 Please help the Mises Institute make Rothbard's For a New Liberty available again! Donate $1,000 here to place your name in the front of this hardbound book as a sponsor of this volume which will once again enjoy a huge circulation in the world of ideas. Other donations are also much welcome: $500, $250, $100, $50.

Murray N. Rothbard was drawn to impossible tasks, and accepted those that came his way. So in 1971, when a major publisher asked him to sum up all of libertarianism between two covers for the intelligent man and woman, he quickly agreed. The result was a complete libertarian manifesto: ethics, economics, history, politics, law, and society--all in one book!

For a New Liberty became the most influential libertarian classic in the postwar period. In subject after subject, it is informative, bracing, challenging. It also features that characteristically clear writing style for which Rothbard is famous. His eloquence stemmed from his organized thinking and passionate drive to tell, teach, and change the world.

This is not a book of political bromides about the need to be free. Here is Rothbard's entire system of thought: natural law, natural rights, Austrian economics, American history, the theory of the state, and more. It is a relentless, scientific, analytical, and morally energetic book that makes an overwhelming case. Indeed, it gave an entire movement its intellectual consciousness.

For a New Liberty is not as famous as Marx's Communist Manifesto. But someday it could be. That's why the Mises Institute is bringing it back into print in a beautiful new edition. You can help by becoming a sponsor. For a donation of $1,000 or more, your name will be listed in the book as one of the generous patrons who made this thrilling new edition possible. Of course, any amount would be great.

There are many varieties of libertarianism alive in the world today, but Rothbardianism remains the center of intellectual gravity, the primary muse and conscience, the strategic and moral core, and the focal point of debate, even when the name is not acknowledged.

Why? Because Rothbard was the creator of a political-ideological system that proposes a once-and-for-all escape from the traps of left and right. No more of their central plans for using state power against the people. Libertarianism is the radical alternative that shows state power as unworkable and immoral.

"Mr. Libertarian," Murray was called, and he remains so. Yes, he had many predecessors from whom he drew: Aristotle, the Scholastics, the European classical liberals, the Austrian economists, the American revolutionaries, and more.

But he put all these pieces together into a unified system that sometimes seems implausible at first, but inevitable once it has been defined and defended by Rothbard. By themselves, the pieces of the system are straightforward (self-ownership, strict property rights, free markets, sound money, peace, anti-statism) but the implications are earthshaking.

Once you are exposed to the complete picture and For A New Liberty has been the leading means of exposure for 30 years. One read and your perspective on world events changes forever. It becomes the indispensable lens through which to interpret events with the greatest possible clarity.

This book more than any other explains why Rothbard seems to grow in stature every year (his influence has vastly risen since his death in 1995), and why Rothbardianism has so many enemies on the left, right, and center.

Quite simply, the science of liberty that he brought into clear relief is as thrilling in its hope for a free world as it is unforgiving of error. Its logical and moral consistency, together with its empirical-explanatory muscle, represents a threat to any intellectual vision that seeks to use coercion and violence to refashion the world. And to the same extent it impresses the reader with a hopeful vision of what might be.

Rothbard set out to write this book right after he got a call from Tom Mandel, the editor at Macmillan who had seen an op-ed by Rothbard in the New York Times. It was the only commission Rothbard ever received from a commercial publishing house. Looking at the original manuscript, which is virtually complete after its first draft, it does seem that it was a nearly effortless joy for him to write. It is seamless, unrelenting, and full of life.

It is also striking that Rothbard chose to pull no punches. Other intellectuals on the receiving end of such an invitation might have tended to water down the argument to make it more popular. Why, for example, make a case for scrapping the state when a case for a little cutting might be more palatable? Why advocate the privatization of courts and roads and water when doing so might risk alienating conservatives? And why show the evil of central banking, when a diluted case for free-enterprise would have pleased moderates?

But trimming and compromising was just not his way. He knew that he had a once-in-a-generation chance to present libertarianism in all its glory, and he was not about to pass it up. And thus do we read here: not just a case for cutting coercive government but eliminating it altogether, not just an argument for assigning property rights but for deferring to the market even on questions of contract enforcement, and not just a case for cutting welfare but for banishing all coercive redistribution.

Whereas other attempts to make a libertarian case, both before and after this book, might call for transitional or half measures, or be willing to concede as much as possible to statists, that is not what we get from Murray. Not for him such schemes as the privatization of government programs that should not exist at all. Instead, he presents and follows through with the full-blown and fully bracing vision of what liberty can be. This is why so many other similar attempts to write the Libertarian Manifesto have not stood the test of time, whereas this book remains in high demand.

Similarly, many books on libertarianism have appeared in the intervening years on philosophy alone, politics alone, economics alone, or history alone. Those that have put all these subjects together have usually been collections by various authors. Rothbard alone had the mastery in all fields that permitted him to write an integrated manifesto --one that has never been displaced. And yet his approach is typically self-effacing: he constantly points to other writers and intellectuals of the past and his own times.

In addition, Rothbard never talks down to his readers, who discover that every page exudes energy and passion, that the logic of his argument is impossibly compelling, and that the intellectual fire that inspired this work burns as brightly now as it did all those years ago.

The book is still regarded as "dangerous" precisely because, once the exposure to Rothbardianism takes place, no other book on politics, economics, history, or sociology can be read the same way again.

What was once a commercial phenomenon has truly become a classic statement of the political foundations of civilization itself. With this handsome, well-priced new edition, if you help make it possible, it will be read for generations to come. Eventually, it could help change the world.

It was Rothbard's dream to change the world. You can help fulfill that dream.

For a gift of $1,000 and up, your name will appear in the front of the book, identifying you as a supporter of this powerful work of libertarian literature, one that will influence the rising generation of students and young professionals. Your name will remain there so long as the book is in print, and we expect that to be many years.

A gift of any amount would be great, because it helps offset the costs of publication and keep the price of the book low, and also assists in promotion and distribution of this remarkable book.

Your involvement will make the difference.