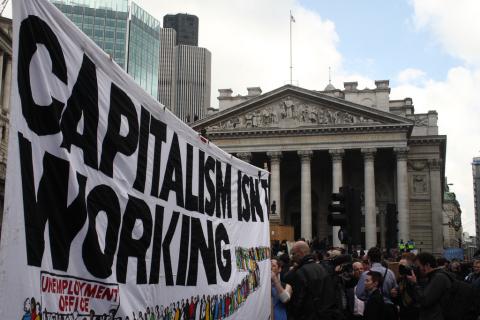 Capitalism (the free economy) is constantly being criticized, and it usually begins with opposition to the merchant class. However, the arguments and examples that people use against business under capitalism are not only illogical but also inaccurate.

People say that big business gets special favors from the government. This is proof that capitalism is only for the rich and powerful. Corporate scandals such as Enron and WorldCom supposedly demonstrate the evil of seeking profit and the destruction that greed causes. However, it is clear that these examples prove how the free-market actually works. In a free-market, businesses are punished for lying and corruption. Just look at what happened to these companies.

When John Stossel, in his television special Stossel Goes to Washington, reported on how government agencies like the Department of Interior and Department of Defense lost billions of taxpayer dollars, what happened to them? Absolutely nothing. In fact, they indirectly have taken even more of our money with help from the Congress (the government doesn't ask us for our money, they are the only entity that can take it by force).

Of course, people by nature are "greedy." We want not only more money and more possessions, but also more time to spend with our family, more time to read and learn, and more time to relax. Would you go to work everyday if you didn't get paid? Have you ever turned down a pay raise or Christmas bonus? I think I know the answer. So, why aren't we portrayed as evil or greedy for trying to get as much as we can, but businesses are evil if they want to get as much as they can?

I admit that businesses are not necessarily compassionate entities that care about us. So what! I wouldn't feel better about myself if I drank my Café Mocha knowing that Starbucks "cared" about me. I don't need a spiritual boost from Starbuck's. All I want is a good cup of coffee. So, businesses want to make money. Well, no kidding! However, the only way they can succeed is if they create something we want and something that we will willingly pay for.

Voluntary trade is a positive sum game. This is not something that needs to be scientifically proven. It is an a priori truth. For example, when I decide to go to Starbuck's, I don't think to myself, "Hmm, what can I do to ruin my day? I know, go to Starbuck's." No! I voluntarily drive to Starbuck's, get out of my car, order, take the money out, and say "thank you" when I get my coffee.

Yes, Starbuck's wins by receiving (notice I didn't write taking) my money, but I also win because I valued that brown liquid more than the green pieces of paper or anything else I could have purchased with that paper.

In John Stossel's video Greed, CEO T.J. Rodgers of Cypress Semiconductors said, "The world is better off when I make a dollar, not worse off…" He is right. Obviously the only way he can make himself richer (absent government subsidies) is by creating value for others who will voluntarily part with their money. Unfortunately, critics of markets do not understand this basic idea. I also have a question for them: if Starbuck's exploited me by taking my money, did I not exploit them for taking their coffee?

The sentiment that seems to permeate our world is that businesses and corporations are bad, and the individual "little guy" is good. Let's take a look at a few examples. Rent control supposedly protects people from paying prices that are too high; in other words,  the evil landlord should be limited in how much money he can take from people. You can see the anti-capitalist mentality at work here. In essence, what supporters of rent control are really saying is that it is perfectly just for the tenant to pay as little as possible but it is immoral for the landlord to charge as much as possible.

Minimum wage is another favorite policy of many "fair-minded" people. Supporters of minimum wage believe it protects a person from the tyrannical restaurant or retail store that wants to exploit their workers. Again, it seems that it is just for someone to get paid as much as possible (take as much from the business as possible) but it is wrong for the business to pay as little as possible.

Probably one of the most emotional arguments for "fair" prices comes up when discussing pharmaceutical drugs. Drug companies are portrayed as benefiting from the misery and misfortune of people. Therefore, the government should protect sick people from these robber baron drug companies. Again, what is clear is that those who advocate price ceilings basically believe it is our right to get the drugs.

I can think of many other examples of supposed unfair prices. How about sports games tickets? Movie tickets? Don't forget the price of roses during Valentine's Day. The bottom line is that those who complain about high prices or want government intervention to protect us do not understand reality.

The common man is the sovereign consumer whose buying or abstention from buying ultimately determines what should be produced and in what quantity and quality.1

Many excellent free-market economists have written about the unintended consequences of price controls and government regulation. However, what is absent in many textbooks and economics articles is the moral dimension. The main criticism I have with all the arguments about prices being too high or that businesses "rip people off" after natural disasters or exploit sick people is that people talk as if it is their right to get an apartment, get paid a certain wage, get the drugs, or go to a professional sports game. That is extremely arrogant and immoral in itself because it implies that people have rights over the property of other people (the business, apartment complex, movie theater, etc.).

I have gone to dinner with friends where they have complained about the dinner being overpriced. They got a bit uneasy when I responded by saying, "No, it's just priced. Nobody forced you to come here and eat the dinner. Obviously, you feel that it is worth it to eat here or you would not have come in. So, shut up and eat or leave."

It is amazing how much hypocrisy there is when it comes to "getting too much." In standard economics textbooks, the concept of consumer surplus is explained. In short, consumer surplus is the difference between the maximum price one would pay to purchase a good or service and what they actually paid. So, if I were willing to pay $5 to get the cup of coffee at Starbuck's but they only charged me $3.25, my consumer surplus would be $1.75. If I go to Kenneth Cole and purchase a shirt for $50 but I would have paid the original price of $75, oh and yes, I receive another $10 off because of some promotion, I just extracted an additional $10 of consumer surplus to the already $25 I received.

I don't know about you, but I have never said to the Starbuck's employee or to the retail store cashier, "You know, thank you for the sale but here is some more money because I would have paid more and I don't want to rip you guys off." Have you ever said that? Well, then aren't you "greedy" and aren't you ripping businesses off?

Just as it is not immoral to pay as little as possible, it is also not immoral when businesses want to charge as much as possible. Again, a transaction will not take place unless both parties think will they benefit. Of course, I would like to pay nothing to get my gasoline and the gasoline company would love to charge me not $1.87 per gallon but $1,000,087.00 a gallon. Obviously, we both have to compromise. Price is determined by supply and demand.

Another question we have to answer is what is too high or too low? How does government know what the correct price should be? Or how do we determine what is a fair price? If the answer is a "modest" profit above the cost to supply the good or service, again, what does "modest mean" and, even if we could determine that, why should that be the highest price? Why is it wrong for the company to charge as much as possible?

In the John Stossel special on 20/20 "Give Me a Break" dealing with drug prices, Barbara Walters said she was "offended" because she had to pay $90 to get prescription eye drugs. My first point is that she didn't have to do anything. The drug company could not force her to pay the $90 and she obviously paid the $90 because it was worth it to her. And second, why was she offended? It was not the drug company's obligation to create eye drops for her in the first place.

Sometimes businesses do gain at our expense: for example, when a sports team convinces the mayor and city council to use taxpayer money to build a stadium. That is ripping off taxpayers who might hate sports or never attend a function at the stadium. But, again, in a true free-market that would not take place. Government would create the rules and act as a referee not as a player in the game.

People who get angry at high prices believe it is their right to a good or service, yet they act differently when they are the seller. The entitlement attitude that many people have is appalling. Maybe one way to get others to think twice about their attitude is the next time they get angry at high food prices, or say that entertainment "costs too much" or get mad at gasoline stations for price "gouging," tell them to grow their own food, raise and slaughter their own cow (or vegetables if you live in California) or drill for their own oil and make their own gasoline (if you don't live in "green" California) or get their Ph.D. in biochemistry, pour millions of their own dollars into research, and make their own drugs.

If they don't respond to you, tell them to stop wasting their breath and your time while they continue to voluntarily get "ripped off" by the evil businesses that provide their meals, the movies they enjoy, and the greater quality of life they have.