The Myth of the War Shock 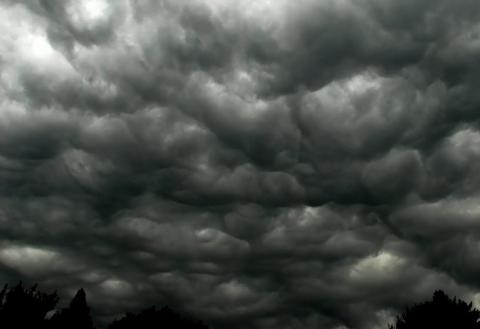 A top panel of economists slashed their forecasts for US economic growth this year, saying the threat of war with Iraq was dampening consumer spending and business activity. The Blue Chip Economic Indicators panel of forecasters said it expected GDP to expand at a rate of 2.6% in 2003. The prediction made in January stood at 2.8%.

The looming war with Iraq raises concern among US economists that this could trigger a recession. It is argued that the possible war generates uncertainty, which in turn paralyses business and consumer expenditure. Some analysts believe that the large loss of 308,000 jobs in February was partly in response to war fears that prompted a widespread reluctance to hire. It follows then that in the absence of a fear of war the US economy would have been by now in a recovery phase.

According to this way of thinking, a major source of disturbances is a sudden change in peoples' psychology. Hence if "out of the blue" consumers and business people become optimistic and embark on a buying spree, this pushes the economy above the stable trajectory and sets in motion an economic boom. Likewise recessions or economic busts are set in motion if people suddenly change their psychology and stop spending.

Since these deviations from the path of stable economic growth are costly it is held that the government and the central bank must be always on guard and introduce policies that will offset these deviations. Various consumer and business sentiment surveys are conducted in order to alert the authorities of a possible shift in people's psychology.

For instance, if suddenly people become too optimistic the authorities must step in and cool off this excessive optimism by means of a tighter monetary stance. Conversely, if people's psychology turns suddenly pessimistic the central bank must offset this by accelerating the money supply rate of growth and by lowering interest rates. Also, the government must raise its expenditure in order to offset people's sudden unwillingness to spend.

Similarly it is the role of government authorities to be vigilant to various other shocks including the shock of war and counter their effects by means of suitable policies, so it is held.

Although theoretically it is held one can devise a set of rules that would enable authorities to keep the economy on a stable trajectory, in reality it is not that simple. As a result of variable lags from changes in policies to their effect on various parts of the economy it is not possible, so it is argued, to establish the correct timing of various policy measures. It is also maintained that a lack of sufficient knowledge regarding the strength of the economy makes it very hard to decide on the required degree of monetary and fiscal measures.

Consequently, in many instances various monetary and fiscal policies rather than stabilising the economy have become a major source of instability. In this regard, some economists blame the overzealous central bank monetary policies aimed at countering inflation for most US recessions.

Thus, according to Rudiger Dornbusch, "None of the US expansion of the past 40 years died in bed of old age; every one was murdered by the Federal Reserve." (Quoted in Peter Temin's The Causes of American Business Cycles: An Essay in Economic Historiography, Federal Reserve Bank of Boston, "Beyond Shocks," June 1998).

In a free-market economy every producer pays for his consumption, or funds his consumption, by means of the goods and services he has produced. Whilst it is true that every producer generates his own funding, it is however, the availability of final goods and services that are ready for human consumption that ultimately determine people's well-being. The stock of these goods is what the pool of real funding is all about.

For instance a producer of bricks couldn't sustain his life and well being if no one was producing food. Neither is it of much help to build sophisticated machinery which will make it possible to produce more sophisticated machinery, which in turn will make only a marginal contribution to the production of final goods that are required for our life and well-being. On the contrary, such activity only ties up scarce real funding, which amounts to consumption that is not supported by useful production. This in turn leads to a depletion of the pool of real funding which undermines the future production of real wealth.

So, while shocks can disrupt the pace of economic activity, this has nothing to do with the phenomenon of recurrent boom-bust cycles. The phenomenon of recurrent boom-bust cycles requires a mechanism that persistently and systematically feeds and supports this phenomenon. The only mechanism that does this is the monetary policies of the central bank and the existence of the fractional reserve banking.

While in a free unhampered market economy there is a tendency towards a harmony between production and consumption, this is not so when we introduce to our discussion the central bank, which disrupts this harmony.

In a free unhampered market economy money facilitates the exchange of production of one producer for the production of another producer. In short, by means of money something is exchanged for something else. However this is not so when the loose monetary policies of the central bank set in motion the creation of money out of "thin air." The newly generated money gives rise to an exchange of nothing for something.

Whenever the central bank tightens its stance, i.e., raises interest rates and curtails monetary pumping, this undermines the existence of various non-productive activities and threatens their existence. This is the essence of an economic bust, or recession. Observe that a tighter monetary stance slows down the diversion of real funding towards non-productive activities, which in turn helps wealth generating activities.

It follows then that an economic bust is nothing more than the liquidation of non-productive activities that have emerged on the back of previous loose monetary policy of the central bank.

Note that the reason for the recurrent emergence of boom-bust cycles is the fact that central bank authorities continuously pursue so-called monetary policies that are aimed at navigating the economy toward a path of stability and prosperity. Furthermore, note that a tighter stance is bad news for non-productive activities and welcome news for wealth generators. This is in contrast to mainstream thinking, which regards a tighter monetary stance as bad news for all activities.

So if recessions are about the liquidation of non-productive activities how do we categorise an event like a war? What is the contribution of a war to a recession? As such war has nothing to do with the phenomenon of a recurrent boom-bust cycle.

According to Murray Rothbard,

"Before the Industrial Revolution in approximately the late eighteenth century, there were no regularly recurring booms and depressions. There would be a sudden economic crisis whenever some king made war or confiscated the property of his subject; but there was no sign of the peculiarly modern phenomena of general and fairly regular swings in business fortunes, of expansions and contractions" (Economic Depressions: Their Cause and Cure, Mises Institute).

In this regard, after falling to -0.3% in Q3 2001 the growth momentum of real GDP has been in an up-trend since that period. Year-on-year in Q4 the rate of growth stood at 2.9%, a marginal decline from the 3.3% in Q3 (see chart). This up-trend however, is most likely coming to an end. The reason for that is a visible decline in the growth momentum of real money AMS (Austrian School Money Supply). The yearly rate of growth of this monetary measure fell from 9.4% in February 2002 to 3% in February 2003 (see chart).

Note that the likely economic bust has nothing to do with the possible war in Iraq but is purely on account of the fall in the growth momentum of money. If anything, the looming war is set to undermine the process that purges various activities that sprang up on the back of the past growing momentum of money supply. By reinforcing various non-productive activities war therefore sets the foundation for a much harsher economic adjustment some time in the future.

In short, the looming war can only make things much worse as far as the pool of real funding is concerned. For instance, William Nordhaus has estimated that the cost of war with Iraq could vary between $121 billion to $1,595 billion, in constant 2002 dollars over the next 10 years (see The Economic Consequences of a War with Iraq, Yale University, October 2002).

This of course means that all these real dollars, instead of being channelled towards real wealth generation, will be squandered. All this will only further delay the likelihood of a sustainable and meaningful economic expansion. In the meantime, the 12 month moving average of Federal outlays on defence jumped to $30.7 billion in January, an increase of 16.3% against January last year (see chart). 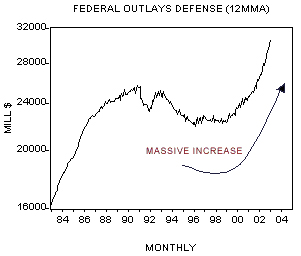 The likely emergence of an economic bust is not on account of the looming war with Iraq as suggested by popular thinking, but rather the outcome of the Fed's monetary policy. Boom-bust cycles are not caused by various shocks including the shock of a war. The mechanism that is responsible for the phenomenon of boom-bust cycles is central bank monetary policies.