GET NEWS AND ARTICLES IN YOUR INBOXPrint
A
A
Home | Mises Library | The Myth of Functional Finance: Mises vs. Lerner

The Myth of Functional Finance: Mises vs. Lerner 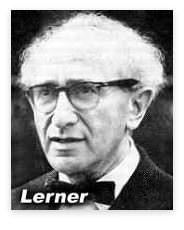 Those familiar with the history of twentieth 20th-century economic thought know of the dominance of "Keynesian economics" following the Second World War. While John Maynard Keynes typically receives credit for transforming economics, much postwar Keynesian economics was actually developed by his interpreters and followers.

Perhaps the single most important one of these followers was the Romanian born economist Abba P Lerner. Keynes's book The General Theory of Employment, Interest, and Money popularized the notion that market economies were prone to persistent unemployment. Keynes often receives credit for promoting government deficit spending as a means of combating unemployment. However, Abba Lerner developed this part of the Keynesian program.

Keynes did suggest the socialization of some investment by elected officials. This would solve the problem of unemployment within the framework of a democratic society. Yet Keynes did not work out the details of how this would work. Lerner (1943) proposed a program of "functional finance" to counteract the business cycle.

According to this proposal government officials would reduce tax revenue and/or increase public spending during times of recession. This policy would push the government budget into deficit. Government borrowing would increase aggregate demand and lower unemployment. Lerner believed that an excess of planned saving over planned investment caused unemployment. Politicians could solve this problem by absorbing excess saving into an increasing budget deficit.

Of course, this would lead to the accumulation of public debt. Lerner had a simple solution to this problem. After the economy recovered and prosperity returned politicians could raise more tax revue and/or limit spending. This would produce a budget surplus and pay down the debt. Thus politicians could balance the public budget through the business cycle.

Keynes published his book seventy years ago, so enough time has passed to consider the record of his work, and that of his followers. Many economists have criticized Keynesian fiscal policy since Lerner worked out his proposal for functional finance. Milton Friedman argued that there were "long and variable lags" in using fiscal policy.

William Nordhaus (1975) argued that the use of fiscal policy would produce a "political business cycle." James Buchanan asserted that Keynesian economics broke fiscal discipline in American politics. These are legitimate responses to Lerner and Keynes. Yet it has hardly been recognized that Ludwig von Mises posed serious objections to Keynesian-type proposals over a decade before Keynes published his book. Mises (1922) considered the results of democratic control of investment.

To Mises any socialization of investment meant "Decisions upon matters of capital policy will be made by the community — immediately by the economic administration, ultimately by all the citizens" (1922, p. 179). Mises saw that under capitalism the decision to save depended upon "the thrifty and the well to do." Public control over investment meant that the rate of saving would be the concern of "everybody — without distinction — therefore also of the idler and the spendthrift" (ibid).

Mises noted that since private interest payments are absent from the public decision making process concerning saving and investment, "the incentive which provides a higher standard of life in return for saving will not be present." The absence of these incentives inhibits capital formation and impedes economic development:

"The door would therefore be open to demagogues. The opposition will always be ready to prove that more could be assigned to immediate satisfactions, and the government will not be disinclined to maintain itself longer in power by lavish spending … In general, new capital is created only when the necessary sums have been raised by loans-that is from the savings of private citizens. It is very seldom that capital is accumulated out of taxes or special public income. On the other hand, numerous examples can be adduced of cases in which the means of production owned by public bodies have depreciated in value, because in order that present costs may be relieved as much as possible, insufficient care has been taken for the maintenance of capital." (Mises, 1922, p179).

It is quite clear that Mises did not trust the democratic process as far as capital accumulation was concerned. On the other hand Lerner obviously felt that politicians could be trusted to act responsibly in these matters. There is a clear difference between Mises and Lerner. Lerner merely assumed that politicians would passively accept the counsel of professional economists when formulating fiscal policy. Mises, on the other hand, considered real political expediencies.

Ironically, politicians did a better job of following Lerner's advice before he gave it, and ignored this advice afterwards. The Harding and Coolidge Administrations paid off a substantial amount of public debt during the boom of 1923-1928. Warren Harding paid off 2 billion dollars in public debt — without impeding recovery from the 1921 depression. Calvin Coolidge paid off about twice as much public debt as Harding. The Coolidge surpluses took place during the economic boom of the 1920s, just as Lerner would later recommend.

Large federal deficits continued under FDR, rising to three and a half billion dollars. Coolidge, Hoover, and FDR tested Lerner's program for functional finance years before he proposed — and it failed to counteract the business cycle. On the other hand, Harding cut federal spending (and taxes) massively and created surpluses during a depression. Lerner won high praise for his proposal, but recent experience had already demonstrated that it did not work particularly well.

In the postwar years politicians assumed greater responsibility for "managing" the economy. The full employment act of 1946 made economic management an official responsibility of the Federal government. Politicians also became aware of Keynesian economics. At one point President Nixon declared, "We are all Keynesians now."

Yet it seems that the more politicians learned about Keynesian economics, the less likely they were to abide by its policy prescriptions. Harry Truman was the last president to pay off any substantial debt. Since 1952 the federal budget has been in surplus only a few years. The federal government ran deficits during almost every year of the sixties, seventies, eighties, and nineties.

Spending restraint by the 1994 Republican Congress seemed at first to have ended the trend towards debt accumulation, but President Bush put an end to this brief period of fiscal housecleaning. Not only has the federal government run deficits during nearly every boom year in this period, some of the largest federal deficits were during boom years. It should be quite clear that politicians are not even trying to follow Lerner's program of functional finance.

Unfortunately, Mises was all too accurate in his predictions. American politicians have sought to maintain themselves in power through lavish spending, relative to tax revenue. This has resulted in massive debt accumulation and grotesque under-funding of federal entitlements. Very little of this spending could be construed as capital investment.

The federal government has invested in a highway system, but most of federal spending aims at increasing current consumption — just as Mises predicted. In fact, the US Congress recently increased the federal debt ceiling from 8.2 trillion dollars to a staggering 9 trillion dollars. According to Lerner's program for functional finance the federal government could take an active approach to managing unemployment without any debt accumulation over time. The fact that the United States has accumulated close to 9 trillion dollars renders his proposal absurd.

The debt of the United States, along with the debt of other nations, absorbs massive sums of financial capital. This hinders real capital formation and leaves living standards lower than they would have been otherwise. This is tragic not only because it is our actual situation, but because it was fully avoidable. We did not need hindsight to see the problems with trusting politicians to "manage the economy" with fiscal policy. Nor do we need to go back only to the writings of Nordhaus, Buchanan, and Friedman to see why Keynesian policy is both unnecessary and dangerous. Mises explained that politicians could not be trusted with fiscal discretion all the way back in 1922.

The actual record of fiscal activism in the United States reveals that it was Mises, not Lerner, who understood the realities of fiscal activism. Not only have Keynesian policies failed where they have been tried, the idea that deficits are "good for the economy" has been used as cover for politically motivated fiscal irresponsibility. Today politicians from both major parties speak of how they can stimulate the economy with tax cuts and spending increases. Keynes and Lerner succeeded only in promoting fiscal excess and retarding capital formation.

While it would have been best for us to have followed the advice of Mises to begin with, it is not too late for us to start now. It might seem that the problem of restoring fiscal responsibility is insurmountable. After all, powerful special interests stand behind current spending programs. Yet special interests are not necessarily the most important factor in restoring fiscal sanity. As Mises wrote (1922, p 459-460) "everything is decided by the interpretation and explanation of the facts, by the ideas and the theories…. Only ideas can overcome ideas and it is only the ideas of Capitalism and of [classical] Liberalism that can overcome socialism." So too can the ideas of capitalism and classical liberalism overcome the idea of Keynesian functional finance.

Milton Friedman, "The Lag Effect of Monetary Policy," The Optimum Quantity of Money and Other Essays.