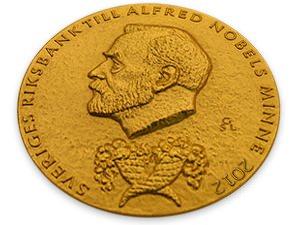 Howard Gold should be appointed a one-man Nobel-prize committee.

I'm not calling for him to win the prize, just for him to have the job of bestowing the title.

I base this on very little substance: I know nothing of the man. I have never met him. I've never seen his picture. However, I have read exactly one article that Mr. Gold has written, and on the strength of that article, I officially offer my support.

Elevating Gold to this position of power would allow me to join the ranks of Nobel laureates. You see, Gold is searching for the next Nobel-prize winner in economics,1 postulating that this winner will be the individual who figures out an explanation and a cure for the recession that began in 2008.

Somewhere some brilliant economist might be figuring out a new way to solve these knotty problems. If he or she succeeds, there'll be a Nobel Prize with his or her name on it. Only then will we be able to move beyond great 20th Century thinkers like Friedman and Keynes, whose moment has now passed.

In essence, the "knotty problems" he describes are just the failure of the theories of Keynes and Friedman to adequately explain the recession of 2008 and plot a proper course out of the downturn.

Bernanke, it is argued, "followed Friedman's monetarist playbook to a 'T': He flooded the system with liquidity and stuffed banks full of reserves in a series of desperate efforts to stanch the new Great Contraction." Gold cites a Reason article from 2009 to support this claim, saying that "Bernanke is following a monetarist depression-prevention model laid out by Nobel laureate and libertarian patron saint Milton Friedman."

I will concede that I may know a different set of libertarians than the unnamed Reason author; but Friedman is more accurately vilified as an apostle of illogical syncretism between contradictory schools than revered as a patron saint of libertarian economics — more Manichaeus than Paul of Tarsus.

Gold draws a distinction between Bernanke's alleged monetarism and the textbook-Keynesian course of Bush and his ideological brother, Obama. Gold points out that

I give him much credit for noting the blatant Keynesian policies pursued by both presidents. Furthermore, Gold is to be lauded for recognizing the abject failure of these policies. Of course, Krugman's "the stimulus was too small" rebuttal is mentioned, as apparently it must always be. The delusion of all who would sacrifice their children upon the altar of an omnipotent state's ability to turn paper into gold is powerful and pervasive. In the end, it seems, Gold rejects Krugman's argument.

Striking in all this, however, is the source of Gold's somewhat muddled reasoning. This article cultivates the image of Ben Bernanke as the iconic disciple of monetarism — Friedman's chief proponent and star student. Whether this is accurate is immaterial; it is simply used as a rhetorical tool to advance a bizarre premise that underlies Gold's piece — namely, the notion that Keynes and Friedman represent polar opposites on an ideological spectrum.

Gold's thesis is that these two economists represent laissez faire on the one hand and government interventionism on the other, and that there is a great chasm between the two. In reality, Friedman and Keynes are separated only by the degree of interventionism that they advocate.

Friedman's failure to see that monetarism would ultimately lead to the excesses of Keynesian tinkering in the economy is tragic, but the failure of so many today to recognize this is without excuse.

Gold's first false premise leads to another: the notion that government action is always the answer. This, of course, forces him to throw up his hands in despair and lament the sad state of affairs we have reached when government, even government, fails. He states that, tragically, "we're in for a long period in which government action can't fix our problems."

But he is blinded to the fact that government intervention never could save us. It could only compound our troubles and create new ones. I see this blindness as my opportunity to win that Nobel Prize; and I could really use the 10 million krona (to convert into sound money, of course).

So here's my plan: I shall attach my name to the great works of the Austrian School that explain the business cycle and the deleterious effects of money creation and government interventionism. Human Action or Prices and Production. We don't believe in intellectual property, right?

Perhaps it would be more ethical to just point out to Mr. Gold that the Nobel prize of which he speaks has already been awarded. Friedrich August von Hayek won the prize in 1974 for

pioneering work in the theory of money and economic fluctuations and for … penetrating analysis of the interdependence of economic, social and institutional phenomena.

Some brilliant economist has already figured out the solution to these "knotty problems;" indeed, a rich tradition of thought has developed to answer the questions with which modern economists struggle. The answer lies in sound currency, free markets, and free people.

As long as government intervention remains the essential doctrine of economic theory, Gold and others like him will fail to see that the solution to our problems is not to embrace the next generation of market manipulators; the solution is to open our eyes to the truth that has been masked by the irrational belief in omnipotent government.

For over a century, scholars of the Austrian School have been "proceeding ever more boldly" against the evils of central planning, totalitarianism, and the policies that transform minor recessions into prolonged depressions. It is time to heed their message