GET NEWS AND ARTICLES IN YOUR INBOXPrint
A
A
Home | Mises Library | Must We Do Something, Anything, about Global Warming?

Must We Do Something, Anything, about Global Warming? 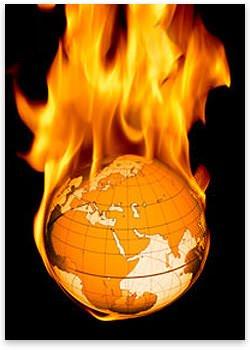 A friend of mine sent me a link to a video labeled "The Most Terrifying Video You'll Ever See." According to YouTube, this video has been viewed over 3.5 million times. Narrator Greg Craven, a high-school science teacher, presents an application of the precautionary principle to the debate over anthropogenic global warming (AGW). Craven claims to have found an argument that does not depend on the resolution of the scientific controversy — a "silver bullet argument," an argument that leads to an "inescapable conclusion," one "that even the most hardened skeptic and the most panicked activist can agree on."

I beg to differ.

Craven starts out with the premise that we can reduce the problem to one of four possible outcomes, which he places on a grid (as shown below). The rows represent the proposition that the worst outcome of AGW (the end of human life on earth) is on its way or is not. The columns represent the choice to do something or do nothing.

Craven then proceeds to examine the implications of ending up in each one of his four quadrants. I have written an abbreviation of his conclusion in the cells of the table:

According to Craven, because we cannot be totally certain about the science, we need to find another way to choose our course of action. And Craven aims to show that this is possible. He states that "we begin by acknowledging that no one can know with absolute certainty what the future will bring." This argument is a variant of Pascal's Wager, which structures the issue of belief in God the same way, with punishment for nonbelievers as the worst case.

Craven's reasoning is that the objective of our decision-making process should be to avoid the top right cell. He observes that we cannot control which row we are in because we don't know for sure the outcome of the science; but we can avoid the top right cell (total disaster) because we can control which column we are in. We should choose to "do something" to ensure that we end up in the right column rather than the left column.

There are many problems with this approach.

The first problem is that this argument proves too much. The premise — that something really, really bad might happen — is undoubtedly true: there is a virtually unlimited supply of hypotheses about things that might go wrong. The less evidence required for any particular catastrophe, the longer the list of bad things we can make. Craven's mode of argument could be used to prove that we should "do something" about any — or all — of them.

Go through the entire video and replace "global warming" with "Saddam Hussein has weapons of mass destruction":

Saddam Hussein might have WMDs, which he could be planning to use against the United States. No one can prove that he does not because, as members of the neocon war party enjoyed pointing out, you can't prove a negative.

Even trying to use reason to figure out whether or not Saddam has WMDs is what Mr. Craven would call "row thinking," while what we need in dark times such as these is "column thinking."

It is true that we will incur costs by invading Iraq: dollars, some American deaths. Maybe we disrupt the lives of Iraqis a bit. But the cost of the worst case is incalculable.

The conclusion is therefore inescapable to all rational and right-minded people: we must invade Iraq.

Glenn Greenwald, in a recent piece, points out that this exact argument is being used to defend the decision to go to war in Iraq.  And now the war party is using the same argument to lie the country into a war with Iran ("we cannot allow a nuclear Iran") even though there is no credible evidence that Iran has a nuclear weapons program — it takes Scott Horton less than seven minutes to debunk the propaganda on this issue.

The second problem I will address is that Craven's argument proves nothing at all. His objective is to show that we should do something to avoid the worst case. But to prove that we must "do something" is to prove nothing. He organizes the problem around a set of abstract choices. But in life, we face only concrete choices, not abstract ones. While deciding to "do something" about an issue in your life that you have been ignoring might be an important psychological step, it is still not an actionable decision. What to do is the real decision and cannot be separated from the decision to "do something."

Another way of saying this is that the grid describing reality has more than two columns. It has infinitely many columns representing the infinite range of choices that exist in the real world. Craven's mode of argument provides no guidance as to how many resources should be expended or in what direction to address the problem.

The aim of Craven's argument is to show that we can avoid the worse case without resolving the science. But this is only true if we choose a concrete plan that has the desired result. We have an infinite range of choices that all involve doing something — and some other choices that involve watching and waiting. Because our resources are finite, we could not adopt all policy proposals. To avoid the worse case, we would have to evaluate whether each proposal might have any benefits at all and whether the benefits outweigh the costs. Should we choose one staggeringly expensive plan that might work? Or ten less expensive plans that each have a chance of working?

If we use up a vast amount of resources on one very small risk, then we will be in a worse position to deal with other problems that do materialize. Maybe the best course is to do nothing right now, relying on economic growth to increase our wealth and therefore our range of choices in the future?

The argument can be used to prove whatever conclusion you want, depending on what you posit as the worst case.  For example, try using the argument on the following worst case: we implement restrictive carbon-emission legislation and that causes even worse climate change.  Or this: destroy the world's economy fighting a problem that doesn't exist (AGW), and then a very real — and much bigger — crisis emerges (and, as Mr. Craven points out, science cannot prove whether this will or will not happen), but we have no more wealth left to address it. Craven's contention proves that we should do nothing now so that we can address the real worst case that has not yet shown its face.

This brings us to another gross deficiency in Craven's argument: the choice among the many concrete options that we have depends on our understanding the cause and effect of each choice. To "do something" is for us to create some causes that we believe have certain effects. We cannot evaluate the effect of any cause without relying on the science of the issue. The science applied to any concrete proposal is essentially the same controversial science that Craven claims we don't need in order to reach a conclusion about what to do.

As the Social Issues Research Centre (SIRC) explains in their excellent commentary on the precautionary principle,

[t]he precautionary principle is, however, a very useful one for consumer activists precisely because it prevents scientific debate. The burden of evidence and proof is taken away from those who make unjustified and often whimsical claims and placed on the scientific community which, because it proceeds logically and rationally, is often powerless to respond. This is what makes the principle so dangerous. It generates a quasi-religious bigotry which history should have has [sic] taught us to fear. Its inherent irrationality renders it unsustainable.

The deficiency is illustrated this way. If the goal is to avoid the worst possible outcome, then "do something" is not enough. We must do something effective. Some of the actions we might take would not be very costly but would also (probably) not meet Mr. Craven's criteria for effectiveness.

Suppose that we all wore Whip Global Warming Now buttons? Would that help us avoid the worst case? Some might say so, but the strongest objection to that plan would be that there is no scientific basis for the belief that wearing buttons has any impact on global climate change.

Suppose that I agreed with Craven's conclusion and suggested as the solution that we lengthen our commutes to work so we can drive more, and that we increase the use of coal-fired power plants. Oh, but that won't work, he might say, because it would increase carbon emissions. But this is only a constructive response if carbon emissions are really the cause of AGW. Without any science linking cause and effect, how do we know that reducing (not increasing) carbon emissions will help?

Though Craven doesn't present a concrete proposal, clearly he has something in mind — probably Cap and Tax or a similar scheme — because he is able to fill in the lower left quadrant of his grid with various economic costs — depression, lost jobs, lower wages, and the like. Similar legislative proposals would incur the absolutely stupefying cost of reducing carbon emissions to preindustrial levels.

Craven claims that the risk of inaction outweighs the risk of action. But as I have shown, an analysis entirely in terms of the abstract categories he uses does not reach any meaningful conclusion. Relative costs can only be understood in terms of the concrete choices and their actual or estimated costs. While it is true that it might be worth taking action to avoid a very small risk with a very high cost, rationality requires an estimation of the risk and the cost.

Think about how you face the risk of extinction in your own life. Your life could end suddenly for many reasons — a car accident, an airplane crash, a predator-drone strike (just kidding), or even a 16-ton weight falling on your head. What is a rational approach to managing these risks? Some of them are, for most of us, too remote to think about, while others justify modest costs to reduce them. You could avoid all risk of car accidents by staying at home all the time, but for most people that cost is too high.

Mr. Craven compares the problem to that of buying a lottery ticket, but a rational approach to even lottery-ticket purchases requires a calculation in terms of the cost of each ticket against the probability of winning and the expected winnings.

The point of Craven's argument is to reach a conclusion that we should support carbon-trading permits or some other incredible central-planning scheme that would fundamentally alter human society and economics without having to win on the science.

AGW promoters have good reason for steering people away from the science. Once you start to tug on that ball of yarn, the entire politically motivated fraud starts to unravel.