GET NEWS AND ARTICLES IN YOUR INBOXPrint
A
A
Home | Mises Library | Mr. Feynman's Politics 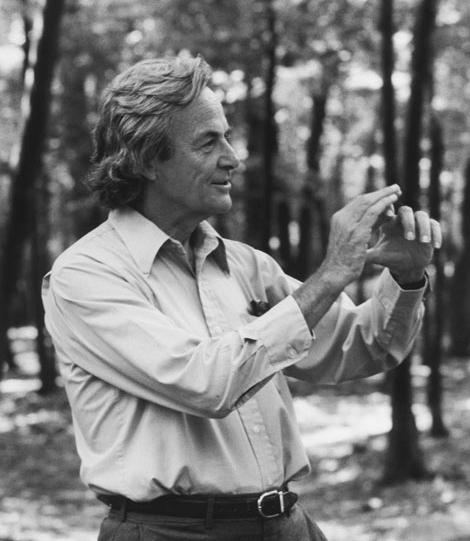 Second to deciding which CD or book to take to a desert island, perhaps the most popular mental exercise is to select the single person from all of human history whom one would most like to meet. The choice is a difficult one; various considerations begin to accumulate with each moment of reflection. Obvious candidates, such as Aristotle and Jesus Christ, suffer from the unintelligibility of their speech (barring miraculous intervention in the case of the latter).

A meeting with prolific authors—say, Thomas Paine or even Ludwig von Mises—would likewise be anticlimactic, for their thought has been so clearly captured in their works. Although he reserves the right to change his opinion, the present reviewer would tentatively select Richard P. Feynman, Nobel laureate in physics.

Although Feynman has offered several books for the lay public related to his beloved subject of physics, the volumes covered in this review are more biographical in nature, as they deal with the personal anecdotes of this eccentric genius. It is true that many of these "Adventures of a Curious Character" (the first book’s subtitle) relate to Feynman’s experiences in the world of physics. However, no technical background is required to enjoy these wonderful collections.

The present review is not meant for the general public; indeed, such a review would be a bit superfluous, inasmuch as the first volume in question is fifteen years old, and has long since been a national bestseller. Rather, the purpose of this review is to serve as an introduction to the reader with a libertarian bent, who thus far may have no familiarity with Feynman.

It is evident that Feynman, though one of the most well-rounded thinkers of this century, was completely ignorant of classical liberal theory. It is all the more refreshing, then, when he reaches anti-statist conclusions by reinventing the wheel, as it were. (Incidentally, this habit is nothing new for Feynman. As a hobby, he undertook the forbidding task of deciphering Mayan hieroglyphics, and got surprisingly far.) This eminent sensibility—despite obvious ignorance—is nowhere better demonstrated than in the following excerpt from a letter to his wife:

So Warsaw is not very heavy and dull, as one hears Moscow is. On the other hand, you meet at every turn that kind of dull stupid backwardness characteristic of government—you know, like the fact that change for $20 isn’t available when you want to get your card renewed at the US Immigration Office downtown...

The real question of government versus private enterprise is argued on too philosophical and abstract a basis. Theoretically, planning may be good. But nobody has ever figured out the cause of government stupidity—and until they do (and find the cure), all ideal plans will fall into quicksand. (What Do You Care, 90-91)

On another occasion, Feynman had been finally cajoled into attending a conference on "the ethics of equality." (Feynman was notorious for thumbing his nose at the "duty" which academics were supposed to owe to "society.") After mentioning that the conference’s stenographer approached Feynman, sure that he could not be a professor—since he was the only one attending whose words made any sense to the stenographer!—Feynman describes the apex of the conference:

There was a special dinner at some point, and the head of the theology place, a very nice, very Jewish man gave a speech. It was a good speech, and he was a very good speaker, so while it sounds crazy now, when I’m telling about it, at that time his main idea sounded completely obvious and true. He talked about the big differences in the welfare of various countries, which cause jealousy, which leads to conflict, and now that we have atomic weapons, any war and we’re doomed, so therefore the right way out is to strive for peace by making sure there are no great differences from place to place....Everybody was listening to this, and we were all full of sacrificial feeling, and all thinking we ought to do this. But I came back to my senses on the way home...

[T]he idea of distributing everything evenly is based on a theory that there’s only X amount of stuff in the world, that somehow we took it away from the poorer countries in the first place, and therefore we should give it back to them. But this theory doesn’t take into account the real reason for the differences between countries—that is, the development of new techniques for growing food, the development of machinery to grow food and do other things, and the fact that all this machinery requires the concentration of capital. It isn’t the stuff, but the power to make the stuff, that is important. But I realize now that these people were not in science; they didn’t understand it. They didn’t understand technology; they didn’t understand their time. (Surely You’re Joking, 282-283)

Thus we see again that Feynman—though initially seduced by the self-righteous temptations of nearly all academics outside of economics—is rescued by his intellect and willingness to question the received wisdom.

By far the most interesting of Feynman’s adventures is his time spent, with his fresh Ph.D., at Los Alamos working on the atomic bomb. (Nobody’s perfect.) In these chapters, the reader learns of the havoc wreaked on government officials by Feynman. (And also by his wife: After being told that they must stop corresponding in code, she wrote a love letter on a jigsaw puzzle, much to the chagrin of the overworked mail censors.)

Ever the instigator of harmless mischief, Feynman set out to crack the safes housing the entire collection of atomic secrets—and succeeded. (True to form, Feynman relates not merely that he cracked the safes, but explains precisely how he did it—and how the military’s response to his exploits was not to correct the security flaws, but rather to send out a memorandum warning everyone to be wary of Feynman.) His encounter with a big-shot colonel is particularly amusing:

[The colonel put Feynman’s] report in the safe, grabbed the big handles, and swung the great brass doors together. It sounds so good when they close, but I know it’s all psychological, because it’s nothing but the same damn lock [which he had cracked on other, smaller safes].

I couldn’t help but needle him a little bit (I always had a thing about military guys, in such wonderful uniforms) so I said, "The way you close that safe, I get the idea that you think things are safe in there."

"The only reason you think they’re safe in there is because civilians call it a ‘safe.’" (I put the word "civilians" in there to make it sound as if he’d been had by civilians.)

He got very angry. "What do you mean—it’s not safe?"

"A good safecracker could open it in thirty minutes."

"Can you open it in thirty minutes?"

"I said a good safecracker. It would take me about forty-five."

"Well!" he said. "My wife is waiting at home for me with supper, but I’m gonna stay here and watch you, and you’re gonna sit down and work on that damn thing for forty-five minutes and not open it!" (Surely, 145-146)

The other two experiences (described in Surely You’re Joking and What Do You Care, respectively) of particular interest to the libertarian reader are Feynman’s time spent evaluating math textbooks and investigating the Challenger shuttle disaster. Although such a reader will not be surprised by what he finds, the stories serve as a refreshing "outside opinion" from an unbiased observer who seeks nothing but excellence in education and sanity in the space program (though Feynman has the wisdom to question whether there should even have been a "space program").

Politics aside, Surely You’re Joking and What Do You Care serve as an excellent introduction to one of this century’s finest, most independent minds. Whether being accused of sexism—for a pedagogical tale in which a woman motorist makes very informed critiques of the traffic cop’s notion of velocity—or fooling the ants in his apartment into marching back outside, Feynman always manages to entertain.