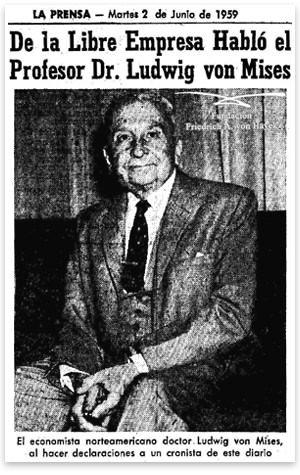 [This article is a translation of a 1959 interview in the Argentinian newspaper La Presna. It appears here in English for the first time, thanks to the Hayek Foundation.]

The Austrian-born North American economist, writer, and teacher, Ludwig von Mises, who, we are informed, arrived from New York early yesterday morning, spoke with us about his activities in Buenos Aires.

Dr. Mises, who was born in Austria and moved to the United States in 1940, has been a member and consultant of the Foundation for Economic Education in Irvington-on-Hudson, New York, since 1946. He also teaches at the business administration school of New York University (NYU) and is the author of many books on economics, translated into Spanish, including, The Theory of Money and Credit, Omnipotent Government, and The Anti-capitalistic Mentality.

He has also given talks on his areas of expertise in Great Britain, Holland, Germany, France, Italy, and other countries.

In Buenos Aires, he will give a series of talks in the Faculty of Economic Sciences with the sponsorship of the Center for the Promotion of the Free Economy, chaired by Mr. Alberto Benegas Lynch.

The visitor told us he "deeply believes in the benefits of free enterprise," and considers that "only a free-market economy can resolve the problems of the current world, at the national as well as in the international level, including — he added — the question of peace between nations."

Dr. Mises insisted that "most international conflicts could be eliminated by the general acceptance of the principles of free trade and the conditions of a free economy."

He later talked to us about the problem of inflation, saying that "the most unfortunate factor in the current economic structure of western countries is the one constituted by the inflationary policies that in greater or less degree are practiced in all of them, including the United States."

He mentioned governments' unbalanced budgets, and "how governments, in order to tackle their deficits, appeal to tax increases. When taxes are not enough, because taxable sources are exhausted, they embrace the policy of monetary emission without backing collateral, falling into spiraling inflation, a process that — if not tackled — leads to a real maelstrom."

Dr. Mises alluded to some monetary signs of an accentuated trend towards depreciation.

In reference to the reactions against the inflationary process, he noted the "healthy reaction in France, where General de Gaulle tries to fight budget deficits, aiming to restore the finances of his country." He added that "maybe he will find imitators in other western countries," and he made clear that his approval of the Gaullist policy was for the financial policies mentioned.

He added later that "regarding this, the French government is applying the policy adopted with success by Dr. Adenauer's government in West Germany." He also said that "the economic measures that the German government took to this effect, were taken against the will of the occupying Western powers; only after they were applied was it seen how beneficial they were for the consolidation of a healthy currency and for German economic development."

He expressed later that "the other nations of Western Europe are also implementing healthy currency policies, and they have found, through this path, the way of combating the ills of inflation, realizing that only with this financial policy can a solidly funded economic development be carried forward."

Dr. Mises also talked about "the enormous development reached by the United States" and how "the system of free enterprise is what has allowed this progress, prosperity, and way of life."

He also said that "many admire the portentous achievements of that country, but not all see — or at least fully consciously — how they are the result of the free-enterprise system and the actions of free individuals ."

We later asked the visitor about Argentina's economic troubles and the possibilities of a recovery, and he told us that "at the end of the last world conflagration, other countries found themselves in far worse conditions and with much more serious problems than Argentina faces today, and they were able to recover and even develop a flourishing economy."

He pointed out the importance of the financial aspect in every economic recovery program, and repeated the "need to combat inflation."

Finally he told us about the conferences he will give in the coming days, and how these and other economic themes will be discussed there.

Today He Will Give the First Conference

Dr. von Mises will give his first conference today at 7:15 PM in the assembly hall of the Faculty of Economic Sciences where he will talk about "The Achievements of Industrial Revolution and Capitalism." The dean of the faculty, Dr. William Lesley Chapman, will open the event, and Mr. Alberto Benegas Lynch, president of the Center for the Promotion of the Free Economy will introduce the speaker.

Dr. Mises will give his talk in English; headsets to listen to the simultaneous translation into Spanish will be provided to participants who ask for them. It will also be possible to listen through loudspeakers in an adjacent classroom.

The visitor will give five other talks, scheduled at the same time and place in the days that follow: