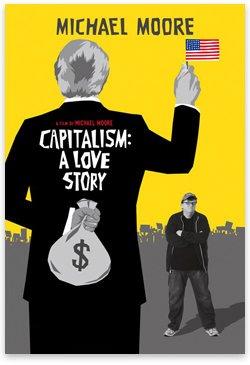 A friend recently invited me to a private screening of Michael Moore's new film, Capitalism: A Love Story.

The September 16 invite, not surprisingly, leaned in a certain direction:

Moore takes us into the homes of ordinary people whose lives have been turned upside down; and he goes looking for explanations in Washington, DC and elsewhere. What he finds are the all-too-familiar symptoms of a love affair gone astray: lies, abuse, betrayal and 14,000 jobs being lost every day. Capitalism: A Love Story is Michael Moore's ultimate quest to answer the question he's posed throughout his illustrious filmmaking career: Who are we and why do we behave the way that we do?

Considering Moore was going to be there for a Q&A after (moderated by Arianna Huffington), I quickly signed on. Now before painting a picture of Moore's new film, let me be honest: my belief set is essentially libertarian ("Government out of my bedroom and my pocketbook"). Not only do government solutions not excite me, they scare the living blank out of me. Remember when George Bush declared, "I've abandoned free-market principles to save the free-market system to make sure the economy doesn't collapse"? He might as well of said, "Hide your money, kids — 'cause I'm coming to take it!"

Oh sure, in theory I would like to see everyone with their own homestead, money in their pocket for regular shopping frenzies, and no health worries despite eating at Burger King 24/7, but arriving at those goals is not exactly doable unless government robs Peter to pay Paul and/or starts up the printing press.

And that view of course puts me in opposition to Moore since he has no problem with government as his and our father figure. That is his utopia. He truly believes that warehouses of federal workers, in Washington, D.C., remotely running our lives is the optimal plan. He is an unapologetic socialist who really doesn't care why the poor are poor or the rich are rich, he just wants it fixed. So not surprisingly — and with some generalization as I proffer this — Democrats like Moore and Republicans don't.

However, I was excited to see a "mainstream" film that was backed by big Hollywood bucks conclude capitalism is "evil." Arguably the most successful documentarian ever — a man who has made untold millions of dollars — was going to legitimately make the case that there was an alternative to capitalism. I sat down in a packed Mann's Bruin Theatre in Westwood, California, eager to see how his vision could possibly flesh out.

Moore is a rather simple guy. He is likable. He sees the world as good guys (people with no money) and bad guys (people with money). His Flint, Michigan, union-worker upbringing is his worldview. If you did not have that upbringing or if your life started less severe than his, you are an evil capitalist. If, on the other hand, you are a laid-off factory worker with a sixth-grade education, you are a true hero.

I don't care one way or the other that he has that view and I am not knocking union workers, but Moore sees the world through a class-warfare lens resulting in a certain agenda: force wealth to be spread amongst everyone regardless of effort.

Within minutes it was clear where Capitalism: A Love Story was headed.

We listen to heartbreaking stories of foreclosed families across America — but we don't learn why the foreclosures happened. Did these people treat their homes as piggy banks? Was there refinancing on top of refinancing just to keep buying mall trinkets and other goodies with no respect to risk or logic? We don't find out.

We meet one family that is so desperate for money that they were willing to accept $1,000 for cleaning out the house that they were just evicted from. Was it sad? Yes. But should we end capitalism due to this one family in Peoria, IL?

We are introduced to a guy whose company, called Condo Vultures, is buying and selling foreclosed properties. Since he acted like a used car salesman, the implication was that he was an evil capitalist. However, Moore doesn't tell us if his buyers were "working-class" people making smart buying decisions after prices had dropped.

We listen to Catholic priests who denounce capitalism as an evil to be eradicated. What would they put in its place and how would the new system work? The priests don't tell us.

We learn that Wal-Mart bought life insurance policies on many workers. We are then told to feel outrage when Wal-Mart receives a large payout from an employee death while the family still struggles with bills. I saw where Moore was heading here, but is this a reason to end capitalism?

We hear a story from a commercial pilot so low on money that he has to use food stamps. Moore points out that many pilots are making less than Taco Bell managers and then attributes a recent plane crash in Buffalo to underpaid pilots. This one crash is extrapolated as yet another reason to end capitalism.

I was pleasantly surprised at Moore's attempt at balance. For example, he included a carpenter who, while boarding up a foreclosed home, says, "If people pay their bills, they don't get thrown out."

There is also a dressing-down of Senator Chris Dodd (D) by name. Moore called out a top Democrat? He sure did. He nailed him.

There is a lengthy dissertation on the evils of Goldman Sachs. He rips Robert Rubin and Hank Paulson big time, and I agree with him. In fact, I said to myself, "Moore, you should have done your whole film on Goldman Sachs!"

Throughout the various stories and interviews he also weaves a conspiracy theory (all Moore films do this). The plot goes something like this: America won World War II and quickly dominated because there was no competition (Germany and Japan were destroyed). We had great postwar success where everyone lived in union-like equality. Jobs were plentiful and families were happy. However, things started to go bad in the 1970s — here Moore uses a snippet of President Carter preaching about greed. This clip was predictably building to Moore's big reason for all of today's problems: the Reagan Revolution.

Moore sees Reagan entering the scene as a shill for corporate-banking interests. However, everyone is happy as the good times roll all the way through into Clinton era. Moore does take subtle shots at President Clinton, but nails his right-hand economic man, Larry Summers, directly as a primary reason for the banking collapse. While Moore sees Japan and Germany today as socialistic winners where corporations benefit workers more than shareholders, he sees America sinking fast.

So is that it? That was the proof that capitalism is an evil to eliminate? Essentially, yes, that's Moore's proof.

What is his solution? Tugging on your idealistic heartstrings of course! Moore ends his film with recently uncovered video of FDR talking to America on January 11, 1944. Looking into the camera, a weary FDR proposed what he called a second Bill of Rights — an economic Bill of Rights for all — regardless of station, race, or creed — that included

As FDR concluded and the film ended, I was shocked at the reaction. The theater of 400-plus spectators stood and cheered wildly at FDR's 1944 proposal. The questions running through my head were immediate: how does one legislate words like useful, enough, recreation, adequate, decent, and good? Who decides all of this and to what degree?

Interestingly, during the Q&A, Huffington and Moore discussed bank-failure fears during the fall of 2008. They asked for a show of hands of how many people moved money around or attempted to protect against a bank failure. I had the only hand that went up.

FDR's plan, hauled out by Moore six decades after it was forgotten, reminded me of another interchange — this one from the 1970s. Then talk-show master — the Oprah of his day — Phil Donahue was interviewing free-market economist Milton Friedman and wanted to know if Friedman had ever had a moment of doubt about "capitalism and whether greed's a good idea to run on?"

Friedman was quick in response:

Is there some society you know that doesn't run on greed? You think Russia doesn't run on greed? You think China doesn't run on greed? … The world runs on individuals pursuing their separate interests. The great achievements of civilization have not come from government bureaus. Einstein didn't construct his theory under order from a bureaucrat. Henry Ford didn't revolutionize the automobile industry that way. In the only cases in which the masses have escaped from the kind of grinding poverty you're talking about, the only cases in recorded history are where they have had capitalism and largely free trade. If you want to know where the masses are worst off, it's exactly in the kinds of societies that depart from that. So that the record of history is absolutely crystal clear: that there is no alternative way so far discovered of improving the lot of the ordinary people that can hold a candle to the productive activities that are unleashed by a free enterprise system.

Donahue (and the video of this on YouTube is classic) then countered saying that capitalism doesn't reward virtue, but instead rewards the ability to manipulate the system. Friedman was having none of it:

And what does reward virtue? You think the communist commissar rewards virtue? … Do you think American presidents reward virtue? Do they choose their appointees on the basis of the virtue of the people appointed or on the basis of their political clout? Is it really true that political self-interest is nobler somehow than economic self-interest? … Just tell me where in the world you find these angels who are going to organize society for us?

Friedman's logic was what I was remembering as a theater full of people cheered wildly for a second Bill of Rights. How did this film crowd actually think FDR's 1944 vision could be executed? Frankly, it was clear to me at that moment that capitalism is on shaky ground. From Bush "abandoning" capitalism to bailouts for everyone, to Obama gifting away the future, we seriously might be past the point of no return toward a socialization of America.

Figuring someone else must see the problems with this film, I started poking around the net for other views. One critic declared that the value of Capitalism: A Love Story was not in the moviemaking, but in its message that hits you in the gut and makes you angry. This film did not make me angry, but it did punch me in the gut. The people in that theater with me, including Moore, were not bad people. They just seem to all have consumed a lethal dose of Kool-Aid.

At the end of his Q&A, Moore pushed the audience to understand that while they don't have the money, they do have the vote. He implored them to use their vote to take money from one group to give it to another group. Did he really say that openly with no ambiguity? Yes, sadly.

An earlier version of this article appeared on DailyReckoning.com.

Michael Covel is the author of Trend Following and The Complete TurtleTrader. His first film, "Broke: The New American Dream," premieres October 12, 2009. See his website. You can contact him here.