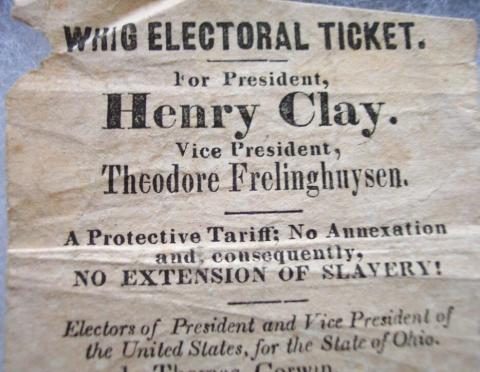 The journalist, television commentator, and former presidential candidate Patrick J. Buchanan has been sharply criticized by his fellow Republicans for allegedly betraying Republican party "free-market" principles in his book, The Great Betrayal. In the book Buchanan argues for protectionism and claims to have presented the strongest case ever made for "economic nationalism." This, his Republican critics allege, is contrary to what Republicans have always stood for.

Buchanan's critics are wrong. Pat Buchanan has picked up the mantle of the party of Lincoln and is its true political descendent. The Republican party was founded by a group of former Whigs who for decades had been lobbying for protectionist tariffs, corporate welfare for railroads and other corporations ("internal improvements"), and a central bank to finance their massive patronage schemes. They, too, fancied themselves as "economic nationalists" by labeling their policies "The American System" (a phrase coined by Henry Clay), implying that all Americans would benefit from it.

But phrases like "economic nationalism" and "The American System" are cleverly contrived deceptions that attempt to mislead the public into believing that government handouts to powerful special interest groups are somehow in everyone's interest. A more accurate term for what the late nineteenth-century Republicans stood for, and what the Buchanan wing of today's Republican party advocates, is mercantilism.

In The Logic of Action II, Murray Rothbard defined mercantilism as "a system of statism which employed economic fallacy to build up a structure of imperial state power, as well as special subsidy and monopolistic privilege to individuals or groups favored by the state."

This is exactly what Lincoln devoted his entire twenty-eight year political career to prior to being elected president. When he first entered electoral politics as a candidate for the Illinois legislature in 1832 he announced that "My politics are short and sweet, like the old woman's dance. I am in favor of a national bank...in favor of the internal improvements system and a high protective tariff."

Lincoln confided to friends that his career ambition was to be "the DeWitt Clinton of Illinois." DeWitt Clinton was the early nineteenth-century governor of New York who is credited with inventing the spoils system. He was a master string puller, political conniver, and patronage politician.

Lincoln and the Whigs (who became Republicans when the Whig party collapsed in 1856) understood that political patronage dispensed in large doses to wealthy, powerful special interests could be the key to their political success. Accordingly, they waged a decades-long battle against the U.S. Constitution which, until the invasion and conquest of the South, all but outlawed such uses of federal tax dollars.

In his 1931 book Lincoln the Man, Edgar Lee Masters, a poet, playwright, and one-time law partner of Clarence Darrow, pinpointed exactly what Lincoln and the Whig/Republican politicians of the nineteenth century were all about. Henry Clay was their champion, and he represented "that political system which doles favors to the strong in order to win and to keep their adherence to the government. His system offered shelter to devious schemes and corrupt enterprises." They advocated "a people taxed to make profits for enterprises that cannot stand alone." The Whig party had "no platform to announce, because its principles were plunder and nothing else." These men "adopted the tricks of the pickpocket who dresses himself like a farmer in order to move through a rural crowd unidentified while he gathers purses and watches."

In 1859 Lincoln proudly declared that he was "always a Whig in politics," and indeed he was. He was a master political string puller who ran the Whig party apparatus in Illinois. As leader of the Whigs in the state legislature in the 1830s he succeeded in having the legislature allocate $12 million in an absurd make-work scheme to turn Illinois into one vast system of government-subsidized canals and railroad lines.

The scheme was a colossal failure as virtually all of the money was stolen or squandered. Lincoln's law partner, William Herndon, called the scheme "reckless and unwise" and a disaster that "rolled up a debt so enormous" that it impeded Illinois' economic growth for many years. "The internal improvement system, the adoption of which Lincoln had played such a prominent part, had collapsed," Herndon wrote in his biography of Lincoln.

But to the Whig party the "internal improvements" debacle was a political success for it allowed them to take credit for the dispensation of $12 million in patronage. Once Lincoln was elected president—and for decades thereafter—the Republican party nationalized this system of "devious schemes and corrupt enterprises" by subsidizing the building of transcontinental railroads. These schemes involved so much bribery and corruption that President Ulysses S. Grant's War Secretary W.W. Belknap, his private secretary Orville Babcock, his Treasury Secretary W.W. Richardson, his ambassador to England, Robert Schenck, and dozens of Republican congressmen were convicted of crimes or forced to resign because of their shady dealings. This was all an inevitable consequence of their mercantilist schemes dressed up in the language of economic nationalism.

Lincoln was a lifelong protectionist who absurdly argued against free trade on the grounds that the process of trade involved "useless labor" in transporting goods from one country to another. Moreover, it is fair to say that the one overriding objective of the Republican party in 1860 was to raise tariffs, which it did.

The Whigs had been the champions of protectionism beginning in the early 1830s. With the demise of the Whig party in 1856 the Republicans took up the protectionist mantle. In 1859 the United States was as close to the free trade ideal as it has ever been. But by 1865 tariff rates had risen to close to 50 percent, on average, and remained high for decades after the war.

In the late 1850s the Republican party was dominated by former Whigs who, like Lincoln, were essentially power-hungry egomaniacs who dreamed of accumulating power and riches through constitutionally dubious patronage schemes. Their dreams came true during and after the War Between the States, as their mercantilist policies allowed them to virtually monopolize American politics for decades. The political plundering of citizens and taxpayers for the benefit of the politically powerful was a drag on the U.S. economy, but was the key to the Republicans' political successes. So-called economic nationalism is nothing but mercantilism reinvented.