The Meaning of Financial Repression 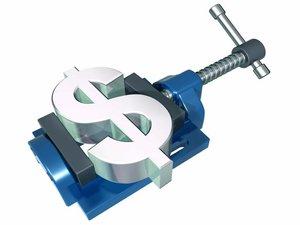 We live in a world of massive monetary inflation and extremely low interest rates. Mortgage rates are near historic lows and yet it seems that people cannot get loans. Home sales are up, but with a near record percentage of sales made with cash, rather than a mortgage. The unemployment rate is nearing "full employment" and yet a record number of people do not have jobs.

We are repeatedly told that the unprecedented monetary stimulus by the Federal Reserve and other central banks is necessary to stimulate the economy, create jobs, and generate economic growth. The truth is that this scheme is designed to stealthily steal from the productive classes in order to enrich the unproductive financial class and the counterproductive political classes. It is a con game.

With politicians and central bankers seemingly gone mad with their obsession for money printing and ultra low interest rates, it is nice to know that academic economists have a term (i.e., financial repression) for the policies that have created our current economic conditions.

However, it is not a new term. Its use dates back to at least 1973 when two Stanford University economists, Edward Shaw and Ronald McKinnon, used the term in separate publications. The phrase was initially meant to criticize various policies that reduced economic growth in undeveloped countries, rather than as an indictment of the world’s leading modern economies.

Financial repression is a revolving set of policies where the government insidiously takes wealth from the private sector, and more specifically makes it easier for government to finance its debt. In today’s environment this includes:

These are the two major policies of financial repression currently in use. The combination of the two policies has allowed governments to borrow money, both short- and long-term bonds, at extremely low interest rates. This, in turn, has kept the government’s interest payments on the national debt relatively low.

Other signs of financial repression in the United States include requiring banks to hold government bonds for their capital requirements, which the Basil III accords increased; high reserve requirements, which paying interest on excess reserves effectively accomplishes; and capital controls that restrict or tax the exportation of wealth. And then there is the “War on Cash.”

All these policies also come under the rubric of “macroprudential policy” under which government bureaucrats hyper-regulate and oversee the entire financial industry. Macroprudential policy provides another aspect of financial repression: government control or outright ownership of banks and financial institutions while simultaneously providing banks with barriers to competition. It is difficult to precisely define macroprudential policy, but it would seem to mean a group of imprudent policies that only make sense if you are trying to maintain the macro mess we find ourselves in.

When you combine financial repression with bail-in provisions for banks and unstable currencies you end up with the nearly unfathomable phenomenon of negative nominal interest rates on government bonds. Several European countries have already sold two-year bonds for more than their face value, so that bond buyers are paying more than 1,000 euros for which they will only receive 1,000 euros in two years time.

Why would anyone accept that deal if you could just hold the 1,000 euros in cash? Well, there is the natural inclination to keep your money safe in a bank. So people with vast sums of money do not want to keep several million euros in cash. They would rather keep it in a bank and earn interest.

The problem with that approach is that banks are not paying interest and, more importantly, some governments have established bail-in provisions for systemically important big banks, similar to what happened during the financial crisis in Cyprus. These provisions mean that depositors in failed banks will receive “haircuts” for any uninsured deposits. A “haircut” means depositors would lose some percentage of their uninsured deposits. Alternatively, uninsured bank deposits and bonds could be exchanged for equity shares in the bank.

So, for wealthy depositors it might make sense to pay more than the face value for a government bond if they think that the governments are more trustworthy and more likely to redeem the bond compared to their bank redeeming their deposits.

An alternative reason for bondholders’ willingness to pay more than the face value of a bond is unstable currencies and exchange rates. If I live in the eurozone and expect the euro to depreciate against the Swiss franc or the Norwegian kroner, then you might consider buying Swiss and Norwegian government bonds with negative nominal returns based on the expectation that you will still be better off than if you bought bonds denominated in euros.

The Effects of Bad Government

Financial repression is an outgrowth of bloated government budgets and enormous government debts. It is the worst way of dealing with government debt and actually works against the proper ways of addressing fiscal problems which include: eliminating government programs, eliminating military bases, austerity based on cutting politicians and government employees’ salaries and benefits, and deregulation and privatization to increase economic growth.

The effects of financial repression cause economic harm throughout the productive sectors of the economy including workers, savers, entrepreneurs, retirees, and pensions. It hurts the insurance industry that protects our lives, homes, health, and property. The economic beneficiaries include the big banks and Wall Street, the national government itself, and certain large corporations.

Carrying on the Traditions of Bad Government

In Siena, Italy, the fourteenth-century frescoes called The Allegory of Good and Bad Government are housed in the old city hall on the Piazza del Campo. Good government is based on peace, resilience, prudence, fairness, and self-control with a special emphasis on justice. Good government is depicted on the right side of the hall as thriving commerce, productive labor, and good economic conditions.

Across the room is the mirror image of bad government. It is based on cruelty, deceit, fraud, rage, division, war, greed, arrogance, and excessive pride. The effects of bad government are depicted with the city in ruins, demolished houses, and no commerce except for the making of armor and weapons. The city streets are deserted and out in the country two armies are poised for war.

On the side of good government sits an image of justice on a throne. Across the room, an image of tyranny sits on the throne. The panorama of the frescos is breathtaking and all too accurate, and financial repression is merely the latest contribution of the modern state to the concept of bad government.