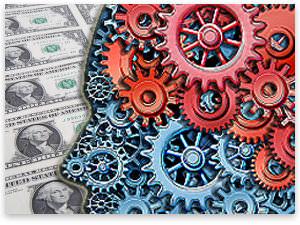 The term materialism as applied in contemporary speech has two entirely different connotations.

The first connotation refers to values. It characterizes the mentality of people who desire only material wealth, bodily satisfactions, and sensuous pleasures.

The second connotation is ontological. It signifies the doctrine that all human thoughts, ideas, judgments of value, and volitions are the product of physical, chemical, and physiological processes going on in the human body. Consequently materialism in this sense denies the meaningfulness of thymology and the sciences of human action, of praxeology as well as of history; the natural sciences alone are scientific. We shall deal in this chapter only with this second connotation.

The materialist thesis has never yet been proved or particularized. The materialists have brought forward no more than analogies and metaphors. They have compared the working of the human mind with the operation of a machine or with physiological processes. Both analogies are insignificant and do not explain anything.

A machine is a device made by man. It is the realization of a design and it runs precisely according to the plan of its authors. What produces the product of its operation is not something within it but the purpose the constructor wanted to realize by means of its construction. It is the constructor and the operator who create the product, not the machine. To ascribe to a machine any activity is anthropomorphism and animism. The machine has no control over its running. It does not move; it is put into motion and kept in motion by men. It is a dead tool which is employed by men and comes to a standstill as soon as the effects of the operator's impulse cease. What the materialist who resorts to the machine metaphor would have to explain first of all is: Who constructed this human machine and who operates it? In whose hands does it serve as a tool? It is difficult to see how any other answer could be given to this question than: It is the Creator.

It is customary to call an automatic contrivance self-acting. This idiom too is a metaphor. It is not the calculating machine that calculates, but the operator by means of a tool ingeniously devised by an inventor. The machine has no intelligence; it neither thinks nor chooses ends nor resorts to means for the realization of the ends sought. This is always done by men.

The physiological analogy is more sensible than the mechanistic analogy. Thinking is inseparably tied up with a physiological process. As far as the physiological thesis merely stresses this fact, it is not metaphorical; but it says very little. For the problem is precisely this, that we do not know anything about the physiological phenomena constituting the process that produces poems, theories, and plans. Pathology provides abundant information about the impairment or total annihilation of mental faculties resulting from injuries of the brain. Anatomy provides no less abundant information about the chemical structure of the brain cells and their physiological behavior. But notwithstanding the advance in physiological knowledge, we do not know more about the mind-body problem than the old philosophers who first began to ponder it. None of the doctrines they advanced has been either proved or disproved by newly won physiological knowledge.

Thoughts and ideas are not phantoms. They are real things. Although intangible and immaterial, they are factors in bringing about changes in the realm of tangible and material things. They are generated by some unknown process going on in a human being's body and can be perceived only by the same kind of process going on in the body of their author or in other human beings' bodies. They can be called creative and original insofar as the impulse they give and the changes they bring about depend on their emergence. We can ascertain what we wish to about the life of an idea and the effects of its existence. About its birth we know only that it was engendered by an individual. We cannot trace its history further back. The emergence of an idea is an innovation, a new fact added to the world. It is, because of the deficiency of our knowledge, for human minds the origin of something new that did not exist before.

The champions of materialism are intent upon pointing out the untenability of all other doctrines that have been advanced for the solution of the mind-body problem. They are especially zealous in fighting the theological interpretation. Yet the refutation of a doctrine does not prove the soundness of any other doctrine at variance with it.

Perhaps it is too bold a venture for the human mind to speculate about its own nature and origin. It may be true, as agnosticism maintains, that knowledge about these problems is forever denied to mortal men. But even if this is so, it does not justify the logical positivists' condemning the questions implied as meaningless and nonsensical. A question is not nonsensical merely because it cannot be answered satisfactorily by the human mind.

A notorious formulation of the materialist thesis states that thoughts stand in about the same relation to the brain as the gall to the liver or urine to the kidneys. As a rule materialist authors are more cautious in their utterances. But essentially all they say is tantamount to this challenging dictum.

Physiology distinguishes between urine of a chemically normal composition and other types of urine. Deviation from the normal composition is accounted for by certain deviations in the body's physique or in the functioning of the body's organs from what is considered normal and healthy. These deviations too follow a regular pattern. A definite abnormal or pathological state of the body is reflected in a corresponding alteration of the urine's chemical composition. The assimilation of certain foodstuffs, beverages, and drugs brings about related phenomena in the urine's composition. With hale people, those commonly called normal, urine is, within certain narrow margins, of the same chemical nature.

It is different with thoughts and ideas. With them there is no question of normalcy or of deviations from normalcy following a definite pattern. Certain bodily injuries or the assimilation of certain drugs and beverages obstruct and trouble the mind's faculty to think. But even these derangements are not uniform with various people. Different people have different ideas, and no materialist ever succeeded in tracing back these differences to factors that could be described in terms of physics, chemistry, or physiology. Any reference to the natural sciences and to material factors they are dealing with is vain when we ask why some people vote the Republican and others the Democratic ticket.

Ideas influence one another, they provide stimulation for the emergence of new ideas, they supersede or transform other ideas. All that materialism could offer for the treatment of these phenomena is a metaphorical reference to the notion of contagion. The comparison is superficial and does not explain anything. Diseases are communicated from body to body through the migrations of germs and viruses. Nobody knows anything about the migration of a factor that would transmit thoughts from man to man.

The Political Implications of Materialism

Materialism originated as a reaction against a primeval dualistic interpretation of man's being and essential nature. In the light of these beliefs, living man was a compound of two separable parts: a mortal body and an immortal soul. Death severed these two parts. The soul moved out of sight of the living and continued a shadow-like existence beyond the reach of earthly powers in the realm of the deceased. In exceptional cases it was permitted to a soul to reappear for a while in the sensible world of the living or for a still living man to pay a short visit to the fields of the dead.

These rather crude representations have been sublimated by religious doctrines and by idealistic philosophy. While the primitive descriptions of a realm of souls and the activities of its inhabitants cannot bear critical examination and can easily be exposed to ridicule, it is impossible both for aprioristic reasoning and for the natural sciences to refute cogently the refined tenets of religious creeds. History can explode many of the historical narrations of theological literature. But higher criticism does not affect the core of the faith. Reason can neither prove nor disprove the essential religious doctrines.

But materialism as it had developed in 18th-century France was not merely a scientific doctrine. It was also a part of the vocabulary of the reformers who fought the abuses of the ancien régime. The prelates of the Church in royal France were with few exceptions members of the aristocracy. Most of them were more interested in court intrigues than in the performance of their ecclesiastical duties. Their well-deserved unpopularity made antireligious tendencies popular.

The debates on materialism would have subsided about the middle of the 19th century if no political issues had been involved. People would have realized that contemporary science has not contributed anything to the elucidation or analysis of the physiological processes that generate definite ideas and that it is doubtful whether future scientists will succeed better in this task. The materialist dogma would have been regarded as a conjecture about a problem whose satisfactory solution seemed, at least for the time being, beyond the reach of man's search for knowledge. Its supporters would no longer have been in a position to consider it an irrefutable scientific truth and would not have been permitted to accuse its critics of obscurantism, ignorance, and superstition. Agnosticism would have replaced materialism.

But in most of the European and Latin American countries Christian churches cooperated, at least to some extent, with the forces that opposed representative government and all institutions making for freedom. In these countries one could hardly avoid attacking religion if one aimed at the realization of a program that by and large corresponded with the ideals of Jefferson and of Lincoln. The political implications of the materialism controversy prevented its fading away. Prompted not by epistemological, philosophical, or scientific considerations but by purely political reasons, a desperate attempt was made to salvage the politically very convenient slogan "materialism." While the type of materialism that flourished until the middle of the nineteenth century receded into the background, gave way to agnosticism, and could not be regenerated by such rather crude and naive writings as those of Haeckel, a new type was developed by Karl Marx under the name of dialectical materialism.

This article is excerpted from Theory and History: An Interpretation of Social and Economic Evolution (1957), chapter 6, "Materialism." This chapter is available in audio, as narrated by John Pruden.
Author: