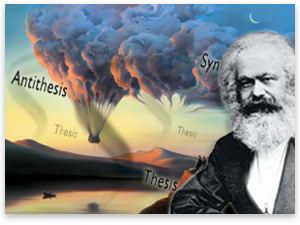 Marx desperately sought a materialistic dialectic of history, a dialectic that would account for all basic historical change and would lead inevitably to communist revolution. Lacking a Boehmeian "nisus" or mystical inner drive to serve as motor of the dialectic, Marx had to fall back on class conflict embedded in historical materialism. But it was characteristic of Marx that this crucial area of the Marxian system, along with other important discussions, was presented, not systematically, but in the course of fugitive paragraphs or even passages, here and there throughout the writings of Marx and Engels. The system has to be constructed out of these widely separated passages. As a result, or perhaps from the inherently grave weakness of the argument, Marx's terminology is invariably vague and fuzzy, and his allegedly law-like linkages of the dialectic virtually nonexistent. Often they are mere unsupported assertion. As a result, the Marxian system is not only a tissue of fallacies, but of flimsy fallacies and linkages as well.

No economic or social theory is obliged to come up with correct predictions, in the sense of forecasts of the future. But the Marxian doctrine is different. Like premillennial pietists who are forever predicting an imminent Armageddon, Marx claims to come up with "laws of history" which, according to him, are "scientific" rather than mystical. Well, if he knows the laws of history, then Marx had better come up with correct predictions of such allegedly determined laws. Yet all his predictions have proved utterly wrong. At this point, Marxists invariably fall back on changing the prediction, or pointing to some offsetting factor (seen only in hindsight) that temporarily delayed the prediction from coming true. Thus, as we shall see further below, one of Marx's predictions, crucial to the inevitable workings of the road to socialism, was that the working class would suffer increasing poverty and immiseration. When the working classes, in contrast, obviously continued to gain spectacularly in living standards in the Western world, Marxian apologists fell back on the assertion that Marx meant only poverty "relative to" the capitalist class. It is doubtful, however, whether bloody revolution will be waged by a proletariat for having only one yacht while capitalists have a dozen each. "Relative" misery is a very different kettle of fish. The Marxists then came up with the view that Western workers' standards of living were rising because of a "temporary" delay brought about by Western imperialism, enabling Western workers to be "capitalists" relative to the exploited Third World. The fact that Marx and Engels were themselves in favor of Western, particularly German, imperialism, as a progressive force, is usually passed over in silence by Marxian writers.

On theoretical matters, the strategy of Marxists is similar. Increasingly, as crucial Marxian doctrines become evidently too absurd to be held seriously — e.g., technological determinism of all life, or the labor theory of value — they are abandoned by the Marxist, who then proceeds to maintain stubbornly that he is still a "Marxist," and that Marxism essentially still holds true. But this is the attitude of a mystical religious adept rather than of a scientific or even a rational thinker.

One crucial weapon wielded often by Marxists and by Marx himself was "the dialectic." Since the dialectic allegedly means that the world and human society consist of conflicting or "contradictory" tendencies side by side or even within the same set of circumstances, any prediction can then be justified as the result of one's deep insight into whichever part of the contradictory dialectic might be prevailing at any given time.1 In short, since either A or non-A can occur, Marxians can safely hedge their bets so that no prediction of theirs can ever be falsified. It has been said that Gerry Healy, the absolute leader of the left-wing British Trotskyite movement until scandal brought him down in recent years, was able to maintain his power by claiming the power of exclusive insight into the mysterious workings of the dialectic. And an outstanding example of hedging one's bets by Marx himself was described in a letter to Engels. Marx writes to Engels that he has just forecast something in his column for the New York Tribune. He adds cynically and revealingly: "It is possible that I may be discredited. But in that case it will still be possible to pull through with the help of a bit of dialectic. It goes without saying that I phrased my forecasts in such a way that I would prove to be right also in the opposite case."2