Markets Are Our Best Hope for Peaceful Cooperation 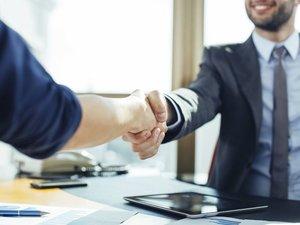 In my previous column, I noted both the fallacy that libertarianism is inherently “atomistic” as well as the scientific fact that while morality — such as the Golden Rule, may be applied universally — human cooperation and empathy are not. We are hemmed in by “Dunbar’s number” which limits the number of social relationships any one person can have at any given time to approximately 150.

The question left before us is what societal arrangement does such a nature best lend itself to. Karl Marx envisioned a future that would be “From each according to his ability, to each according to his need.” But as the biologist E.O. Wilson cleverly noted of communism, “Wonderful theory, wrong species.” Yes, what works well for ants doesn’t so much for human beings.

Humanity’s natural state is that of small tribes that have little or no contact with each other. When they do come into contact, the results have generally been bloody. It would be making the “naturalistic fallacy” to argue that because this is our natural state that we should thereby live in it. Indeed, as Steven Pinker has pointed out, studies of hunter-gatherer societies show them to be extraordinarily violent. He quotes the work of the archaeologist Lawrence Keeley, showing that for eight separate tribal societies, the percentage of male deaths caused by warfare “… range from 10 percent to almost 60 percent.”1

Furthermore, some of the unfortunate side effects of this mental limit are racism and xenophobia and contrary to many leftist, pseudo-agrarian fantasies, these are actually more acute in such tribal societies. As Robin Dunbar, Louise Barrett, and John Lycett note,

In many, if not most, such societies, the word which refers to members of the tribe is usually best translated as “men” or “humans”; those who belong to all other tribes are, by extension, considered to be “not-men.”2

Steven Pinker credits the growth of the state as a method to tame such violence. We’ll leave aside any debate between anarchism and minarchism for now, but Pinker’s claim is highly suspect. R.J. Rummel’s estimates for the number of people governments have murdered (not including war) during the twentieth century alone came out to 262 million! At the very least, this should make it obvious that any sort of totalitarian or oligarchical government is not the best way for human societies to be structured.

To his credit, Steven Pinker does support strongly limiting the state’s power. He emphasizes how liberalizing economic policy was a major factor in the reduction of world violence, particularly people thinking more like a (classically liberal) economist, “That sets [them] in opposition to populist, nationalist, and communist mindsets that see the world's wealth as zero-sum and infer that the enrichment of one group must come at the expense of another.”3

Of course he credits many other things, including, as many others have, democracy.

Democracy Can Not Be Applied Universally

While democracy is certainly preferable to totalitarianism, it falls back to many of the same fallacies regarding universalism that the Left has made regarding human nature.

Indeed, what if we had a worldwide democratic government that somehow — however unlikely — maintained strong democratic institutions in spite of facing no competition from other states? Would the Chinese voters simply bow to the whims of the global majority, if it was contrary to the interests of the Chinese voters? Or more likely, given their population, would the voters in the United States bow to the will of Chinese voters?

Democracy may be a useful tool, but its best application is at the local level where the individual vote actually means something. Unfortunately, many proponents of democracy see it as something that it is clearly not; a method for universal cooperation. Given that the research has clearly shown such universalizable cooperation is a utopian fantasy, what does that make democracy?

Cooperation is a great thing, but it has only been shown to work in small groups. All that’s left with regards to large group interactions is force or exchange. So democracy, on a large scale, is merely people voting on if, when and how to use force against each other.

It’s for this reason that so-called anarcho-syndacilism or anarcho-communism would fail. As Murray Rothbard pointed out,

All of the left-wing anarchists have agreed that force is necessary against recalcitrants. But then the first possibility means nothing more nor less than Communism, while the second leads to a real chaos of diverse and clashing communisms, that would probably lead finally to some central Communism after a period of social war. Thus, left-wing anarchism must in practice signify either regular Communism or a true chaos of communistic syndics. In both cases, the actual result must be that the State is reestablished under another name. It is the tragic irony of left-wing anarchism that, despite the hopes of its supporters, it is not really anarchism at all. It is either Communism or chaos.

It should be no surprise that any such examples were short-lived, usually existed at a time of war where a clear opponent could rally people together and were not nearly as pleasant as many of their proponents seem to believe. The Paris Commune executed some hundred priests and clergymen and as Bryan Caplan puts it, the Spanish Anarchists of the 1930s carried out “… large-scale murders of people believed to be supporters of the Nationalists.”

Of course, the list of sins of official governments is much, much longer (the French government killed many more people than the Commune during that conflict). But the few examples help prove the rule of anarcho-syndacilism inherent flaws. It should further be noted that many similar experiments were tried in the United States in the nineteenth century with little success, even on a relatively small scale. Here’s Jonathan Haidt’s description of the anthropologist Richard Sosis’s work on the subject,

… [Sosis] examined the history of two hundred communes founded in the United States in the nineteenth century. Communes are natural experiments in cooperation without kinship. Communes can survive only to the extent that they can bind a group together, suppress self-interest, and solve the free rider problem. … For many nineteenth-century communes, the principles were religious; for others they were secular, mostly socialist … just 6 percent of the secular communes were still functioning twenty years after their founding.4

The religious communes did better, with 39 percent still going after twenty years. But that still leaves a lot to be desired. And remember, these were small-scale communes filled with people from a similar culture who joined voluntarily, not large states with millions and millions of people of different cultures spread across a large geographic region.

While there’s no libertarian objection to such communes, they simply do not represent a universalizable system to emulate. On a large scale, we are simply left with the three choices that Frederic Bastiat so aptly pointed out;

1. “The few plunder the many
2. Everybody plunders everybody.
3. Nobody Plunders anybody.”5

No matter how you organize society, people will arrange themselves into shifting, but relatively stable small groups. Families and kin will generally care more for each other than strangers and so on. While “othering” of any sort is an obvious concern when coming to the conclusion that human beings naturally form small groups and see the others as outsiders. I can see no better way to soften these relations than by engaging in mutually beneficial trade. It may not be utopian, but it’s certainly better than using force (be it through tyranny or democracy) to bring other people and groups into line with one’s own desires.

It should also be noted that there is a great irony in the government for being labeled as an institution to bring about the community such “atomistic” libertarians oppose. In the early twentieth century, vast numbers of workers belonged to various mutual aid societies that provided assistance when needed, medical and other services as well as a sense of comradery. Mutual aid societies, just like all sorts of businesses, churches, charities, and social groups, represented just another example of human’s ability to self-organize.

However the mutual aid societies were short-lived. The large expansion of the welfare state in the 1960s all but supplanted these voluntary institutions with the cold, faceless bureaucracies no rational person could describe as communal.

What about family? This is certainly one of the least atomistic arrangements that exist. Well, after the government implemented welfare and supplanted the traditional role of the father, family formation, divorce, and illegitimacy rates skyrocketed. In 1960, out-of-wedlock births made up about 6 percent of the total. Today, they are over 40 percent.

And the strain put on military families and communities when the government decides to go to war should be self-evident.

The best way to evaluate the strength of communities are various tools to measure what is called social capital (basically social networks buttressed by trust, reciprocity, and cooperation). Robert Putnam has found that most forms of social capital began to precipitously decline after the implementation of The Great Society programs of the 1960s. For example, he finds that membership in voluntary associations “… peaked in the early 1960’s, and began the period of sustained decline by 1969.”6

While Putnam believes the welfare state actually ameliorated the fall of social capital, the timing seems unlikely. Charles Murray, another social scientist, has made the case that happiness and social capital are built on four virtues; industriousness, honesty, marriage, and religion. And the government interferes with each to varying degrees. For example, welfare dependency reduces industriousness and incentivizes family breakdown and a lack of family formation. This argument certainly fits better with the timeline and what we know about human nature.

This is especially true given that force is not a good means to build a cooperative society and the government uses little more than force.

No, the government destroys a sense of community and pits groups of people against each other. Human societies organize naturally through voluntary means, just as libertarians have predicted. And furthermore, a market economy based on mutually beneficial trade is the only way yet found for multiple groups of disparate and overlapping “tribes” or groups of “Dunbar’s numbers” to live peacefully and prosperously in a large, interconnected, and complex modern society.