The Market Function of Piracy 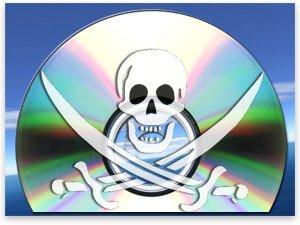 In marketing the most effective way to introduce new products is the free sample. In 1978 Lever Brothers spent $15 million ($47.55 million in today's currency) delivering a free sample of Signal Mouthwash to two-thirds of all US households. The strategy was a success and the product remained on the market well into the 1990s.

The significance of the free sample is product trial; it gets the product into consumers' hands. If consumers use the sample and like it, they may go on to buy the product and buy it again and again, that is, become repeat purchasers; they may even spread the good word to others. When repeat purchasing and favorable word of mouth kick in, the product's sales will experience a shift from slow to rapid growth and management will consider the product a success.

Free sampling is the best method of introducing new products, but it is also the most expensive. Not surprisingly, then, Forbes ASAP magazine[1] reports this alternative way to practice free sampling:

One security manager for a major manufacturer, who asked not to be identified, says she is sure some companies actually view being counterfeited as a boon to their efforts to build brand awareness. After all, she says, if some companies give away merchandise to expand market share, what's not to like about having someone else take on the expense of manufacturing and distributing the goods, as long as they're high-quality copies?

Imitation is a universal trait of human behavior, ranging from the use of phrases and mannerisms of admired others to the reuse of hummable themes in music, recognizable images in paintings and well-known plots in literature and Disney movies. Imitation is a normal part of the competitive process in growth markets. As the sales of an innovative new product takes off, competitors enter the market with their own, often cheaper, versions.

If the innovative product is patented, competitors make minor design or functional changes to secure their own patents. Knock-offs are unauthorized, usually cheaper copies. And, of course, the innovative marketer often produces its own cheap version, sometimes called a fighting brand, to fend off the competition. Over time real prices in the product category decline and quality improves.

Knock-offs are pirated products. Because they are usually cheaper than the original, knock-offs tend to appeal to a more price-conscious segment of the market; that is, the buyers of pirated products are probably not legitimate prospects for the innovative new product, either because they cannot afford, or do not want to pay, the higher price. Message to the innovative marketer? Either drop the price of the new product or produce a cheaper version — or be the first to exploit a new technology, something the movie and recording industries chose not to do.[2] Many, including these two industries, would rather sue than practice good marketing.

One study found that users of pirated software sufficiently influenced — by word-of-mouth communication — eighty percent of the software's prospects to buy the legal product and another described several scenarios in which piracy can help increase the sales of legal products.[3] The pirated product functions as a free sample that the innovator does not have to fund.

So what about free copies? How do you compete with free, to state the battle cry of the new Luddites who fear digital technology? It's done all the time. One of the most dramatic recent instances of this was the strategy of science fiction writer Cory Doctorow who, over the course of three years, gave away 700,000 electronic copies of Down and Out in the Magic Kingdom. Sales of the hard copy went through six printings and surpassed his publisher's expectations. Many of the downloaders, Doctorow said, did not buy the hard copy and probably would not have regardless, but the giveaway created considerable buzz and a significant minority did buy the hard copy. Compare this to the experience of the Mises Institute with Omnipotent Government.

Free — no matter where it comes from — can help sell.

[3] Moshe Givon, Vijay Mahajan, and Eitan Muller, "Software Piracy: Estimation of Lost Sales and the Impact on Software Diffusion," Journal of Marketing, 59:1 (January 1995), 29–37; Julio O. de Castro, David B. Balkin, and Dean A. Shepherd, "Knock-Off or Knockout?," Business Strategy Review, Spring 2007, 28–32. Thanks to Gil Guillory on the Mises Scholars List for alerting me to the former study.

Jerry Kirkpatrick is professor of international business and marketing at California State Polytechnic University, Pomona, and author of In Defense of Advertising: Arguments from Reason, Ethical Egoism, and Laissez-Faire Capitalism