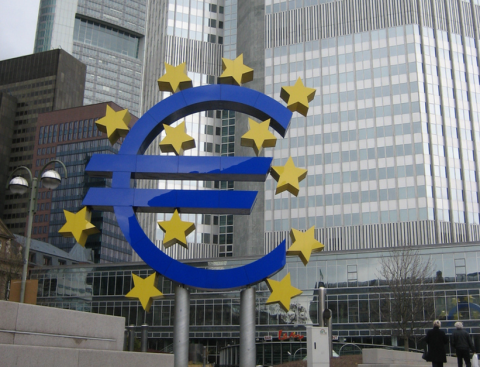 On 23 August 2017, the president of the European Central Bank (ECB) gave a speech titled “Connecting research and policy making” at the annual assembly of the winners of the Nobel Price for Economics in Lindau, Germany.1 What Mr Draghi talked about on this occasion — and especially what he didn’t talk about — was quite revealing.

Any analysis of the causes of the latest financial and economic crisis is conspicuously absent from Mr Draghi’s remarks. One gets the impression that the crisis came basically unexpected, out of the blue. There is no mention of the role of central banks, the monopoly producers of unbacked paper (or: fiat) money, played for the crisis.

No word that central banks had for many years manipulated downwards interest rates — accompanied by an excessive increase in credit and money supply — causing an unsustainable “boom.” When the bust set in — triggered by the spreading of the US subprime crisis across the globe — the ugly consequences of this central bank monetary policy came to the surface.

In the bust, many governments, banks and consumers in the euro area found themselves financially overstretched. The economies of Southern Europe especially do not only suffer from malinvestment on a grand scale, they also found themselves in a situation in which they have lost their competitiveness.

The analogy to such a line of argumentation would be praising a drug dealer, who provides the drug addict (who became a drug addict because of him) with just another shot. Repeated consumption of drugs does not heal but damages drug addict. Who would applaud what the drug dealer does? Likewise: would it be appropriate to praise the ECB’s action?

Mr Draghi presents himself as a fairly modest, intellectually ‘undogmatic’ central bank president stressing the importance of the insights produced by economic research for real life monetary policy making (thereby dutifully applauding the output of the economics profession). But the policy maker’s approach is far from being scientifically impartial.

Today’s economics research — as it is pursued, and taught, by leading mainstream economists — rests on a scientific method that is borrowed from natural science and builds on positivism-empiricism-falsificationism.2 This approach, used in economics, does not only suffer from logical inconsistencies, its embedded skepticism and relativism has, in fact, has let economics astray.

Under the influence of positivism-empiricism-falsificationism economic theory – in particular monetary theory and financial market theory – has become the intellectual stirrup-holder of central banking, legitimizing the issuance of fiat money, the policy of manipulating the interest rate, the idea of making the financial system ‘safer’ through regulation.

In this vein, Mr Draghi praises especially the independence of central banks — for it would shield central bankers from destabilizing political outside influence. One really wonders how this argument — one-sided as it is — could find acceptance, especially in view of the fact that independent central banks have caused the great crisis in the first place.

The Central Bank's Many Friends

Why is there hardly any public opposition to Mr Draghi’s narrative? Well, a great deal of experts on monetary policy — coming mostly from government sponsored universities and research institutes — tends to be die-hard supporters of central banking. The majority of them would not find any fundamental, that is economic or ethic, flaw with it.

These so-called “monetary policy experts,” devoting so much time and energy for becoming and remaining an expert on monetary policy, unhesitatingly favor and accept without reservation the very principles on which central banking rests: the state’s coercive money production monopoly and all the measures to assert and defend it.

The upshot of such a mindset is this: “Once the apparatus is established, its future development will be shaped by what those who have chosen to serve it regard as its needs,”3 as F.A. Hayek explained the irrepressible expansionary nature of a monopolistic government agency – like a central bank.

Experts, keenly catering to the needs of the state and the banks, will make monetary policy increasingly complex and incomprehensible to the general public. Just think about the confusing abbreviations the ECB uses such as, say, APP, QE, CBPP, OMT, LTRO, TLTRO, ELA etc.4 In this way central bankers effectively sneak themselves out from public and parliamentary control.

Has the ECB Violated its Mandate?

It comes therefore as no surprise Mr Draghi hails “non-standard policy measures” such as quantitative easing through which the central bank subsidizes financially ailing governments and banks in particular. Mr Draghi, however, does not leave it at that. He also suggests that monetary policy should shake off remaining restrictions that hamper policy maker’s discretion:

[W]hen the world changes as it did ten years ago, policies, especially monetary policy, need to be adjusted. Such an adjustment, never easy, requires unprejudiced, honest assessment of the new realities with clear eyes, unencumbered by the defence of previously held paradigms that have lost any explanatory power.

These remarks come presumably because the German Constitutional Court has found indications that the ECB’s government bond purchases may violate EU law and has asked the European Court of Justice to make a ruling. The German judges say that ECB bond buys may go beyond the central bank's mandate and inhibit euro zone members' activities.

The issue is no doubt delicate: If the ECB is prohibited from buying government bonds (let alone reverse its purchases), all hell may break loose in the euro area: Many government and banks would find it increasingly difficult to roll-over their maturing debt and take on new loans at affordable interest rates. The euro project would immediately find itself in hot water.

Without a monetary policy of ultra-low interest rates and bailing out struggling borrowers by printing up new money (or promising to do so, if needed) the euro project would already have gone belly up. So far the ECB has indeed successfully concealed that the pipe dream of successfully creating and running a single fiat currency has failed.

The crucial question in this context is, however: What has changed in economics in the last ten years? Unfortunately, economists that follows the doctrine of positivism-empiricism-falsificationism feel encouraged to question, even reject, the idea that there are immutable economic laws, preferring the notion that ‘things change’ that ‘everything is possible’.

However, sound economics tells us that there are iron laws of human action. For instance, a rise in the quantity of money does not make an economy richer, it merely reduces the marginal utility of the money unit, thus reducing its purchasing power; or: suppressing the interest rate through the central bank must result in malinvestments and boom and bust.

In other words: Sound economics tells us that central bankers do not pursue the greater good. They debase the currency; slyly redistribute income and wealth; benefit some groups at the expense of others; help the state to expand, to become a deep state at the expense of individual freedom; make people run into ever greater indebtedness.

What central bankers really do is cause a "planned chaos." Unfortunately, the damages they create — such as, say, inflation, speculation, recession, mass unemployment etc. — are regularly and falsely attributed to the workings of the free market, thereby discouraging and eroding peoples’ confidence in private initiative and free enterprise.

The failure of such interventionism — of which central bank monetary policy is an example par excellence — does not deter its supporters. On the contrary: They feel emboldened to pursue their interventionist course ever more boldly and aggressively to achieve their desired objectives. Mr Draghi made a case in point when he said in July 2012:

“[W]e think the euro is irreversible” and “the ECB is ready to do whatever it takes to preserve the euro. And believe me, it will be enough.”5 Hayek’s warning in his book Fatal Conceit (1988) goes unheard: “The curious task of economics is to demonstrate to men how little they really know about what they imagine they can design."6

Mr Draghi’s speech should not convince us that monetary policy rests on sound economics, or that the ECB works for the greater good. If anything, it shows that economics has been twisted and deformed to service the needs of the state and its central bank – which increasingly erodes what little is left of the free market to keep the fiat money system going.

Holding up the fiat euro will result in a coercive redistribution of income and wealth among people, within and across national borders, to an extent historically unprecedented in times of piece. As a tool of an effectively anti-democratic policy, the single European currency will remain a source of interminable conflict, injustice, and it will be a drag on peoples’ prosperity.

Despite Our Own Inflation, the Dollar Dominance Takes Down the Yen and Euro

Even though the Fed has been inflating the US dollar with impunity, neither the yen nor the euro can challenge the...