GET NEWS AND ARTICLES IN YOUR INBOXPrint
A
A
Home | Mises Library | Management: Enemy of Enterprise 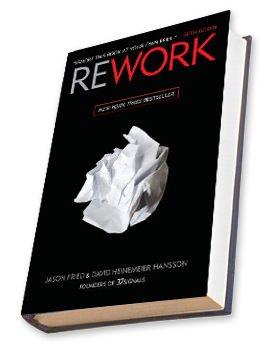 Anyone who has worked in middle management has likely, at one time or another, had their big boss pass out some dopey management books that especially touched the hamster-brained sociopath (as Scott Adams would say) who was in charge of operations. And who hasn't been subjected to the 8 stupidest management fads of all time, which required a one- or two-day seminar to hammer home the latest business gospel?

Remember TQM ("Total Quality Management")? "Potbellied managers running around with little colored belts like they're part of some Bruce Lee movie on Bizarro world," Geoffrey James describes. "You couldn't make up this stuff, it's so incredibly stupid." And I especially remember "Management by Consensus," described by James as "swimming in a pool of quicksand."

And who knew that Rudy Giuliani, Attila the Hun, George W. Bush, and Jesus had so many management and leadership secrets?

So I don't go seeking out management books. But two of the founders of 37signals, a company that is now a software firm after beginning in 1999 as a web-design company, wrote a book called Rework as a byproduct of other work they were doing. Rework, by Jason Fried and David Hansson, is a bestseller. Fried and Hansson's first book (with Matthew Linderman), Getting Real, was also a byproduct; it earned the company $1 million directly, according to the authors, and another million bucks indirectly. Henry Ford did the same when he used the excess wood scraps that were generated by car production to make charcoal — a practice that later spun off to become Kingsford Charcoal.

Fried and Hansson have written a management book for the 21st century that's cut into dozens of tiny chapters. They tell us first to ignore the real world: it's not a place at all, but an excuse. And that whole learning-from-mistakes idea? Overrated. Strategic plans? Budgets? Quit guessing: it's OK to wing it. Blindly following a plan that amounts to little more than a wild-assed guess is what's risky.

Every businessperson thinks they must grow their company. Why? Maybe a small operation is just right, say the authors. They hate the term entrepreneur, saying it's "outdated and loaded with baggage," preferring the word "starters" to describe those who start businesses. Forget the fancy suits, briefcases, and high tolerance for risk; all it takes is an idea, they say early in the book. But the key they give us at the end. Ideas last forever; it's inspiration that's perishable. Got an idea? Do it now. And do things that matter. "Make a dent in the universe."

The 37signals guys say everyone has ideas. They "are cheap and plentiful." It's what you do with them that matters. It takes capital and execution. So where do you get the capital? Use other people's money as a last resort. "Before you stick your head in that noose, look for another way." You likely don't need as much money as you think to get going.

Once you have the business going, interruptions must be avoided; they are productivity killers, as are meetings. Get some sleep, get some quick wins and remember that good enough is fine and nobody can estimate worth a darn. By the way, software developers evidently talk like truck drivers, so be forewarned that the language in Rework is occasionally spicy.

Like many ideas in the book, "Welcome Obscurity" seems counterintuitive. But the authors rightly point out that as your enterprise gets bigger and more popular, you will tend to be more and more conservative. "It's harder to take risks," they write. "That's when things start to fossilize and change becomes difficult."

And if you want to build a following and be famous, emulate the famous chefs and tell everyone what you know. Don't produce canned press releases: they're spam. And don't waste time trying to get a reporter from the New York Times or similar big-media outlet interested in your story. The NYT writers are looking for stories in trade journals and the like.

One of my favorite parts of Rework (and that's saying something), is the section on hiring. The authors urge business owners to do a particular job first and then hire someone to do it. But only hire when it hurts, pass even when you can hire great talent, and only hire when you absolutely need someone. Hire slowly, otherwise you end up with a bunch of strangers. And résumés? What a joke. Why rely on a document that has been shotgunned out to hundreds of potential employers?

Years on a previous job doesn't tell you anything. Do you think your employees must have formal educations? The 37signals honchos say, "Consider dropouts, people who had low GPAs, community-college students, and even those who just went to high school." But be especially keen to hire good writers. "That's because being a good writer is about more than writing," claim the authors. "Clear writing is a sign of clear thinking."

Firms should test-drive potential employees by giving applicants a quick project to do, and employers should recognize that the best employees are scattered throughout the world. Let them work from wherever they are, if possible. And if employees blow a little time updating their Facebook pages during work hours, what the heck? If they weren't doing that, they'd waste time doing something else.

Fried and Hansson throw a lot at you in 27,000 words. The book travels at a manic pace. But it's a fun and enlightening ride. These guys are creators and doers, not ivory-tower business consultants or academics. They started one way and were nimble enough to change focus and impressive enough to capture the attention of Amazon.com founder Jeff Bezos as a minority partner and advisor in 2006.

I doubt that managers at the too-big-to-fail banks or insurance and car companies will read and apply the 37signals wisdom. It's too scary for the sociopaths lurking amongst the cubicles. However, this is the future, whether you're building a business or just managing your own life and career.