GET NEWS AND ARTICLES IN YOUR INBOXPrint
A
A
Home | Mises Library | Man vs. the Welfare State

Man vs. the Welfare State 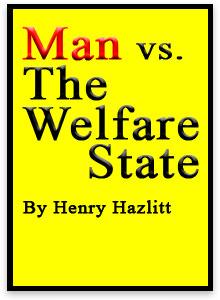 [This article is excerpted from the first two chapters of Man vs. The Welfare State, published in 1969. The entire book is available in PDF as a free download.]

In America today, most of the older generation — and many of the young — stand appalled at the nihilism of the self-styled Now Generation and its demands for unattainable reforms, or merely for the sheer destruction of whatever is established.

But the cynicism, nihilism, and revolt of "youth," and even of some of its parents, are the result of a common cause. In the last generation politicians and governments have been promising the voters that they could not only bring perpetual full employment, prosperity, and "economic growth," but solve the age-old problem of poverty overnight. And the end result is not merely that accomplishment has fallen far short of promises, but that the attempt to fulfill the promises has brought an enormous increase in government spending, an enormous increase in the burden of taxes, chronic deficits, chronic inflation, and a constant loss in the buying power of the people's earnings and savings. "Social Security" has brought an ominous increase in social insecurity.

Another result of the promise of instant utopia has been a gigantic growth of governmental power — of interference in the details of everybody's business and everybody's life. As this power has increased, it has also become concentrated in fewer and fewer hands. In America the towns and villages have steadily lost power to the States, the States to the Federal Government, and Congress to the President.

One mark of the welfare state everywhere has been the gathering of power into the hands of one man. This is no mere unfortunate coincidence; it has been inevitable. Thirty-six years ago the eminent Swedish economist Gustav Cassel explained in a prophetic lecture how "planned economy," long enough continued, must lead to despotism:

The leadership of the State in economic affairs which advocates of Planned Economy want to establish is, as we have seen, necessarily connected with a bewildering mass of government interferences of a steadily cumulative nature. The arbitrariness, the mistakes and the inevitable contradictions of such policy will, as daily experience shows, only strengthen the demand for a more rational coordination of the different measures and, therefore, for unified leadership. For this reason Planned Economy will always develop into Dictatorship.

The succeeding chapters of this book explain in detail the ideology and methods behind the present inflation and aggrandizement of State power, the conditions to which it has led and, finally, the solutions we must apply if this sinister threat — not only to the economic future of the American people but to the future of civilization itself — is to be averted.

In the early 1930s, in the depth of the Great Depression, the theory became fashionable that the cause of all depressions was Lack of Purchasing Power. The people just did not have enough money, and because of unwarranted pessimism they were refusing to spend enough even of what they had.

The solution was therefore simple: at such a time the government should boldly increase its own spending, "prime the pump," and "get things moving again."

Naive advocates of this theory assumed that more government spending was the whole answer. The more sophisticated advocates saw that the increased spending would not give people more purchasing power if the government kept the budget balanced and took it all away again in higher taxes. The thing to do was to spend more without taxing more. The trick, in other words, was deliberately to unbalance the budget — to run a deficit.

Most of the champions of deficits — including the eminent John Maynard Keynes himself, the theory's chief architect — at least publicly professed to believe that the required deficit could be financed by selling bonds directly to the public, to be paid for out of savings. But again, the more sophisticated deficiteers must have seen that a man who buys a $1,000 bond out of his savings surrenders that much purchasing power for the life of the bond. In short, he loses just as much buying power as the government gains. On net balance, no new buying power has been created.

How, then, can the government "create" new purchasing power? It can do so only if it does not increase taxes at all, but "sells" its bonds to the banking system, and if the banks "pay" for them by creating deposit credits on their books in favor of the government. This leads to an increase in "the money supply" — that is, an increase either in the amount of currency or of demand bank deposits.

If the government's new bonds are sold directly to member banks, there tends to be a dollar-for-dollar increase in the money supply compared with the amount of new bonds. But if the government's securities get into the hands of the Federal Reserve Banks, they are used to create what is called "high-powered" money. This can lead to the creation of about $6 of new money for every dollar of new government securities.

It is not easy to give a satisfactory but short explanation of the reason for this to readers without any previous knowledge of monetary theory. When member banks "buy" government bonds and "pay" for them by creating a deposit credit on their books against which the government can draw, they are adding to the nation's supply of purchasing media. They are creating money out of government promises, and some would say they are creating money out of thin air.

At least so it seems for the moment. But soon there are other consequences.

If there have been heavy unemployment and much "idle capacity," the new monetary purchasing power in the system, by increasing the demand for commodities, may indeed lead to an increase in production, and hence to an increase in employment. This has been hailed as the great Keynesian contribution to economic theory and policy. But there are fatal flaws in it.

Unless there were some serious lack of coordination among prices, costs, and wages, mass unemployment would not exist in the first place. When it does exist, the only appropriate cure is individual adjustment of prices, costs, and wages to each other — the return of coordination. But this can be brought about automatically only if the competitive forces of the market are given free play.

The reason the Keynesian medicine can work — under special conditions and for short periods — is that by increasing monetary demand and prices it may increase both sales and profit margins, and so restore production and employment. Yet this could be done even more effectively — and without the poisonous side effects and aftereffects — by restoring freedom of competition and individual coordination of prices and wages.

The Keynesians think in terms of aggregates. Their remedy is to increase the total money supply, and thereby to bring the price "level" sufficiently above the wage "level" to restore or maintain profit margins and so keep the wheels of industry spinning at full speed.

This remedy is defective in two respects. It tacitly assumes that there is a uniform discrepancy between prices and wages and a uniform percentage of "idle capacity" throughout industry. Neither is true. If "industry" is estimated to be operating at 80% of capacity, we must remember that this figure is at best an average. It may cover a situation in which, say, industry A is operating at only 60%, industry B at 63%, and so on up to industry M at 97% and industry N at 100%. If we try to expand the money supply enough to return industries A and B to full capacity, we may completely "overheat" industries M and N and produce serious productive distortions and bottlenecks.

What is more, an increase in the stock of money, contrary to Keynesian theory, will begin to force an irregular increase in prices long before "full capacity" has been reached and the "slack" taken up — if only for the reason that the "slack" is never uniform throughout industry. In a very short time, also, with the increase in prices and the increase in the demand for labor, wages will start climbing too. Then, if the previous trouble was that most wages were already too high in relation to most prices, there will again be discoordination between wages and prices; and the Keynesian prescription will call for still further doses of government spending, deficits, and new money.

Today the Federal Government is spending in a single year 269 times as much as in the fiscal year before the outbreak of World War I. The recent increase in annual spending is being attributed by government spokesmen to the cost of the war in Vietnam. Yet though in 1970 scheduled national defense expenditures are $35.6 billion greater than in 1960, total expenditures are $103.1 billion greater. This means that non-defense expenditures alone have increased $67.5 billion in the same period. It is not the war, but the determination to impose the welfare state, that has led to this incredible squandering.

A central fallacy of Keynesianism, as of all inflationary nostrums, is that they chronically confuse "income" in terms of paper money with real income in goods and services. It is possible to increase paper-money income to any amount by debasing the currency. But real income can only be increased by working harder or more efficiently, saving more, investing more, and producing more.

So let us not be too impressed by politicians who constantly cite the increase in dollar incomes, in dollar "gross national product," to show that we never had it so good. In Italy today, as a result of past inflations, it takes 624 lire to buy an American dollar. So anyone in Italy with an annual income or even total property worth more than $1,600 American dollars is already a millionaire in his own currency.