GET NEWS AND ARTICLES IN YOUR INBOXPrint
A
A
Home | Mises Library | Making Kids Worthless: Social Security's Contribution to the Fertility Crisis 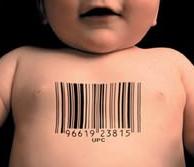 "Kinder haben die Leute immer — People will always have children," assured Konrad Adenauer, the German Chancellor, in 1957. He was convinced that the future of the brave new pay-as-you-go social security system would not be undermined by demographic changes.

Adenauer was as wrong as ever. Social security schemes around the developed world are facing a major crisis due to greater longevity, declining retirement ages and — lo and behold — below-replacement fertility rates.

What the good statesman did not realize is how the new system would affect the incentives of individuals to work, to save, and to have children. Labor force participation rates among older workers have declined dramatically since the 1960s throughout the Western world. The rules of social security benefits in most countries mean that working just does not pay off. In this way, pay-as-you-go social security schemes contribute to their own bankruptcy.1

But the disincentives to work are not the only problem with government social security schemes. Demographic change too is a result of those systems, because compulsory social security penalizes parenthood and childbearing. Unfortunately, low fertility rates do not merely hasten the insolvency of public pay-as-you-go schemes, but lack of offspring also implies the decline of centuries-old nations.

The decline of fertility in the 20th century is a dismal reality. Fertility rates were higher than 5 in both Europe and the United States just a hundred years ago, but by year 2000, they had plummeted to as low as around 1.5 in Europe and 2.0 in the United States. Many European nations experience fertility rates far below replacement levels: Spain, Italy and Greece dip as low as 1.3. Germany — where according to Adenauer people were always going to have children — reaches an equally bleak figure of 1.4.2 According to some estimates Italy will reduce its population by half in the next 50 years.

What then has social security got to do with fertility rates? Actually, a lot.

In the absence of public social security systems, families function as a type of private, informal pay-as-you-go insurance mechanism, in which parents look after their children, and children care for their parents in sickness and old age in return. This is the common pattern still found in all traditional societies — just as it was in the West a hundred years ago.

Of course, some individuals cannot have children of their own, or their children may fall ill and die. The natural solution to these risks is to pool them in the informal social insurance market. This is why the norm in traditional societies is not the nuclear family but the extended family.

In addition to man's innate affection for offspring, the main reason why people used to have large families was that it was economically sound. Sociologists and demographers call it "the old age security motive for fertility."3 In traditional societies, family values and mutual altruism are deeply held values, which are nurtured by both upbringing and material needs.

Enter public social security. Instead of caring for their own parents and close relatives, those of working age are compelled by force of law and gun to pay for the retirement of everyone else. To put it plainly, social security replaces children and the family as the main support in old age by literally socializing the traditional duties of the family. Why have children when the state will take care of you in your old age?

The effect of social security on fertility is seen clearly in empirical data. The figure below shows cross-sectional data from over 100 countries in 1997.4 In this data, all countries with large pension systems have fertility rates below the replacement level. No country with pension payments above 4 per cent of GDP has a fertility rate above 3. 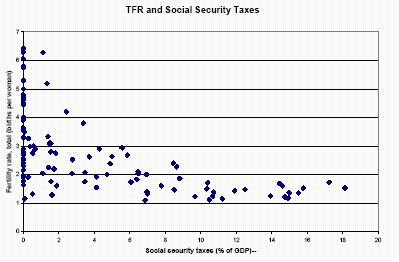 Historical data is even more revealing. The following figure depicts time-series data from eight European countries from 1960 to the present. The growth of social security payments (X-axis) is associated with the decline of fertility (Y-axis) almost one-to-one.5

Every kind of socialism creates perverse incentives, and socialism directed to the family perverts the family. Because everyone has to pay for the retirement of everyone else, it does not pay to have children. Of course, people will still continue to have some children, simply because they want to have children as ends in themselves. However, as far as economic incentives are concerned, it has become economically more "rational" to free ride on the children of others. No surprise that masses of people embrace present-oriented lifestyles and refuse to commit themselves to real marriage with children.

Those who defend governmental social security argue that a formal, nation-wide system is surely more efficient in providing for needs in old age. In reality, the opposite is true. The extended family is an effective mechanism for solving informational and monitoring problems, which is why one finds practically no free riding and moral hazard in traditional settings. Under public social security, everyone seeks to benefit at the expense of everyone else — hence the declining labor force participation rates.

Democratic decision-making processes make things even worse, because voters can free ride at the expense of future generations — arguably the main reason why social security ever was popular. In contrast to government social security programs, elderly people in extended families do not retire early, and cannot claim false disability benefits. Even when they have a minor disability, they continue to contribute in other ways such as cooking, looking after younger children, etc.

Many people nowadays find it hard to see why anyone would have children for the sake of old-age security. Surely, they think, people have children just because they like it. Still, they often hear people say they would like to have more children, but they cannot afford it. Moreover, people in less developed countries seem to afford large families, even though their real incomes barely reach subsistence levels.

What can account for these seemingly conflicting observations? The fact that in the absence of social security, the extended family is an informal social insurance mechanism that renders childbearing economically beneficial. But in countries with large social security systems, people no longer have an old-age security motive for fertility, precisely because social security has made fertility economically unwise.

Of course, social security is not the only reason for declining fertility rates. For one thing, the welfare state undermines the family in many other ways too, such as compulsory public education that seeks to replace family loyalty with allegiance to the state. Moreover, the old-age security motive for fertility should become weaker when other ways of providing for old age become available. Well-defined property rights, legal certainty and freedom of contract are some of the key institutions that foster the development of savings institutions and financial markets, which in turn offer suitable savings and insurance vehicles.

However, the emergence of alternative savings media as such cannot undermine the family in the way compulsory social security does. The reason is that people do not have children just for the sake of old-age security; they have children because they like it, and in the absence of the welfare state, having children is also economically sound. It continues to be so with the advent of formal savings institutions.

Looking at some concrete examples reveals the striking ability of social security to explain differences in fertility rates. The most obvious case is the one between developed and less developed countries: all developed countries have total fertility rates far below 3, whereas African and Middle-Eastern countries, where social security systems are practically non-existent, reach rates between 4 and 7. In contrast, past communist countries, where the family was humiliated and disgraced to the utmost, go to the very bottom: some have fertility rates as low as 1.17 (Ukraine), 1.20 (Lithuania) and 1.21 (Czech Republic).6

One can also look at differences among the developed Western countries. Among these countries, there are practically no differences in infant mortality rates, female labor force participation rates, and other standard explanations of the fertility decline. Yet total fertility rates differ widely — and exactly in the way predicted by the size of social security systems. The United States has a fertility rate of 2.09, whereas the European Union has an average of 1.47.

Also within Europe, where social security benefits are dangerously generous, there are differences among countries. Some of the most generous schemes are found in Germany, France, and the Mediterranean countries — as are the lowest fertility rates in the region. On the surface, it is surprising to find this in countries that used to be family-oriented and fervently Catholic. However, economic incentives shape behavior, and behavior shapes culture.

Old-age security is actually not a problem in a free society. The only problem is government activity that undermines natural communities and perverts economic incentives. Indeed, the very term "social security" is a misnomer: it is anti-social, and it does not provide real security. Social security benefits are nothing but political promises that can be changed — and will be changed — unilaterally by governments that find it convenient to do so.7

The presence of the state in retirement security creates calculational confusion, resource misallocation and mismanagement, and harmful free riding. The real cost of the current mess will be borne by future taxpayers, who are paying for the pensions of the present retirees but can expect to receive little in return.

The solution is not to create quasi-market solutions like individual retirement accounts managed by specialist companies, as was done in the Chilean model. That would not be good enough.8 One problem with compulsory savings schemes is that they misallocate scarce resources to uses that are not optimal for many people. They also tend to be heavily regulated by the government and hence utterly inefficient. The chief motivation for compulsory savings schemes is that they promise great wealth to those who get to sit on the cash piles.

Retirement accounts are also inconsistent with freedom, because the very concept of "retirement" is a creation of the state. Before the establishment of government social security, no one would have thought about a period of idle leisure while waiting to die. In a free society, elderly people would continue to engage themselves in various professional and non-professional activities throughout their lives.

Given current economic affluence, many people would of course leave their normal job when they grow older. But what is needed is to de-institutionalize retirement and let people decide for themselves. Let individuals and families make rational and responsible decisions that enable them to provide for their old-age needs. Maybe some will work like mad when young, and retreat into the country in their forties to live off fiction writing. Many others will choose to be housewives, looking after their children and receiving care and affection in return when they grow old.

Given the efficiency benefits of scrapping social security taxation, there would also be many more voluntary charities and mutual help societies to assist those who, through bad luck or some fault of their own, have no one else to look after them. These organizations would do a better job than any government agency will ever do, because they would be managed with entrepreneurial talent and run by people who really care.

The best solution is also the simplest: get the state out of the way.