GET NEWS AND ARTICLES IN YOUR INBOXPrint
A
A
Home | Mises Library | Ludwig von Mises, Genius? 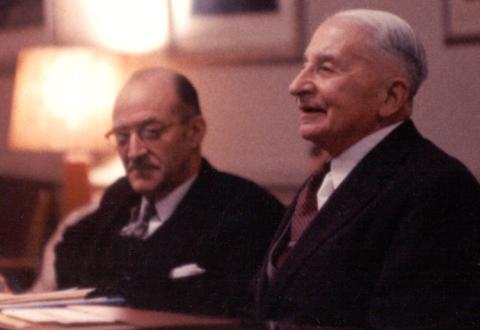 For decades, Ludwig von Mises (1881–1973) was the leading spokesman for the Austrian school of economics. An advocate of free markets and a critic of government interference, he stood for peaceful and voluntary cooperation. Whenever possible, he spoke out for individual freedom. Yet he grew up in Europe when socialism was on the rise and people wanted government to regulate “profiteering” capitalists who “exploited” workers. How did Mises, schooled in such an environment, acquire free market ideas?

Mises was born in pre-World War I Austria-Hungary and raised in Vienna. As a young man Ludwig surely had a healthy interest in fun and games, but he was also a conscientious student. At seven, he was already reading newspapers and collecting extra newspaper editions. His early interest was in history. But when he read Carl Menger’s Principles of Economics (1871) and encountered the subjective, marginal utility theory of value, he realized that economics was not history but a science of reason and logic. As Mises wrote later, reading Menger made him an economist.

With the realization that everyone’s actions were always guided by his or her subjective values, permitted Mises to explain all economic phenomena as the results of what people do in the attempt, as Mises put, to “relieve some felt uneasiness.” Prices, wages, the division of labor, barter, media of exchange, trade, interest rates, even markets themselves, evolve as countless individuals, act, adapt, and readapt as he or she thinks best given the circumstances, each hoping to attain his or her various personal goals. Thus the economic phenomena we assume as “given and on which we base our actions are the unintended consequences of countless purposive actions of individuals.

I once asked Mises what original idea he had contributed. His reply: “Everything I have written and said I learned from someone else.” True, no doubt. But the genius of Mises, like that of an inventor or entrepreneur, rests on creating something new and original by further developing something already known. By adding something to earlier theories, he made at least three major contributions. First, he developed economics as a logical science and integrated it with all other knowledge. Second, he pointed out that a socialist society, without private property owners competing with one another, would not be able to discover where, when, and how best to use property in production. And third, by reasoning from Knut Wicksell’s theory that a “natural interest rate” prevails on the market among would-be borrowers and lenders, Mises explained the trade cycle as due to interest rates forced down artificially, distorting the “natural interest rate,” disturbing the loan market and causing widespread business ups and downs.

By recognizing that all individuals, everywhere and always, act on the basis of their subjective values Mises explained not only economic phenomena but also how individuals adapt and adjust when non-market forces disturb and distort market phenomena. Thus, Mises built on subjective value theory and added to knowledge. This was Mises’s genius!

Bettina Bien Greaves was a senior scholar of the Ludwig von Mises Institute, she attended...