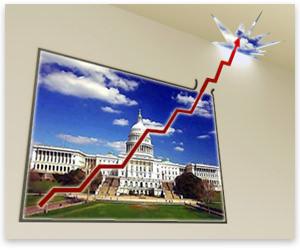 Currently, the big show in Washington, DC, centers around raising the debt ceiling. Congress began setting this ceiling in 1917 so that the Treasury could independently issue debt.

Both Democrats and Republicans tell us that not raising the debt ceiling would have a negative — even catastrophic — effect on the American and world economies. They are in agreement on this. The only matter of debate is what concessions are necessary in order to establish a bipartisan majority to pass a bill raising the ceiling. Democrats seem to want larger cuts and tax increases, while Republicans want smaller cuts with no tax increases. The multitrillion-dollar cuts that they are discussing only occur over a ten-year time frame and do not balance the budget, so no one except Ron Paul is really discussing the kinds of budget cutting that would actually help the economy.

What we really need to do is to lower the debt ceiling. If Congress passed legislation that systematically reduced the debt ceiling over time, the economy could be rebuilt on a solid foundation. Entrepreneurs in the productive sectors would realize that an ever-increasing proportion of resources (land, labor, and capital) would be at their disposal, while companies that capitalized on the federal budget would have an ever-declining share of such resources.

Congress would have to cut the pay and benefits of its employees (FDR cut them by 25 percent in the depths of the Great Depression) as well as the number of such employees. Real wage rates would decline, allowing entrepreneurs to hire more employees to produce consumer-valued goods.

Congress would have to cut back on its far-flung regulatory operations, which are in fact one of the biggest drags on the economy due to the burden and uncertainty that Obama and Congress have created in terms of healthcare, financial-market, and environmental regulations. A recent study by the Phoenix Center found that even a small reduction of 5 percent, or $2.8 billion, in the federal regulatory budget would result in about $75 billion in increased private-sector GDP each year and the addition of 1.2 million jobs annually.

Eliminating the job of even a single regulator grows the American economy by $6.2 million and creates nearly 100 private-sector jobs annually.

Under a reduced debt ceiling, the federal government would also have to sell off some of its resources. It has tens of thousands of buildings that are no longer in use and tens of thousands of buildings that are significantly underused — about 75,000 buildings in total. It also controls over 400 million acres of land, or over 20 percent of all land outside of Alaska, which is almost wholly owned by the government. There is also the Strategic Petroleum Reserve and many other assets that could be sold off to cover short-term budget shortfalls.

Of course, reducing the debt ceiling would force the government to stop borrowing so much money from credit markets. This would leave significantly more credit available for the private sector. The shortage of capital is one of the most often cited reasons for the failure of the economy to recover.

Lowering the debt ceiling would force federal-government budget cutting on a large scale, and this would free up resources (labor, land, and capital) and force a cutback in the federal government's regulatory apparatus. This would put Americans back to work producing consumer-valued goods.

Passing an increase in the debt ceiling merely perpetuates the myth that there is any ceiling or control or limit on the government's ability to waste resources in the short run and its willingness to pass the burden of this squander onto future generations.

An MP3 audio file of this article, narrated by the author, is available for download.