Looking Hard at Pictures of the Socialistic Future

Socialists have generally tried to do two things: dethrone and kill God so that The People or The State might be exalted, and repeal the laws of economics. They seized the opportunity in the 20th century, denouncing God as the "opiate of the masses" and denouncing the laws of economics as peculiar and historically unique artifacts of the particular conditions of production under capitalism. They denounced both as the inventions of flunky apologists for the bourgeoisie. In the 20th century, socialists (and statists of less extreme varieties) got a chance to implement their vision and left a pile of corpses some 260 million bodies deep.

The tragedies of 20th-century socialism are made more horrible by the fact that some people understood, predicted, and warned that brutality is essential in a world where the means of production are owned by the state. In his dystopian novel Pictures of the Socialistic Future, the German libertarian Eugene Richter predicted with uncanny (and depressing) accuracy how socialism, which promised prosperity and peace, would instead deliver poverty and warfare.

The book is even more remarkable in that it was written in 1893. The Ludwig von Mises Institute (for which I write and work occasionally) has just published a new edition, with an excellent foreword by Bryan Caplan, which can be downloaded for free. The book's reappearance is especially timely because there is a movement afoot to finish socializing healthcare in the United States, and countries like Greece are discovering that the bill for large-scale socialization eventually must be paid.

In a very short 2009 volume, political philosopher G.A. Cohen asks, Why Not Socialism? Richter offers a unique — and prophetic, given that it was written some two-and-a-half decades before the Bolshevik Revolution — answer to Cohen's question that also complements alternative explanations for socialism's failures and horrors. In his foreword, and in a recent EconTalk podcast, Caplan summarizes explanations offered by Lord Acton (power corrupts) and F.A. Hayek (political power means that bad people rise to the top). As Caplan points out, Richter's thesis is that socialism was evil from the beginning.

The history of socialism is not a history of idealists who just happened to believe in an inherently dysfunctional and irrational system or whose carefully laid and benevolent plans were mucked up by bad guys who betrayed the revolution. Here is Caplan: "While the early socialists were 'idealists,' their ideal was totalitarianism" (p. ix). It just so happened that their totalitarian ideal was also inherently dysfunctional and irrational. To the degree that their revolutions were betrayed, these were betrayals of madmen, murderers, and megalomaniacs by other madmen, murderers, and megalomaniacs.

Pictures of the Socialistic Future is presented as a diary by a supporter of the socialist revolution in Germany who eventually comes to see the horrors he has wrought. He is arrogant from the beginning, applauding expropriation, approving of the use of force to prevent emigration, assenting to the reassignment of people to new tasks, and assuring doubters that paradise is just around the corner. Society declines along a series of predictable margins as shortages develop, the remaining wealth from capitalist civilization erodes, and both the military and the police force grow ominously from chapter to chapter.

Richter also shows how private property and personal freedom are inextricably linked in his discussions of religion, the arts, the media, and dissent. I paraphrase: Can "freedom of religion" mean anything if the state owns all the buildings and no government property can be used for religious purposes? Can freedom of assembly mean anything when the government owns all the meeting places? Can freedom of speech and of the press mean anything when the government owns all of the official media outlets as well as the means of producing news and commentary? Can artistic freedom long endure when the state owns the theaters, the canvas, the paint, the pens, and the paper? Can you speak truth to power when the state chooses your job and tells you where to live? 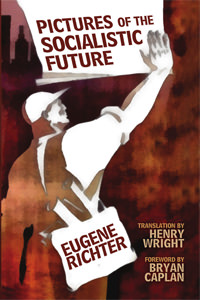 This is more than an academic discussion. The human consequences of socialism (and statism more generally) are mind-boggling, and our responsibility to our children and grandchildren is very real.

Indeed, I have told students and friends that they should read F.A. Hayek's The Road to Serfdom as if their children's lives depend on it. I would say the same about Pictures of the Socialistic Future.

As I type this, my newborn daughter and my two-year-old son are sleeping. For their sake, I can only hope we learn from the tragic lessons of the 20th century.

This review originally appeared on Forbes.com in April 2011.