The Link Between Obama and John Law 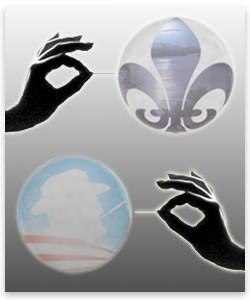 04/29/2009Doug French
Obama's 100th day is upon us and the new president is ramping up an expansion of government that will place him alongside some of the most notorious dictators in history. CNN's senior political analyst Bill Schneider may believe Obama's personal qualities make him "the superpresident," but first and foremost, Obama with his $3.5 trillion budget sees himself as the new FDR, armed with a new New Deal.

But the New Deal wasn't new when FDR did it. The charismatic Roosevelt was more than 200 years behind John Law's Mississippi Bubble, described as "the first New Deal of the capitalist order," by John T. Flynn in his amazing book Men of Wealth.

In a chapter devoted to the money magician, Flynn cleverly calls Law the "evangelist of abundance." And conditions in France could not have been riper for Law's fiscal chicanery in 1715. France was completely ruined by Louis XIV, a ruler whom history has been much too kind to, according to Flynn. He ravaged the country he ruled, while being a "shallow, egotistical, pretentious coxcomb."

Louis spent vast millions on his palaces and engaged poets and writers to write of his virtues, long before the days of CNN. As Flynn explains, industry had not come to France, thus the king stole his wealth from small farmers and city-dwelling artisans through oppressive taxation.

Those who managed to amass wealth in France did so by knowing "how to tap this stream of public money on its way to the government." There were no entrepreneurial fortunes being made, only parasitic ones.

While the typical French family lived as paupers, going barefoot and sleeping on straw, there were vast fortunes made by those granted government monopolies. Louis died in the fall of 1715 with his country hopelessly bankrupt. The treasury was empty and the army unpaid. It was proposed that the nation formally declare bankruptcy.

"France had come to the end of the road, as America did in 1933," Flynn writes, "save that she was impoverished in substance as well as in the collapse of her economic mechanisms."

But the regent did not want the public humiliation of bankruptcy, so "instead, he sought to accomplish the same end by a less frank device," and John Law's monetary theories finally had a taker.

When news reached John Law, who had been gambling his way across Europe, he quickly packed his bags and headed for Paris. Law, like Obama and FDR, was charming and eloquent. "He was handsome, tall, well-made, and full of dexterity and grace," writes Adolphe Thiers in The Mississippi Bubble: A Memoir of John Law. In addition to his physical attributes, Law "was a facile talker and a superb salesman," according to Flynn.

And just like Obama's and FDR's "deals," Law's prescription for what ailed France required no sacrifice. Instead, Law's plan called "for a pleasant journey along the glory road to riches."

Like all modern Keynesians, Law saw the economic problem as being one of not enough money. While on the lam from the law for killing Beau Wilson in a duel over Elizabeth Villiers's affections, Law spent time in Amsterdam and studied the workings of the Bank of Amsterdam. The world-famous bank had attracted debauched coinage from all over Europe since its founding in 1609. In the beginning, the bank held 100 percent reserves with the bank weighing and assaying coinage from around Europe and giving the depositor credit for an honest value in guilders.

"Just like Obama's and FDR's 'deals,' John Law's prescription for what ailed France required no sacrifice."

But what sparked the imagination of Law was the Bank of Amsterdam's violating its charter by surreptitiously making the East India Company a loan from its vast pool of deposits. As Flynn points out, the foundation of modern finance and fractionalized banking was born. "Law perceived with clarity that this bank, in its secret violation of its charter, had actually invented a method of creating money."

And create money Law did. Although he started small with his privately owned Banque Générale, within a year all royal revenues were to be paid in the Banque's notes and these notes were to be cashed on sight at government offices, making these offices essentially branches of Law's bank.

After devaluing the livre, the French government became, as described by Flynn, "drastic in the extreme." Any person making a profit from state contracts or out-of-state offices during the preceding 27 years was to make an honest accounting with rewards offered to informants. "Wealth became a crime," Flynn explains. "People of wealth were in a panic," hiding their money and attempting to flee.

Two years into Law's system, the livre was devalued again, by 40 percent. Despite the devaluations, Law's reputation continued to rise and by the end of 1718, the state took over Law's bank, which became the Banque Royale. A nomadic gambler just three years before, Law suddenly had immense power, controlling the monopoly on coining money, the collection of tax revenues, as well as tobacco and salt revenues. His Mississippi Company (Compagnie du Mississippi) would buy up the debt of the French government, a proposal Flynn compares to Roosevelt's plan to extinguish America's debt by having the Social Security Board purchase it.

Law inflated the money supply through the Banque Royale, he created jobs through public-works projects; he attempted to release the hoarded savings back into business with the promotion of Mississippi Company shares; he exploited France's colonial empire, relieved the debt-ridden government of its debts, and was making money for himself and his patrons. Law even renounced his Protestant faith and was accepted into the Catholic Church after he made generous gifts to the St. Roch parish.

Law's system unraveled a mere four years after it began. People fled Law's paper for the safety of gold and silver, despite Law's attempts to demonetize and confiscate specie. Ultimately, Law's system would only serve to forestall France's bankruptcy, not solve it. Law himself would die near poverty a decade later.

"The New Deal wasn't new when FDR did it."

"As a New Dealer [Law] was not greatly different in one respect from the apostles of the mercantilist schools — the Colberts, the Roosevelts, the Daladiers, the Hitlers and Mussolinis, and, indeed, the Pericles — who sought to create income and work by state-fostered public works and who labored to check the flow of gold away from their borders," writes Flynn who goes on to point out that Law's use of a bank to create money out of nowhere to pay for government programs was imitated by Roosevelt, Hitler, and Mussolini.

We can now throw Obama in with the other inflationist New Dealers, and with a compliant Treasury and Federal Reserve and their expanding monetary tools at the ready, he can do more damage than even John Law. We can only hope that his career will be short and that the Fed's days are numbered.