The Libyan People versus Muammar Gaddafi 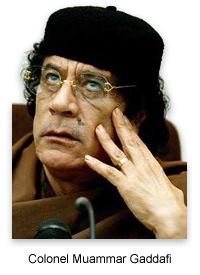 02/21/2011Llewellyn H. Rockwell Jr.
We are living in an Orwell novel, so it is not expected that anyone would remember President Ronald Reagan's war on Libya in 1986. Both Reagan and his vice president, Bush, were on television daily to decry Libya as a terror state ruled by a wicked dictator, Colonel Muammar Gaddafi. The US bombing campaign was supposedly in retaliation for the alleged Libyan involvement in an attack on a German disco the previous year

Gaddafi was certainly the Hitler of the day. In the attack, Gaddafi's 15-month-old adopted daughter, Hannah, was killed, and his two sons were wounded. Who cared? Hardly anyone, because the demonization was intense and unrelenting. T-shirts all over the country read, "F@#$ Gaddafi" and we heard all about his personal insanity and the wicked despotism he exercised over his own people.

Then, in time, and as always, the campaign died down, and eventually everyone forgot about the new Hitler and his country, just as Americans forget about any country with which they are not at war.

Decades went by. The next time we heard about Gaddafi was in 2003. President Bush joined Tony Blair to praise Libya for agreeing to dismantle a weapons program. It seemed that Gaddafi had moved from being Hitler to being a gallant friend in the war on terror. And so it has remained. The colonel was comfortably in charge and enjoyed a warm relationship with his new friends in Washington and London.

So it is something of a shock to discover that in fact Libya is ruled by a lifetime dictator who, like Mubarak and all his fellow US-backed dictators from North Africa to the Gulf states, is willing to kill and slaughter hundreds and thousands in order to maintain his rule.

The violence against antigovernment protesters has been ghastly. The Libyan military has killed hundreds of people, firing not only on peaceful demonstrators but also on people who attend funeral processions in honor of the dead. As many as 800 are wounded, and the blood is still flowing. The colonel then brought out the big guns, tearing down the modern world by blocking the Internet and all communications in and out of the country, kill-switch style. Protesters claim that there is no going back, that this man who has ruled the country since 1969 must go. And surely he must and will.

If we look back at Reagan's 1986, we can see that it set something of a precedent for the post–Cold War foreign policy of the United States. It was not a war as such. It was a bombing undertaken by the US president alone. It was using the military and international violence in service of a political priority as determined by the executive branch.

Nor was it necessarily ideological. It was conducted with the alleged intention to somehow enact justice against crimes committed and to prevent future crimes by the same state. It was the same notion that was used only a few years later against Iraq and that now forms the entire foreign-policy theory of the war on terror. Looking back, it now seems obvious that it didn't work against Libya, for the monster who was in charge then is in charge now, using terror against his own people and in support of his own iron-fisted rule.

In fact, the result is often the opposite. A US bombing or other attack on a country can rally the people behind the leader, just as it has for decades in Cuba. The same happened in Iraq during the 1990s, as US-backed sanctions ended up emboldening government and unifying the country.

The protests sweeping the Arab world show another way. The citizens of these countries are taking their fate into their own hands, just as it should be, and not waiting for others to free them. It is very possible that Libyan citizens will end up unseating the dictator whom Reagan did not unseat — and whom his successors ended up backing.

One of the great shocks that has greeted Americans this year has been to discover, perhaps for the first time, that the United States has long been running its own bloc of satellite dictatorships in many parts of the world. Just as the Soviet Union had its "captive nations," so too the United States has its own collection of valiant allies who are as wicked and oppressive toward their own peoples as the communist dictators of old.

Americans discovered this only recently due to the massive wave of protests all over the Arab world. Libya is one example. But there are also Egypt and Tunisia, plus Bahrain, Yemen, Jordon, and Morocco, Dijbouti, and other states — perhaps Saudi Arabia and the UAE too. In each case, a government in the pay and control of the United States is facing a population sick of the human-rights violations, the oppression, the economic backwardness, the injustice, and the attacks on free speech and freedom of movement.

There is a tendency in the United States to chalk the entire revolution up to a kind of anti-Americanism or to Muslim fundamentalism, though there is precious little evidence of that at all. If you listen to the speeches and hear the voices of the young, what you hear are the ideas of 1776. It is the language of universal human rights — the very American creed.

The bitter irony for most Americans is the very discovery that our own government has long presided over a collection of client states so cruel and closed that people have no choice but to pour out into the streets en masse, risking life and limb to get rid of pharaoh.

It is a fact: these people hate the tyrants. It is also a fact that these are "our" tyrants. Their very existence exposes the gross hypocrisy of US foreign policy.

God bless these protesters. They are losing their chains. They are changing the Arab world — and the whole globe — by destabilizing and overthrowing the dictators. They are not only doing it without US help. They are doing it despite US support for the dictators they oppose.

These revolutions can mean more than the overthrow of despots; they can end in overthrowing the despotic policy and empire headquartered in Washington, DC. Want to join me in the streets?