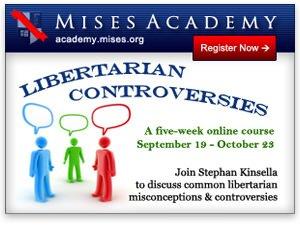 In an email exchange with Walter Block a few years ago, in response to some pessimistic comments I had made about the prospects of our libertarian movement, he wrote me,

Dear Stephan: I never feel like dropping out. Never. No matter what. To me, libertarianism is a most beautiful thing, right up there with Mozart and Bach. Illegitimi non carborundum.

Block is right. What could be more beautiful than the idea that we ought to respect each other's rights so we can live in peace and harmony? It's refreshing to be part of a community that has a passion for justice, freedom, and goodness — for truth, reason, and consistency.2 We believe society and prosperity are achievable if we simply adopt a civilized political ethic. It's a beautiful way to look at the world. Appreciating the logic of liberty and the role of property rights in the social order is enlightening, provocative, and inspiring.

Our approach also provides striking analytical advantages over conventional "left" and "right" oriented political views. Leftist and rightist political thinking alike are hypocritical, inconsistent, collectivist, and contrary to economic science and human nature. They give lip service to liberty and reason but renounce it on a dime to preserve their cherished statist policies. They end up defending policies and consequences contrary to their professed values.

By contrast, the libertarian perspective strives for consistency and justice. It recognizes the nonaggression principle and the important role of property rights in justice and the promotion of peace and prosperity. It is also informed by sound economic insights, primarily from the Austrian School. As I argued in "What Libertarianism Is," it is the only political theory that consistently advocates social rules and principles aimed at promoting peace, prosperity, and cooperation. We are neither left nor right, as Leonard Read observed;2 indeed, left and right are both simply variations of socialism and statism.

But this does not mean that we have everything figured out. Although we tower above the tired and dishonest approach of the Left and Right, and can draw on the work of modern libertarian scholars such as Rothbard, the libertarian movement is rife with controversy and disagreement. It can be enlightening and fun, but also frustrating and perplexing.

And this is not so surprising. Modern libertarianism is a young, developing, and vibrant science — thought its root can be found in classical liberalism and natural-law thought, it really did not originate until the 1950s. It is a diverse school of thought, with variants including classical liberalism, minarchism, and, in its most rigorous form, Austro-anarchist libertarianism. Libertarians of various stripes are influenced by utilitarian, pragmatic, and natural-law theories, and by thinkers including Ayn Rand, Hayek, Rothbard, Mises, and others. For decades there has been vigorous debate among different camps of libertarians about a host of controversial issues, from the foundation of rights to the nature of government, and about concrete issues such as abortion, strategy and activism, living in an unfree world, anarchy versus minarchy, punishment and restitution, and so on.

In my devotion to libertarian theory over the last 25 years, I've grappled with these and other issues many times. I've always done so from a Rothbardian and Austrian-informed propertarian and individualist perspective. For a number of issues, I've found clarity can be achieved by focusing on property rights and relying on the insights of Rothbard, Mises, Hoppe, and others. I've written on this in a number of articles and blog posts, and had countless in-depth discussions in person at libertarian gatherings and online (my publications are at my website).

My new Mises Academy course, Libertarian Controversies, will explore a variety of libertarian misconceptions, fallacies, conundrums, dilemmas, and controversies, from an Austrolibertarian perspective.

In the first part of the course, I'll discuss various common libertarian mistakes, confusions, fallacies, or flawed reasoning, and propose a solution or more consistent approach. Issues to be discussed include

Next, we'll discuss the perils of overusing metaphors in scientific discourse, and I'll provide several examples where the use of metaphors can lead to intellectual confusion and equivocation.

In addition to such common libertarian misconceptions and fallacies, libertarians regularly debate and wrestle with other, more difficult questions such as

The course will thus also focus on a number of such issues, questions, dilemmas, and controversies, and provide an overview of the arguments and perspectives of different libertarians on these issues. For most of these matters, there is not an easy solution or one that all libertarians would readily subscribe to. Here, unlike in the discussion of common misconceptions and fallacies, the purpose of discussion is not propose a "right answer" but to provide perspective and fodder for thought and further analysis.

Based on feedback from previous lectures (see, e.g., the comments I noted in my articles "Teaching an Online Mises Academy Course," "Introduction to Libertarian Legal Theory," and "Rethinking IP"), I don't think it's very controversial to expect this to be a provocative, interesting, and fun course.