GET NEWS AND ARTICLES IN YOUR INBOXPrint
A
A
Home | Mises Library | Let’s Hope Machines Take Our Jobs: We Want Wealth, Not Jobs 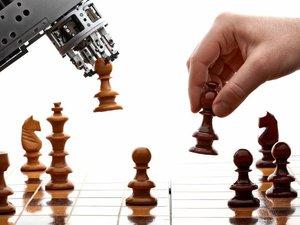 Tags The EntrepreneurValue and Exchange

The job-threatening rise of the machines is an economically illiterate meme that refuses to die. We’re actually probably in the early stages of it, a bull-market in neo-luddism, if you will. Bastiat’s “Candlemakers Petititon” answered this one long ago, but today I’ll run a little thought experiment that owes it all to good old Bastiat.

Let’s say Weird Al Yankovic invents a machine capable of making everything with a single push of a button. The first thing he does is print up a bunch of machines and sell them for a ton. Weird Al is now a billionaire, and there are thousands of make-everything machines.

This diffusion of Weird Al’s new technology replicates the market process, where new tech spreads in proportion to its usefulness. If you doubt this, because of patents, for example, check out Brazil’s experience with AIDS drugs, where they tore up the patents on humanitarian grounds.

Weird Al’s machines will, at a minimum, be mass produced in Brazil. Or China. Or Mozambique.

So, one way or another, we get a bunch of make-everything machines.

What happens to the jobs? We’re getting everything for near-free now. So all the production jobs disappear. There are still lots of jobs, of course — child-care, gardeners, musicians. But all the production jobs have vanished — something like 20 percent of jobs, maybe up to 50 percent when you include knock-on replacement of people by capital (truck drivers, robot bartenders). Heck, let’s go crazy and say 90 percent of the jobs vanished. Nobody’s got a job outside of preschool or performing on a stage. It’s the end of the world, right?

Well, the key here is that, now that everything is made with the push of a button, everything’s extremely cheap. For example, a sixteen-bedroom house or a Lamborghini costs almost nothing. Let’s say they now cost ten cents.

The main expense in such a world is probably surface space. To park all those dime-a-dozen cars. It’d take a while to “run out” of space, though — divide the world by the people and you get about twenty acres (eight hectares) for a family of four — about 100 large surburban yards. Add in the oceans — floating islands cost nothing, remember — and triple that. We end up with about 300 homes-worth of space per family.

What about those unemployed people? Well, when a house or a year’s food costs a dime, they’ll be willing to work really cheap. We’ll work for a penny a day. After all, that’s a new house or a years’ food every two weeks.

Who would hire these workers for a penny? Plenty of people. Heck, if workers cost a penny a day I’d hire several for each of my children. Just to keep the kids from getting bored. I’d hire another to cook, one to clean, one to run errands. One to keep track of my mail. One to check Facebook for me. At a penny a day I’d personally hire 100 people, easy. You would too — a buck a day’s nothing.

So the remaining 10 percent of workers who didn’t lose their jobs — babysitters, baristas, musicians — would want 100 workers each. Even at a penny, they’d take them all, and they’d be paying an outrageous rate — a tenth-house per day! That’s a daily rate of $15,000 in today’s terms.

Now, those who kept their jobs would, of course, see dropping wages. A barista who made $12 an hour in the old days would have to compete with the hordes of unemployed workers. Maybe her wage would drop to a penny, too. But, remember, a penny now buys $15,000 worth of stuff.

When the smoke clears, most people would make some extremely low wages — a penny a day. And that extremely low wage would be worth an awful lot — $15,000 a day. Implying an annual income north of several million dollars in today’s values. Some lucky few would make a dollar a day — probably the people who are good at things machines cannot do: entertainment, child-care, being a good listener, strumming the guitar at the old-folks’ home, and laughing at jokes. At a dollar a day, this super-rich elite that excels at human skills — such as making us laugh — would be billionaires in today’s values.

Either way, there would be nothing we think of even remotely as “poverty.” Sure, there’ll be inequality, but it’ll be of the sort “Sarah’s got 200 Lamborghinis and I’ve only got 40.”

The upshot is that wages plunge, but production costs plunge even more. Of course, this is based on the ridiculous Weird Al machine. Why do this? To illustrate the absolute worst-case scenario, when machines make everything for near-nothing.

What about going one step further, that the machine destroys all jobs in the whole world — it makes every single thing for us free, and it even keeps the folks entertained and the warm fuzzies flowing at the old folks’ home.

Well, we’ve already got a case study there — the sun. It gives us warmth and mangos for free. And how do we respond? We sit around and lazily enjoy it. So a machine that truly replaced all jobs would simply mean nobody works anymore — life’s somewhere between a non-stop party and a non-stop pleasant walk in the woods followed by a nice bonfire with friends and chardonnay.

We should all be so lucky that the machines do actually take every last job there is.