GET NEWS AND ARTICLES IN YOUR INBOXPrint
A
A
Home | Mises Library | Let Prices Flow: Water Needs Markets 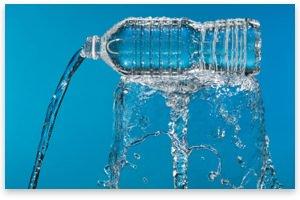 The highest market price for potable water today is reflected in an art object. The bottle contains water from springs in France and Fiji and a glacier in Iceland, with a sprinkling of 23-karat-gold dust in the water. It's Acqua di Cristallo Tributo a Modigliani, and it fetched $60,000 at auction.

For us mere mundanes, however, we can still spend a bundle on water. Buy the Evian facial mister. At $5 for a 1.7 ounce container, the Facial Mister water prices out at $376 per gallon.

Bottled water is the only water product that Americans have routinely priced and marketed. We now happily pay as much as four times the cost of gasoline for potable water that we could have for free from fountains and taps. Of course, economists will tell us factually that bottled water is not the same good. The square Fiji bottle is a sexy statement; and the ubiquitous bottle of water in hand is a fitness and convenience statement. Subjective valuation determines price. A real market in this water product does exist.

Markets for other water products are, meanwhile, mainly nonexistent. We routinely do not pay for most other forms of water. Until recently, water has been viewed and treated as a free good by all Earth's peoples. As with all free goods, water experiences unlimited demand. But water cannot meet unlimited demand. Water needs prices in order to signal scarcity and inform demand. Different categories of water need different prices to reflect the different preferences of users. Free can no longer be water's price. The profligate glory days of limitless water everywhere seem to be over.

Despite my own misinformation on this chemistry for decades, I have learned that just because oxygen and hydrogen molecules exist, they do not easily join into water molecules to solve all the world's water shortages. The reaction is not spontaneous. Joining those atoms requires explosions. And, although there is plenty of oxygen, pure-form hydrogen is quite rare.

So, if hydrogen and oxygen molecules are not simply mating up, just what has been the origin of our water? Until rather recently, the prevailing wisdom has been that Earth's water supply was primarily deposited by comets. A new theory suggests that water was already present at the birth of our planet.

But it is not known how much water there is on Earth. The 71% of the globe covered in water represents a lesser amount, perhaps by ten times, than the total figure. Besides the normal states of surface liquid, vapor, or ice, much water exists locked in rock hundreds of miles deep in Earth's mantle. Captured there through subduction, it's released by belching volcanoes.

Yet our water is all the water Earth has ever had. All life uses and reuses the same water. Some of everything is in our water because water is also the universal solvent. We can now detect pretty much any amount of anything in everything. Yes, every sweet tea can contain some of Caesar's pee.

As a nation, we've had plenty of both floods and droughts this year. In the spring of 2011, it was the Missouri River flooding for months. Then summer ushered in "Drought Spreads Pain from Florida to Arizona" as a standard headline. Not only will there be fewer crops harvested, but entire herds of cattle will have to be sold off because they simply cannot be fed. With the droughts, wildfires scourge more acreage and people resentfully ration. Some regions will face more than mere rationing. Bob Rose of the Lower Colorado River Authority, which covers an area of central Texas, said that if the drought continues through the winter, they could begin curtailing agricultural use in spring 2012 for the first time in their 77-year history.

Atlanta almost ran out of drinking water in 2008, because the city had not spent any effort over several decades on providing water to its growing population. Atlanta had also not contributed any money initially to the building of the Lake Lanier reservoir, yet demanded water from it when the city needed it. That legal water war among Georgia, Alabama, and Florida has raged for 20 years. When the city is all but dried up, Atlanta's response is to pray for rain. I don't see that that's worked

In the fall of 2007, just 150 miles northwest of Atlanta, the small town of Orme, Tennessee, did run completely out of water. Three hours of water each evening was temporarily provided to residents by expensively trucking water in. A water pipeline restored water 128 days later. Every member of the community had taken their water completely for granted.

As we can see in Orme paying for trucking water into town, oftentimes the water is free, but the delivery of the water costs dearly. In Georgia, the system one farmer used to get water from the ground ran on diesel fuel. His fuel bill for May and June 2011 was the unheard-of sum of $88,442.

California's Imperial Valley is part of the Sonoran Desert. Barely three inches of rain falls annually. Hindsight makes this location less than an obvious choice for a big agricultural county, even though there are crop advantages to irrigation in desert lands. The valley continues to expect cheap, subsidized water delivery from the Colorado River, regardless of how crazy it is to make a desert a garden, or how overallocated the dwindling water in the Colorado is.

The price for farmers there is a flat rate of $19 per acre-foot, or $19 for 325,851 gallons of water. Average American homes pay $10,592 for that volume of water delivery. But American homes are not paying market prices for the water, because the water markets do not yet exist. Even at $19 per acre-foot, $19 is not the cost of the water; it is simply the cost to deliver the water. The water is still free. California spends 20 percent of the state's electricity expenses moving or treating water.

Governments have handled water resources for the past hundred years. Freely ladling it out to their friends and favored sectors, politicians have dictated every aspect of water and water delivery, which markets should have been busy shaping in respectful response to water's growing scarcity. It is no mystery that water's quality, quantity, affordability, and availability are still mysteries in 2011. There has been no market to provide information and calculations.

And, no, command economies cannot play at market. There is no third way. Only private property and the rule of law can create a viable market; bureaucratic mandates can deliver only shortages, higher costs, and poorer quality.

Governmental overallocation of the water of Lake Mead, located in Nevada and Arizona, now threatens the lake's very existence.

Without a market of solutions, a dictator-type water czar has stepped into the evaporating strip of desert called Las Vegas. Pat Mulroy has been getting her way in many aggressive legal actions and, so far, has lost only one big one, after she had laid claim to unused water rights in four counties. She is not backing away from plans to apply for groundwater rights in northern Clark, Lincoln, and White Pine counties.

Mulroy bluntly forced citizens to use less water. Her raised water rates reduced the fixed charge but increased the cost of higher volumes. Her "cash for grass" was a gentler incentive toward xeriscaping instead of green lawns. She has created her own regional water power.

And, toward smart water use, Mulroy has separated types of water into their end uses. It may seem a small thing, but most of America simply uses its potable drinking water to do all water chores. Water a golf course? Use your drinking water. Erect an impressive fountain? Use your drinking water. Mulroy saw to it that treated wastewater, not drinking water, went to all the splashy exterior and interior Las Vegas extravagances. Ninety percent of the water used indoors in Las Vegas is now recycled. The city returns hundreds of thousands of acre-feet of treated wastewater back to Lake Mead each year.

Mulroy is not counting on rain or prayer. She is counting on engineering and the fact that she has gotten Las Vegas officials to think differently about water. But Mulroy needs markets to do all the things she singlehandedly cannot.

Markets might capture and divert floodwaters to Nevada. But that cost would be tens or hundreds of billions of dollars. Markets might create new businesses selling catchments and cisterns wherever rain does fall. Markets might result in desalination plants springing up along the coasts. (Mulroy considered one of those.) Markets might spawn a whole industry of micromonitors on water usage to pinpoint needed repair of the multitudinous leaks in distribution pipelines. Monitoring could become so respected that instead of seeing water flow through a pipeline, users begin to see dollars flowing.

An earlier version of this article was published on LewRockwell.com.