Let Cultures Play Out Their Own Problems 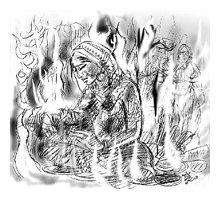 Recently, in India, a woman committed sati (voluntarily dying, by burning on her husband's funeral pyre). The villagers want to build a temple to commemorate the event. The state arrested some people. And it is trying to stop construction of the temple.

Also, two people observed santhara (voluntarily dying, by fasting) in full view and knowledge of their communities. At least two other women are presently observing it. Human rights activists are trying to stop this practice through legal means. They will indeed fail, as they have from the time they got the idea of effecting cultural change through state interference from English intellectuals (and from those Indians who got enlightenment from their association with England about two centuries back).

It is reasonably clear that these people who died through sati or santhara applied personal choice. They were old, and suffered from terminal diseases. But were they young and healthy, as is sometimes the case, would it not be all right to stop them from killing themselves?

Not unless they were forced into it.

An individual can cajole, persuade, or even beg, but he has no right to use force to stop others from killing themselves. Most importantly, institutions, particularly the state, should certainly stay out of all such affairs. The state's involvement is inherently corrupting, invariably creating worse problems than it solves. It cannot change the problems' roots. It can only sanitize the façade, brushing the real problems under the carpet. Problems will then simmer and, eventually, surface in new avatars.

Worse, by creating resistance in communities, the state only ingrains the maladies.

A bit down the memory lane…

The British built a modern road system in India, and a completely new postal and train network; they brought in the concept of industrialization. My grandfather, a businessman, was all praise for the English. He would repeatedly tell me that the English tax officer would see him off to the gate of the tax office. He would tell me that in those days you could sue the state and even expect to win, as did one of his friends whose gold-plated car was damaged because of a road pothole. In essence, the English were far more respectful to him than those who have run India since "independence."

Outside the formal Indian educational system, those who revisit India's history — at least if they are iconoclasts — figure out that the spurt to India's independence came not from a sense of liberty that the masses suddenly got, but because the English started to interfere in what they rightly saw as India's social problems. The English did not like the sati system, the caste system, child marriages, etc. They instituted the common law. They thought they were making positive changes to the society. In a way, they were, but by disturbing its natural progression they were crippling its capacity to culturally evolve itself.

I wish the English had kept themselves to contributing to trade, infrastructure and personal interactions of the kinds that my grandfather experienced.

Indians, quite rightly, did not like interference in their social affairs. Culture is an accumulation of a set of beliefs and systems. You cannot expect to make drastic changes in one belief, and not expect to create inherent contradictions and imbalances.

Sati is indeed a social problem, but it is merely a reflection of much deeper and darker maladies in Indian society. It is founded on society's failure to provide security and dignity to widows, leading women to take this rational choice. So is the case with dowry, almost a universal, and worsening, problem in India. The caste system is based on a twisted understanding of humanity, in which human beings are considered to be only human to a degree commensurate with their caste. In this hierarchy, lower-caste people fall below some animals.

Only education and ideas can change the predicament, very slowly and painfully. You can't force progress by bureaucratic edicts.

Asking for dowry (groom's insistence that certain asked "gifts" accompany bride) is illegal in India — so illegal that even legitimate gifts have to be given secretly to avoid having to bribe the police. The dowry system, in which the bride effectively bids for the man, cannot be gotten rid of unless the society learns to respect women as contributors. Dowry is indeed so commonplace that relatives freely discuss how much dowry the bride brought.

Female feticide is believed to be increasingly common in India, despite all sorts of rules against it. In the age group of 15–65, India has 107 males for 100 females — meaning that for every 100 existing women, there are about 7 women who have disappeared without a trace.

A real cultural transformation, which not only addresses the façade, but more importantly the roots can happen only through discussions, a thorough churning in the realm of ideas, something a society has got to go through to evolve.

There are no short cuts, and inherent in this understanding is a lesson for those who want to force freedom or whatever virtues on others.

[1] In the above, I am only making a case against external interference in what are clearly voluntary acts. And, I assert no moral rationalizations for abortions. I am merely saying that if abortions are legal in India, there is no rationale behind barring female feticide.