GET NEWS AND ARTICLES IN YOUR INBOXPrint
A
A
Home | Mises Library | Legalize Milk, Real Milk 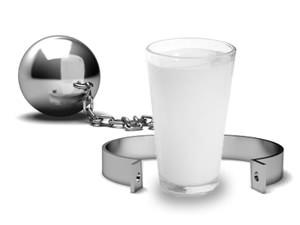 Most Americans think they drink milk on a regular basis. In fact, virtually all these people are consuming pasteurized milk, not milk. Milk in its natural state — raw milk — is consumed by very few Americans, because it is illegal in many states and thoroughly discouraged by federal health organizations, regulators, and the Big Dairy lobby.

No wonder. Raw milk is fresher, better tasting, and more nutritious. It is fresher because only refrigeration is used to prevent spoilage, and you immediately know when it is going bad because of the smell and taste. It has to be produced locally or quickly shipped and consumed.

There are some European studies that indicate — although nothing is yet definitive — that raw milk might be useful in reducing allergies, asthma, and eczema. Raw milk is also more likely to come from "pastured" cows, which only eat their natural diet: grass. Therefore, the cows are less likely to have been regularly treated with antibiotics and growth hormones.

While we are on the topic of nutrition, it should be pointed out that even though the protein component of milk is one of the best available, the most nutritious part of milk might be the fat component. Butterfat is naturally beneficial. It also contains the fat-soluble vitamins A, D, E, and K, in which many Americans are deficient. So stop buying skim and low-fat milk.

Raw milk is much better tasting, because it does not have the "dead" taste of pasteurized and ultrapasteurized milk. Some people who don't like pasteurized milk like the taste of raw milk, and many people who are lactose intolerant can tolerate raw milk. I think raw milk even smells better. If you have never consumed raw milk, get some and a few Oreo cookies to go with it, because you are in for a treat — that is, only if you don't live in North America and Australia, where raw milk is often illegal and considered dangerous.

Here, pasteurization is imposed by Big Dairy and enforced by the state. Now that the raw-milk movement has started taking off, the state is cracking down on the small dairy producers who are trying to earn a living by bringing the product to market. Law enforcement has even gone so far as destroying milk, much like the keg and still busters of the Prohibition era.

Getting raw milk is difficult. In my case, I had to join a cooperative that arranged for the milk to be shipped in from a state where raw-milk production is still legal. We all meet at a certain date and time at a location off the beaten path to receive and pay for our orders. Other dairies only sell their raw milk and raw-milk products for "nonhuman" consumption. Come on! Chocolate raw milk for nonhuman consumption?

The Food and Drug Administration claims hysterically that raw milk is unsafe to consume, and they make some statements that are clearly untrue. The Center for Disease Control also sees this as an issue that is "black and white." They say raw milk is bad for you, citing four "outbreaks" since 2000. It should be pointed out that pasteurization does not kill off all the illness-causing contaminates, and this has led to a much-larger number of such outbreaks.

With raw milk, the number of people becoming ill is over 100 per year, and 2 people are said to have died after consuming raw milk over the last decade. So there are real risks, just as with any real food, such as spinach, cantaloupe, and hamburger. At-risk populations, such as the sick and elderly, should probably stay away from raw milk. All the raw-milk dealers I know warn customers of the risks of their products, while pasteurized-milk dealers do not.

I'm sure that some of these reported cases of raw-milk illness should be attributed to the fact that raw milk is illegal. Notice that my raw milk has to be shipped halfway across the country! What happens if the refrigeration unit on the delivery truck fails and goes unnoticed for several hours during transit?

Legalizing raw milk would reduce the risks caused by prohibition. It would also further reduce risks over time by bringing competitive forces to bear on them. The increased numbers of raw-milk producers could result in new discoveries for preventing cows from being exposed to disease. As the market expands, other companies might find it profitable to sell testing equipment so that cows or their milk can be tested before going to market. Over time this could become a very large market associated with very little health risk and substantial health benefits.

The most general point is that government authorities should not be making these decisions for us. They should not prohibit something that has been going on for more than 8,000 years of human civilization. There is no public interest here that might justify government intervention at all.

There is, however, a private-interest elephant in our glass of milk — Big Dairy. Raw milk is a competitor, however small, to the big corporate and co-op companies that dominate the milk industry. Big Dairy is a powerful special-interest group that is well funded and well organized to maintain its government subsidies.

In the old days, your milk came from cows that you might even see on your way to work. The dairy farmer would have a relatively small number of cows. The farmer would either milk the cows and process the milk himself or sell it to a small co-op, which would process it and deliver to your door the same morning.

Today, dairy farming is organized on a greater scale. The cows are milked and the milk is sent much longer distances to larger processing facilities. The milk is then distributed, not to your door but to supermarkets and grocery stores. The modern approach is a "more roundabout" production process, in the words of Ludwig von Mises's teacher Eugen von Böhm-Bawerk. The process is more roundabout and much more productive and efficient. More milk is produced using fewer resources per gallon. Therefore, the modern process produces cheaper milk. However, it takes more time and therefore requires pasteurization to increase the shelf life.

Therefore, we can let the market decide the issue. You can buy expensive raw milk or inexpensive pasteurized milk. The problem is that Big Dairy does not want you to have this choice. They push legislators, regulators, health officials, and law enforcement to prevent people from having the choice.

When Big Dairy answers the question — Got Milk? — the answer is always no.