Leave Fruit Aesthetics to the Consumer 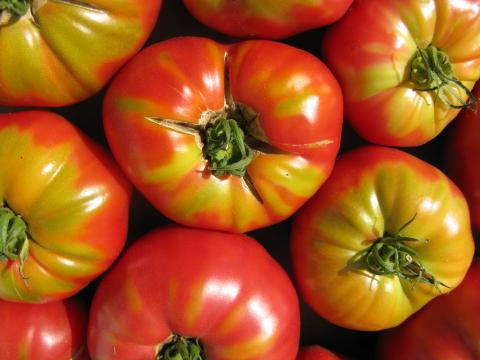 Few Americans consider themselves at significant risk from ugly or misshapen tomatoes. But the Florida Tomato Commission (FTC) "protects" those of us outside the state against any of their winter tomato growers who want to put "product of Florida” on any fruit (yes, tomatoes are fruit) not up to standard in size, shape, skin quality or color. As a result, we won't be seeing any Florida UglyRipe tomatoes this winter.

UglyRipe tomatoes are the result of a decade of experimentation with heirloom tomatoes by Joe Procacci, triggered by complaints that the tomatoes now on supermarket shelves are taste-impaired. Customers claim they bring back the luscious taste they remember from "the good old days."

Unfortunately, very few of them meet the FTC’s standard of beauty for out-of-state export, because they fail the roundness standards. (The dispute’s divisiveness is illustrated by the FTC claim that almost three-fourths of the fruit passes the standards, but Procacci claims it is only one-eighth, with over three-fifths of the crop, clearly not up to those standards, not even submitted.)

Unfortunately, this issue is just the latest in a long line of disguised consumer rip-offs in the name of consumer protec­tion, created by government enforced agricultural cartel marketing organizations. Those agricultural marketing orders trace to New Deal legislation to “save” agriculture by giving these organizations, dozens of which still survive, the power to coercively impose their standards on even unwilling members. (i.e., mandating what in other industries would trigger antitrust prosecution for being anti-consumer.)

In effect, the government has delegated them the power to criminalize selling fruit other growers deem unfit to sell or selling it in ways they don’t approve of, even when buyers, fully in­formed about any shortcomings, would be eager customers. (Procacci had to turn away out-of-state buyers and take about $3 million in losses when denied an exemption from the roundness rules in January.)

The actual purpose of the restriction on selling these “lower quality” Florida tomatoes that consumers are begging to buy is to allow other tomato growers to restrict competition from versions customers might well prefer. By limiting the alter­natives to their pretty tomatoes, other Florida tomato growers (who dominate America’s winter tomato market) raise their profits at consumer expense. That purpose of raising producer profits by harming consumers is what this restriction shares with often even more stringent ones (extending to outright bans on selling sub-standard fruit at any price) that have been imposed since the Depression on cantaloupe, peaches, pears, nectarines, strawberries, plums, and a host of other fruits.

Despite the obvious anti-consumer effect of imposing such restricted choices, the FTC echoes claims that other government-enforced agriculture marketing cartels have offered in defense. Unfortunately, those argu­ments cannot stand scrutiny any more today than they did in the past.

Cartel defenders claim the appearance or quality of produce is the essential element that sells it, so it is necessary to restrict offerings to only the finest appearing fruit. As the FTC’s Reginald Brown put it, “The reality of the marketplace is that when you go into a supermarket, you look at ‘em, you don’t bite ‘em.”  But if that is so, appearance regulations are unnecessary. If only the prettiest fruit will sell, ugly fruit would not attract customers and therefore would pose no danger to the profits of other growers.

Restricted competition beneficiaries also claim that allowing ugly or lower quality fruit to be sold would ruin the market or cripple the in­dustry. But if only fruit meeting official standards would be freely chosen by custom­ers, the market cannot be crippled by allowing other fruit to be offered for sale; if the industry would be crippled as a result, then the argument that consumers would choose only fruit up to those standards is false.

Restriction supporters argue that government must enforce some sort of minimum stan­dards to protect consumers. But consum­er protection requires no such restraints (perhaps made most transparent by the fact that Florida consumers are free to buy UglyRipes without any such protections). At most, that is an argument for informing customers about important quality dimensions, but leaving them free to make their own choices.

Even if quality grading was considered necessary, there is no need for government involvement or enforcement. Because consumers are willing to pay more for what they consider higher quality fruit (including where they deem taste more important than looks), growers will find ways to verify the various important dimensions of quali­ty. But this can be done through voluntary cooperative efforts or brand names as a guaran­tee of quality (which is the purpose for the UglyRipe name, which would be the last name one would pick if trying to get people to confuse your fruit with pretty competitors).

Florida’s existing tomato reputation (apparently for pretty but tasteless tomatoes) could easily be defended in less onerous ways, as well. For instance, they could allow labeling of Florida heirloom or Florida UglyRipe tomatoes with no risk of confusing customers about what they were getting. But refusing to pursue such an easy alternative solution to the alleged problem indicates that it is not the real reason for the restriction.

The claims by the FTC that their purpose is to help consumers rather than themselves at consumer expense is also made clear by their history of blatant attempts at protectionism against competing tomato producers in Mexico. They have brought multiple allegations of dumping, found groundless (a minor miracle, given how our dumping complaint rules are stacked on the side of American plaintiffs).

When NAFTA took away some of Florida’s protections, they attempted to impose new barriers that would fly under the public radar. In particular, they tried to impose FTC packing requirements on others (i.e., Mexico) selling winter tomatoes in the U.S. Given that U.S. tomatoes are picked green for ease of handling and then ripened with gas, while Mexican tomatoes are picked ripe (as are UglyRipes), those standards would have imposed substantial damage, and therefore a substantial barrier, on Mexican tomatoes.

The arguments for government enforced cartel restrictions on the sale of ugly fruit, wherever they fall on the gamut from outright sales bans to what can be correctly labeled as produced in Florida, are unbelievable, self-serving justifications for consumer rip-offs. They are as absurd as restricting sales of Fords for not providing Mercedes quality, hambur­ger for falling short of top sirloin, or every education not up to Ivy League stan­dards.

The arguments for restrictions on sales of ugly fruit are so "rotten" that they are logically insupportable. Our taste buds can adequately distinguish good tomatoes from bad for ourselves, allowing us to get beyond the surface. But unfortunately, that is not true about government “solutions.” There, people seldom look beyond surface arguments (particularly to see the unjustified uses of coercion entailed), and those using flimsy pretexts for self-aggrandizement can therefore effectively mislead those who don’t think very hard about them. Until we do think carefully about such assertions, such abuses will persist. And that is true in uncountable areas of government involvement, not just for a government-enforced rip-off of American tomato lovers.