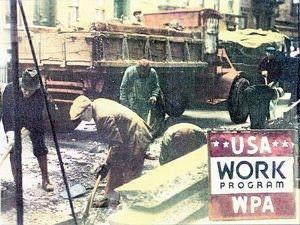 Final victory draws ever nearer for Austrian economics. Over the weekend, the New York Times, with its intellectual cachet rapidly waning and its finances in parlous straits, ran a tedious and rambling hit piece on Rand Paul. The article went out of its way to target the Mises Institute, the longtime home of mainline Austrian economics. Lew Rockwell’s response graciously accepted the honor associated with being recognized as a leading intellectual threat to establishment economics and the American welfare-warfare state by the regime’s leading media mouthpiece. Hard on the heels of the first Times article comes another attack on Austrian economics. This one appears in an op-ed by house Keynesian Paul Krugman whose one-note diatribes have long ceased to outrage or amuse. Even Krugman’s title, “Soup Kitchens Caused the Great Depression,” has been recycled. And it is not rendered any less tired by the addition of “the AFF Edition,” an idiosyncratic acronym which, as Krugman is forced to explain in the first sentence of the text, means “Austrian Founding Fathers.”

The Austrian that Krugman attacks is Ludwig von Mises, the originator of the Austrian theory of the business cycle. Actually, our jaded scribe could not be bothered to train his sites on Mises’s actual views but rather rests content to attack a caricature of Mises’s position as presented in a pseudonymous post by an individual calling himself “Lord Keynes” on the blog Social Democracy for the 21st Century: A Post Keynesian Perspective. Blithely accepting “Lord Keynes’s” claims at face value, Krugman declares “von Mises, faced with the reality of depression, basically dropped Austrian business cycle theory.” What theory did Mises substitute, then? According to Krugman, Mises adopted the view that

it was excessive wages — trade unions were demanding too much, and unemployment benefits were leaving workers insufficiently desperate. ... [I]t is, essentially, the current Republican story, in which unemployment is high because we’re being too nice to the unemployed — that, as I like to say, soup kitchens caused the Great Depression.

But why does Krugman think that the explanation of the sequence of complex historical phenomena that we have come to call the “Great Depression” must be uni-causal. Surely the Nobel-prize winning Krugman recalls from his basic micro that wage rates held above market equilibrium bring about excess supply of labor and that unemployment insurance impedes and slows down the job search process — and that these laws are not suspended during recessions or depressions initiated by other causes. And this is precisely Mises’s position. Indeed if Krugman had bestirred himself to carefully read the “fascinating post” from the obscure left-wing blog that he recycled for his New York Times op-ed, he would have found the following passages from Mises quoted by “Lord Keynes”:

The crisis from which we are now suffering is also the outcome of a credit expansion. The present crisis is the unavoidable sequel to a boom. Such a crisis necessarily follows every boom generated by the attempt to reduce the “natural rate of interest” through increasing the fiduciary media. ... The unprofitability of many branches of production and the unemployment of a sizable portion of the workers can obviously not be due to the slowdown in business alone. Both the unprofitability and the unemployment are being intensified right now by the general depression. However, in this postwar period, they have become lasting phenomena which do not disappear entirely even in the upswing. ... Thus, we see that unemployment, as a long-term mass phenomenon, is the consequence of the labor union policy of driving wage rates up. Without unemployment relief, this policy would have collapsed long ago. Thus, unemployment relief is not a means for alleviating the want caused by unemployment, as is link in the chain of causes which actually makes unemployment a long-term mass phenomenon.

In fact Mises did not deny that the Great Depression was initiated by credit expansion. Rather, he used basic economic theory to explain the subsequent protracted and unprecedented mass unemployment as a consequence of labor market failure induced by government interventions. Why is Krugman unable to grasp a multi-causal explanation of a complex and multifaceted historical episode? Could it be because Krugman himself is in thrall to the simplistic notion of aggregate demand failure as the one and only cause of all recessions/depressions present and future?

In fact, economists are finally beginning to rediscover Mises’s explanation of the prolonged mass unemployment of the 1930s. For example, UCLA economist Lee Ohanian in his recent paper, “What—or Who—Started the Great Depression,” argues that Hoover’s policies of propping up wages and encouraging work sharing “was the single most important event in precipitating the Great Depression” and resulted in “a significant labor market distortion.” He estimates that “the recession was three times worse — at a minimum — than it otherwise would have been, because of Hoover” and that the severe labor-market disequilibrium induced by Hoover’s policies accounted for 18 percent of the 27 percent decline in the nation’s GDP by the fourth quarter of 1931.

the [Great] Depression is the consequence of government programs and policies, including those of Hoover, that increased labor’s ability to raise wages above their competitive levels. The Depression would have been much less severe in the absence of Hoover’s program. Similarly, given Hoover’s program, the Depression would have been much less severe if monetary policy had responded to keep the price level from falling, which raised real wages. This analysis also provides a theory for why low nominal spending — what some economists refer to as deficient aggregate demand — generated such a large depression in the 1930s, but not in the early 1920s, which was a period of comparable deflation and monetary contraction, but when firms cut nominal wages considerably.

I conclude with a piece of advice to Krugman in regard to his unwillingness or inability to give an honest and accurate account of the Austrian theory: Perhaps you should stop trawling obscure blogs for biased material to write glosses on and make an effort to expand your study of the Austrian theory beyond the pedestrian and inaccurate description of it given in Gottfried Haberler’s dated review of business cycle theory, Prosperity and Depression.

One place to start might be the article "A Reformulation of Austrian Business Cycle Theory in Light of the Financial Crisis" in which I engage some contemporary arguments against the theory, including your own. The paper contains copious references to the mainline Austrian literature, old and new, for your further edification.