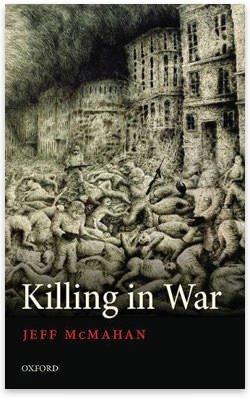 Tags Media and CultureWar and Foreign PolicyInterventionismPhilosophy and Methodology

Jeff McMahan has written a genuinely revolutionary book. He has uncovered a flaw in standard just-war theory. The standard view sharply separates the morality of going to war, jus ad bellum, from the morality of warfare, jus in bello. Whether or not a war is just does not affect the morality of how war is to be conducted. Soldiers are forbidden to violate the laws of war; but no greater restrictions are imposed on those who fight in an unjust cause than on those whose cause meets the requirements of jus ad bellum. This is exactly what McMahan rejects. Soldiers in an unjust cause have, for the most part, no right at all to engage in violent action against soldiers in a just cause. Not only do they lack moral standing to engage in aggressive warfare; they cannot legitimately even engage in defensive war, in most circumstances.

McMahan states his basic thesis in this way:

The contention of this book is that common sense beliefs about the morality of killing in war are deeply mistaken. The prevailing view is that in a state of war, the practice of killing is governed by different moral principles from those that govern acts of killing in other contexts. This presupposes that it can make a difference to the moral permissibility of killing another person whether one's political leaders have declared a state of war with that person's country. According to the prevailing view, therefore, political leaders can sometimes cause other people's moral rights to disappear simply by commanding their armies to attack them. When stated in this way, the received view seems obviously absurd. (p. vii)

Once advanced, McMahan's thesis seems obvious, and it is his considerable philosophical merit to make us realize how obvious it is. Those who fight in an unjust war are, by hypothesis, directing force against people whom they have no right to attack. If, e.g., the United States had no right to invade Iraq in 2003, then American soldiers wrongly used force against Iraqi soldiers. If so, how can one contend that they are morally permitted to do so? Further, do not defenders against such aggression have the right to resist? If they do have this right, then the aggressors may not fight back, even in self-defense. If a policeman legitimately shoots at a suspect, the suspect cannot claim the right to shoot back in self-defense. McMahan holds that matters in this respect do not change in warfare.

McMahan contends further that his view is of more than merely theoretical importance. Because people accept the incorrect view that soldiers who fight in an unjust war do no wrong, so long as they obey the laws of war, they are more likely to participate in such wars. This makes wars more likely.

[Although] the idea that no one does wrong, or acts impermissibly, merely by fighting in a war that turns out to be unjust … is intended to have a restraining effect on the conduct of war, the widespread acceptance of this idea also makes it easier … to fight in war without qualms about whether the war is unjust. (p. 3)

As mentioned, it seems obvious, once stated, that those engaged in an unjust war have no right to attack others. But is it too severe a doctrine to claim that they have no right to defend themselves, if attacked by just combatants? Quite the contrary, McMahan notes that his view applies a standard position in interpersonal morality to the ethics of war:

For many centuries there has been general agreement that, as a matter of both morality and law, "where attack is justified there can be no lawful defence." These words were written by Pierino Belli in 1563 and were echoed a little over a century later by John Locke, who claimed that "Force is to be opposed to nothing, but to unjust and unlawful force." (p. 14)

McMahan is a very careful philosopher; as soon as he states a thesis, he thinks of qualifications, objections, and rebuttals. He notes an instance where unjust combatants can permissibly use force:

The exception to the claim that just combatants are illegitimate targets in war is when they pursue their just cause by impermissible means. If, for example, just combatants attempt to achieve their just cause by using terrorist tactics — that is, by intentionally killing and attacking innocent people, as the Allies did when they bombed German and Japanese cities in World War II — they make themselves morally liable to defensive attack and become legitimate targets even for unjust combatants. (p. 16)

If McMahan contends that unjust combatants are not morally permitted, in most cases, to use force, has he not placed unreasonable demands on them? They are in many cases conscripted into the armed forces and serve against their will: in fighting, they simply obey the orders of their government. If they refuse to serve, they may face severe criminal penalties. And once enemy troops fire on them, is it not unrealistic to demand that they not fire back?

But these considerations at best give unjust combatants an excuse for their conduct: they do not serve to show that what they do is morally right. Further, not all unjust combatants are conscripts; and, as to those who are, one sometimes has a moral duty to disobey unjust commands, even if doing so leads to harsh penalties.

"I was just following orders" is not always a convincing defense. And the situation for the soldiers who wish to act in accord with moral duty is not always so bleak. McMahan calls attention to the work of S.L.A. Marshall, who claimed that during World War II, "only about 15–20% of combatants had fired their weapons at all" (p. 133). Though not everyone accepts Marshall's figures, it is not in dispute that many soldiers in battle did not fight. But of course the majority of combatants were not jailed for resistance. Soldiers, then, who wish to disobey unjust orders may be able to escape penalties.

Not so, McMahan responds.

Among democratic countries, the US stands out in two respects: it has carefully designed and robust democratic institutions and also goes to war more often than any other democratic country. What procedural guarantees are there that the wars it fights will be just? The answer is: none. The only constraint is a requirement of Congressional authorization — a requirement that can be fudged… (p. 69)1

McMahan is an appropriately severe critic of American foreign policy:

The Pentagon Papers revealed an assortment of lies told to rally support for the war in Vietnam; Reagan lied about the nature of the Contras and the sources of their funding in order to make war against Nicaragua; and members of the George W. Bush administration lied repeatedly about weapons of mass destruction in Iraq in order to justify the invasion and occupation of that country to the UN, the Congress, and the American public. (p. 152)2

Although he considers American participation in World War II justifiable, he nevertheless remarks:

It is revealing about our attitudes in general that we sometimes do take combatants who have committed war crimes to be fully excused, or even justified… Perhaps the most notorious case of this sort is that of General Paul Tibbets, who was the commander and pilot of the Enola Gay, the plane … from which the atomic bomb was dropped on the Japanese city of Hiroshima in August of 1945… This single act by Tibbets, with contributions by the other members of his small crew, had as an immediate physical effect the killing of more people, the vast majority of whom were civilians, than any other single act ever done … all plausible moral theories, including even the most radical forms of consequentialism, prohibit the killing of that many innocent people in virtually all practically possible circumstances. Tibbets's act is therefore the most egregious war crime, and the most destructive single terrorist act, ever committed, even though it was committed in the course of a just war. Yet he was congratulated for it by President Truman… (pp. 128–29)

McMahan's drastic revision of just-war theory, however cogent, appears to carry with it an unfortunate consequence. If unjust combatants use force illegitimately, are they not then subject to criminal penalties for their conduct? If we accept this consequence, the result will be large scale Nuremberg Trial proceedings: do we really want this? Further, as F.J.P. Veale long ago pointed out in Advance to Barbarism, the prospect of being tried for war crimes encourages leaders of governments to refuse to surrender.

Fortunately, McMahan's view does not have this consequence. What he is concerned to argue is that unjust combatants do not have the moral right to use force. It does not follow from this that they ought to be subject to criminal penalties for doing so. That is a prudential matter, and, as McMahan notes, strong considerations tell against resorting to criminal law. For one thing,

Unjust combatants who feared punishment at the end of the war might be more reluctant to surrender, preferring to continue to fight with a low probability of victory than to surrender with a high probability of being punished. (pp. 190–91)

Readers unaccustomed to analytic moral philosophy may find McMahan's book hard going. He does not operate from a general theory but proceeds from case to case, weaving an intricate web of subtle distinctions.3 The effort required to read the book, though, is well worth it: Killing in War is a distinguished contribution to moral theory.