Keeping the Liberties of the People Safe 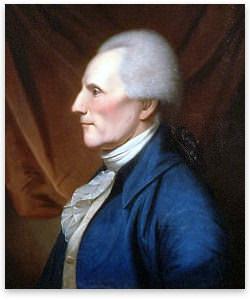 The recent explosion in the reach of federal government, with far more proposed, has made the question of limits on federal power once again the central political issue. But despite the fact that our founders, who led our move to independence and shaped our Constitution, left us an extensive and invaluable record of their views on that precise issue, modern ignorance of our history severely impoverishes current discussions.

A good example of someone very important but overlooked in the debate we are currently rehashing is Richard Henry Lee, whose birthday is January 20.

Lee is best known for the June 7, 1776, motion calling for the colonies' independence from Great Britain, which led to the Declaration of Independence. He was also, along with Patrick Henry and Samuel Adams, a leader in the Continental Congresses, including serving as president. After the Constitution's adoption, he was elected senator from Virginia, and served as one of its first presidents, pro tempore, despite his opposition to the Constitution's ratification, because it needed "bottoming the new constitution on a better bill of rights."

Particularly important is Lee's Letters from the Federal Farmer, which were not only widely published in newspapers but also sold thousands of copies as a pamphlet, providing an important impetus to the Bill of Rights. Today, when what the federal government will be allowed to do is again the primary issue, those arguments merit serious reconsideration.

I can consent to no government, which … is not calculated equally to preserve the rights of all orders of men in the community.

[A] free and enlightened people … will not resign all their rights to those who govern, and they will fix limits to their legislators and rulers … and the latter will know they cannot be passed.

[I]nquire … where and how the essential powers shall be lodged … to secure true liberty.

[W]hy in laying the foundation of the social system, need we unnecessarily leave a door open to improper regulations?

Should the general government … look for a support in a system of influence, the government will take every occasion to multiply laws … considering these as so many necessary props for its own support.

When I recollect how … people contended in the cause of liberty, and carefully weighed the importance of taxation, I can scarcely believe we are serious in proposing to vest vast powers of laying and collecting internal taxes in a government … it is not probable that any prudent congress will attempt to lay and collect internal taxes … the power would be improperly lodged in congress, and … might be abused by imprudent and designing men.

[W]e ought not to lodge [powers] as evidently to give one order of men in the community undue advantages over others; or commit the many to the mercy, prudence, and moderation of the few.

[N]ational laws ought to yield to inalienable or fundamental rights — and national laws, made by a few men, should extend only to a few national objects. This will not be the case with the laws of congress.

[M]en who govern will, in doubtful cases, construe laws and constitutions most favorably for increasing their own powers; all wise and prudent people, in forming constitutions, have drawn the line, and carefully described the powers parted with and the powers reserved … to see what rights are established as fundamental, and must not be infringed upon, in making laws in the society.

[W]e see all important powers collecting in one center, where a few men will possess them almost at discretion.

Our countrymen are entitled to an honest and faithful government; to a government of laws and not of men … if the constitution or social compact be vague and unguarded, then we depend wholly on the prudence, wisdom and moderation of those who manage the affairs of government … uncertain and precarious.

[S]ee abuse in the exercise of power more effectually guarded against.

Fortunate it is for the body of a people, if they can continue attentive to their liberties … and constitutional barriers for their permanent security.

Liberty, in its genuine sense, is security to enjoy the effects of our honest industry and labors, in a free and mild government.

The people have a right to hold and enjoy their property according to known standing laws, and which cannot be taken from them without their consent.

In free governments, the people … follow their own private pursuits, and enjoy the fruits of their labor with very small deductions for the public use.

Our true object is to give full efficacy to one principle … to render force as little necessary as possible.

[A]s long as the people are free they will preserve free governments… [W]hen they shall become tired of freedom, arbitrary government must take place.

The distinction, in itself just, that all powers not given are reserved, is in effect destroyed in this constitution … the people, by adopting the constitution, give many general undefined powers to congress, in the constitutional exercise of which the rights in question may be affected.

[T]he powers delegated to the government must be precisely defined … and clearly be of such extent as that, by no reasonable construction, they can be made to invade the rights and prerogatives intended to be left in the people.

We must consider this constitution, when adopted, as the supreme act of the people, and in construing it hereafter, we and our posterity must strictly adhere to the letter and spirit of it, and in no instance depart from them.

[A] nation, well versed in the science of government, does not conceive it to be necessary or expedient for the man entrusted with the common defense and general tranquility, to possess unlimitedly the powers in question, or even in any considerable degree.

By the proposed system, the federal head will possess, without limitation, almost every species of power that can, in its exercise, tend to change the government or to endanger liberty.

According to Forrest McDonald, Lee believed that "men are born with certain rights, whether they are honored in a particular society or not," and was therefore "imbued with an abiding love of liberty and a concomitant wholesome distrust of government." And in our current era where the founding generation's consideration of the proper, narrow limits to impose on federal power has eroded to whether the federal government is to be subject to virtually any limits, his insights are particularly important. He knew that "The first maxim of a man who loves liberty should be never to grant to rulers and atom of power that is not most clearly and indispensably necessary for the safety and well-being of society," and that "It must never be forgotten … that the liberties of the people are not so safe under the gracious manner of government as by the limitation of power." Modern Americans need to relearn those same lessons.