John Law and the Invention of Modern Finance 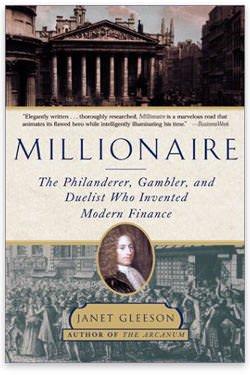 When the stock market was on a tear after hitting bottom in March, there was no talk of another stimulus plan. Now, suddenly, with stock prices melting in the summer heat, discussion of a second stimulus plan has Washington buzzing. Nobel laureate Paul Krugman believes that "[t]he bad employment report for June made it clear that the stimulus was, indeed, too small." Obama supporter and Wall Street wise man Warren Buffett says that the first stimulus "was sort of like taking a half a tablet of Viagra … It doesn't have really quite the wallop that might have been anticipated." The soon-to-be-79-year-old investor is all for a second stimulus — and presumably full doses of Viagra.

Even economists who don't favor another stimulus package are counting on the first one to finally kick in, as well as for the Federal Reserve's massive monetary stimulus to show results. After all, the federal response to the current downturn (so far) is twelve times greater than that to the Great Depression. Allen Sinai says that "lags in monetary and fiscal policy actions" should be allowed to "work through the system," and ex-Fed governor Wayne Angell claims, "monetary policy always works!"

Of course, nothing could be further from the truth. "Often after time the message in past events is more easily read," writes Janet Gleeson in Millionaire: The Philanderer, Gambler, and Duelist Who Invented Modern Finance. "Unraveling Law's story three centuries on, one cannot help but feel a sense of plus ça change plus c'est la même chose — nothing really has changed."

John Law may have died in disgrace after his Mississippi System failed in 1720, but government and its cheerleaders in the economics profession continue to embrace his ideas, believing that the printing of money can lift an economy from the doldrums. They believe enlightened central bankers know just how much money an economy requires, or just how high or low interest rates must be to ensure prosperity.

"But time's passage has seemingly brought little in the way of additional invulnerability to the giant institutions public investment has created," Gleeson points out. "In the world of banking and finance the specter of financial calamity looms as intimidatingly as ever it did to investors in Regency Paris or in Georgian London."

Just as the Treasury, the Federal Reserve, and all of Washington attempt to throw the weight of government power and largesse behind restoring our bubble economy, John Law tried every trick he knew to keep his Mississippi Company shares afloat, the French economy humming along, and the French citizens from cashing in their paper for silver and gold.

In Millionaire, Gleeson paints the most complete picture of John Law to date — and does so beautifully. The book is written for a general audience and has been culled of the complex financial details and numbers that would put off the average reader. But her bibliography is first-rate and leans on scholar Antoin Murphy for what financial details she does provide.

In Gleeson's hands, Law's story reads like an action novel with the ending of a Greek tragedy. Law is James Bond-like — a suave, debonair, womanizing gambler who always seems to come out on top. He has plenty of friends in high places and works the party circuit throughout Europe. All the while, he has a skeleton in his closet in the form of Edward Wilson, whom he killed in a duel for which details remain sketchy. (Did the two men duel over Elizabeth Villiers, "the king's boss-eyed, unattractive mistress," or a certain Mrs. Lawrence, or money Wilson had received from a homosexual lover?)

But the sturdy Scotsman was a monetary playboy. "He had not only pondered mathematical and financial conundrums," writes Gleeson, "in his idle hours he had continued to gamble and philander." In 1715 a heavily indebted France was in a depression, and the government was nearly bankrupt. Law thought the only thing France needed was more money, and if there was a shortage of gold and silver, "the answer was to establish a national bank and issue money made of paper."

Law got his chance to print France to prosperity when his friend Philippe, Duc d' Orléans, came to power. Law and Orléans were each athletic, handsome, and brilliant tennis players, according to Gleeson, and "[b]oth enjoyed extraordinary success with the opposite sex," she writes. "Orléans could outstrip even Law in his sexual conquests, although power and position were on his side."

Law's financial scheme started small with Banque Générale, but within a year Orléans helped the bank by requiring that tax collectors remit payments to the Treasury in Law's banknotes. But Law had enemies, and they tested him early on by demanding silver for five million livres in notes. Of course, Law couldn't satisfy this bank run on the spot, but he promised to pay a day later. As much as the finance minister disliked Law, because of Law's cozy relationship with Orléans, he felt that he had to bail him out and provided the silver to satisfy the redemption demand.

When Law's system ramped up, everyone succumbed to speculative fever. And Law made it easy, with the masses being able to buy shares with little money down and also to speculate in what were essentially options on Mississippi Company shares. "The wider general public had never before taken part [in buying shares], nor had such rapid rises on such a scale ever been witnessed," Gleeson explains. "Like gluttons at a Mississippi banquet, most investors ingenuously accepted the opportunity to gorge themselves and never considered the consequence."

Just as Keynesians and financial commentators bemoan the fact that people are reacting to the current downturn and stock market crash by saving instead of spending and investing, Law did all he could to keep investors from fleeing his crashing Mississippi Company shares and battered currency. Among the first to cash in was Law's friend the Irish banker Richard Cantillon. Gleeson suspects that Cantillon had inside information when he bought his shares cheap, and later benefited again from information that his brother provided: Bernard Cantillon had supervised the prospecting party that sailed to Louisiana, finding not the treasure that Law's propaganda claimed, but instead disease and hostile natives.

"Cantillon realized that the bull market was based on little more than smoke and mirrors and ever-increasing quantities of paper money," Gleeson writes. Many others ran for the cover of silver as well. Vendors were not interested in taking paper and did so only at a discount, while livestock sellers would only accept silver and gold. Price inflation was rampant, with prices rising 25 percent in just two months' time, while the prices of some food items (like bread) soared 300 to 400 percent.

Law then resorted to despotic power, banning the export of coins and bullion. Next he prohibited the purchase or wearing of diamonds and other jewels. When this didn't stop the exit from paper, Law outlawed the production and sale of all gold and silver artifacts with the exception of religious paraphernalia, resulting in soaring prices in crosses and chalices. Within a month Law banned the possession of more than 500 livres' worth of silver or gold and required that all payments of more than 100 livres be made in banknotes. People were promised generous rewards if they informed on their neighbors. "The slightest suspicion that gold was being concealed illegally would be enough for any house, whether palace or hovel, to be searched," Gleeson writes.

We can only imagine what draconian currency and financial controls will come out of the current meltdown.

In no way is Millionaire written from an Austrian point of view. Gleeson refers to the return to coinage after Law's fiasco as "draconian." She writes that Law's inflation, although rampant, was "beneficial inflation," and that it "relieved the need for high taxation," not realizing that inflation is itself a diabolically sinister form of taxation.

But these are slight quibbles with an otherwise outstanding book, which was published ten years ago to no fanfare that I can find. Books about old financial bubbles and busts just don't capture the public's imagination like high-flying stock and real estate opportunities. Those who ignore history — or learn the wrong lessons from it — are doomed to repeat it.

This review originally appeared on Liberty-Watch.com.