GET NEWS AND ARTICLES IN YOUR INBOXPrint
A
A
Home | Mises Library | J.K. Galbraith Celebrated Power, Not Freedom 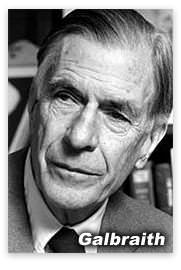 Staples used to have an advertisement in which the clueless boss comes to Dilbert's cubicle with a visitor in tow. "Dilbert, meet our new executive vice president," says the boss, adding, "He's tall, so we know he'll go far."

"I also have executive-style hair," says the new VP, and the boss interjects, "Which we think will turn silver."

Indeed, if being tall and having silver hair is what is required for being "distinguished," then the late John Kenneth Galbraith certainly fit that description. I used to refer to him as the "Dilbert economist" in reference to the Staples advertisement. However, although Galbraith was revered by other "intellectuals" and by Harvard students during his heyday in the 1960s and 1970s, in truth, he was as clueless about economics as Dilbert's boss is on the workplace.

Paul Samuelson, quoting Max Planck , wrote that "science does progress funeral by funeral," and in the case of Galbraith, one might be able to say that the present addition to progress is through subtraction. Galbraith might have been revered by other intellectuals, not to mention newspaper editorialists who have fawned over him for five decades, but, in truth, the ideas were dying long before the man.

Like many other "public intellectuals," Galbraith was a prolific writer and speaker. During the 1970s, it seemed as though he was everywhere, from being interviewed by news broadcasters to debating William F. Buckley on "Crossfire." His message was always the same: increase the role of the state in the affairs of individuals, as the state — or at least a state controlled by individuals like him — was morally and intellectually superior to a state of affairs in which the dreaded "free market" prevailed. After all, had not Galbraith himself "successfully" headed the US Office of Price Administration during World War II? If he could manage an entire "price system" by himself, was he not capable of managing the whole US economy?

Murray Rothbard noted that as an institutionalist, Galbraith believed that events trumped theory. However, to the bitter end, when it came to socialism and its demise, Galbraith refused to give up his faith in the collectivist system even as real-world events brought the socialist system down one regime after another. In fact, it was this unshakable faith in collectivism that always endeared him to intellectual elites, as he tirelessly promoted the fiction that a better world was just around the corner, provided the "right" people were in charge.

Although Galbraith proclaimed that he disdained what one might call "mainstream" economic theory, he was not averse to coming up with theories on his own, but theories based upon some of the most elementary fallacies found in economic thinking. If one takes apart his theoretical approaches that were made beginning with The Affluent Society, one finds that his criticisms of capitalism are based upon cardinal measures of utility. While economics texts are full of "cardinal utility" problems, any reputable economist (and even some with not-so-good reputations) knows that one cannot engage in (1) cardinal measures of individual utility, and (2) interpersonal utility comparisons.

According to Galbraith, economists willfully ignore the spectre of the satiation of wants. Yet they do so quite properly, because when wants — or rather, wants for exchangeable goods — are truly satiated, we shall all know it soon enough; for, at that point, everyone will cease working, will cease trying to transform land resources into final consumers' goods. There will be no need to continue producing, because all needs for consumers' goods will have been supplied — or at least all those which can be produced and exchanged. At this point, everyone will stop work, the market economy — indeed, all economy — will come to an end, means will no longer be scarce in relation to ends, and everyone will bask in paradise. I think it self-evident that this time has not yet arrived and shows no signs of arriving; if it some day should arrive, it will be greeted by economists, as by most other people, not with curses, but with rejoicing. Despite their venerable reputation as practitioners of a "dismal science," economists have no vested interests, psychological or otherwise, in scarcity.

Since the themes that Galbraith laid out in The Affluent Society were repeated in his later works, one can safely say that if one can demonstrate that the theoretical basis of that first work is nonsense, it follows that the other books also have an intellectual foundation of loose sand. Take away the measures of cardinal utility, and Galbraith has nothing systematic on which to fall except for his own wit, which intellectuals and journalists have mistaken as profound expressions of economic thought.

In Economics and the Public Purpose, Galbraith called for a "new socialism," which sounded quite like the "old socialism," in its call for high progressive taxes (the top rates at that time were 70 percent, but Galbraith wanted more), government takeovers of corporations, and central planning to be imposed upon entrepreneurs and investors.

Yet, by putting the word "new" in front of "socialism," that alone — along with Galbraith's incessant ex cathedra pronouncements, was enough to make the intellectuals swoon. In his book, The Economists, Leonard Silk — the New York Times writer who despised capitalism and free markets — introduced his chapter on Galbraith as "Socialism without Tears." In other words, if given the chance, Galbraith somehow would have introduced a kinder, gentler socialism.

However, like many other intellectuals of his day, Galbraith was a regular on the "revolutionary tourism" circuit. After visiting China in 1972, he wrote China Passage, in which he praised all of the alleged accomplishments of communism. Of course, anyone even remotely familiar with the history of communism in China knows that Mao tse Tung imposed socialism not only with tears, but with prison, torture, and murder. Perhaps this whole affair gives us a good window into the real Galbraith: as long as the communists wined, dined, and lavished praises upon him, it did not matter how many people Mao killed as long as the Chinese believed that Galbraith was a Great Thinker.

On praising communism (or, "socialism with tears"), Galbraith was without peer among intellectuals. For example, who can forget his infamous 1984 quote that the communist system in the former Soviet Union was superior to capitalism because, according to Galbraith, the communists somehow made better and more efficient use of its "manpower" than did the West? Indeed, to the very end, Galbraith was a socialist impersonating an economist.

For much of his academic life, Galbraith was considered to be a "dissident," yet few people moved in government circles more comfortably than he did. From his semi-dictatorial position with OPA during World War II to his ambassadorships during the John F. Kennedy and Lyndon B. Johnson administrations, he was revered by the movers and shakers of the state. While it is true that his institutionalism had a whiff of being "out of the mainstream," it was because of his insistence that government coercion plus government propaganda somehow could cure any social ill.

During the 1960s, Galbraith proclaimed that all of New York City's problems could be "fixed" if only the authorities there "would spend enough money." That advice led to the city's financial collapse in 1975, but even then Galbraith was insisting that everything would be fine in NYC as long as the federal government would pay for all of the city's welfare schemes. He sought to give the impression that he was a "friend of the poor," but like so many other socialists and "social justice" advocates, he loved them from a great distance, and showed disdain for any individuals that were below his financial and intellectual class.

Any discussion of Galbraith on these pages would be incomplete without including his view of the Austrians. He once wrote that F.A. Hayek was a nice enough person, but had rather "archaic" ideas on economics, and he could not stomach the free market positions that the Austrians took.

Yet, for all of the praise Galbraith is receiving from editorialists and politicians today, in truth the ideas of Mises, Hayek, and Rothbard are living long after the men have died. Human Action, while never the best-seller like The New Industrial State and the other numerous books Galbraith wrote, still influences lives today in a way that Galbraith's works never could. That is because Mises, Rothbard, and the other "dead" Austrians do not depend upon a turn of a witty phrase or an ex cathedra statement; instead, they depend upon that thing Galbraith most disdained: economic logic.