GET NEWS AND ARTICLES IN YOUR INBOXPrint
A
A
Home | Mises Library | J.B. Say Salvages the Entrepreneur 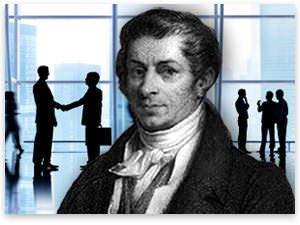 Tags EntrepreneurshipHistory of the Austrian School of Economics

[This article is excerpted from An Austrian Perspective on the History of Economic Thought (1995), volume 2, chapter 1: "J.B. Say: the French tradition in Smithian clothing."]

If Adam Smith purged economic thought of the very existence of the entrepreneur, J.B. Say, to his everlasting credit, brought him back. Not quite as far back to be sure as in the days of Cantillon and Turgot, but enough to continue fitfully and "underground" in continental economic thought even though absent from the dominant mainstream of British classicism.

Emphasis on the real world rather than on long-run equilibrium almost forced a return to the study of the entrepreneur. For Say, the entrepreneur, the linchpin of the economy, takes on himself the responsibility, the conduct, and the risk of running his firm. He almost always owns some of the firm's capital, Say being familiar with the fact that the dominant entrepreneur and risk-taker in the economy is the one who is also a capitalist, an owner of capital. The owner of capital or land or personal service hires these services out to the "renter" or entrepreneur. In return for fixed payments to these factors, the entrepreneur takes upon himself the speculative risk of gaining profit or suffering loss.

It is a sort of speculative bargain, wherein the renter takes the risk of profit and loss, according to the revenue he may realize, or the product obtained by the agency transferred, shall exceed or fall short of the rent or hire he is to pay.

The entrepreneur, Say adds, acts as a broker between sellers and buyers, applying productive factors proportionate to the demand for the products. The demand for the products, in turn, is proportionate to their utilities and to the quantity of other products exchanging for them. The entrepreneur constantly compares the selling prices of products with their costs of production; if he decides to produce more, his demand for productive factors will rise.

Part of the profits accruing to the capitalist-entrepreneur will be the standard return on capital. But apart from that, Say declared, there will be a return to the "peculiar character" of the entrepreneur. The entrepreneur is a manager of the business, but his role is also broader in Say's view: the entrepreneur must have judgment, perseverance, and "a knowledge of the world as well as of business," as he applies knowledge to the process of creating consumer goods. He must employ laborers, purchase raw material, attempt to keep costs low, and find consumers for his product. Above all, he must estimate the importance of the product, the probable demand for it, and the availability of the means of production. And, finally, he "must have a ready knack of calculation to compare the charges of production with the probable value of the product when completed and brought to market." Those who lack these qualities will be unsuccessful as entrepreneurs and suffer losses and bankruptcies; those who remain will be the skilful and successful ones earning profits.

Say was critical of Smith and the Smithians for failing to distinguish the category of entrepreneurial profit from the profit of capital, both of which are mixed together in the profits of real-world enterprises.

Say also appreciated entrepreneurship as the driving force of the allocations and adjustments of the market economy. He summed up those workings of the market by stating that the wants of consumers determine what will be produced:

The product most wanted is most in demand; and that which is most in demand yields the largest profit to industry, capital, and land, which are therefore employed in raising this particular product in preference; and, vice versa, when a product becomes less in demand, there is a less profit to be got by its production; it is, therefore, no longer produced.

Such astute analysts as Schumpeter and Hébert are critical of Say as having a view of the entrepreneur as a static manager and organizer rather than as a dynamic bearer of risk and uncertainty. We cannot share that view. It seems to us that Say is instead foursquare in the Cantillon-Turgot tradition of the entrepreneur as forecaster and risk-bearer.

From his analysis of capital, entrepreneurship, and the market, J.B. Say concluded for laissez-faire,

The producers themselves are the only competent judges of the transformation, export, and import of these various matters and commodities; and every government which interferes, every system calculated to influence production, can only do mischief.