It's a Jetson's World 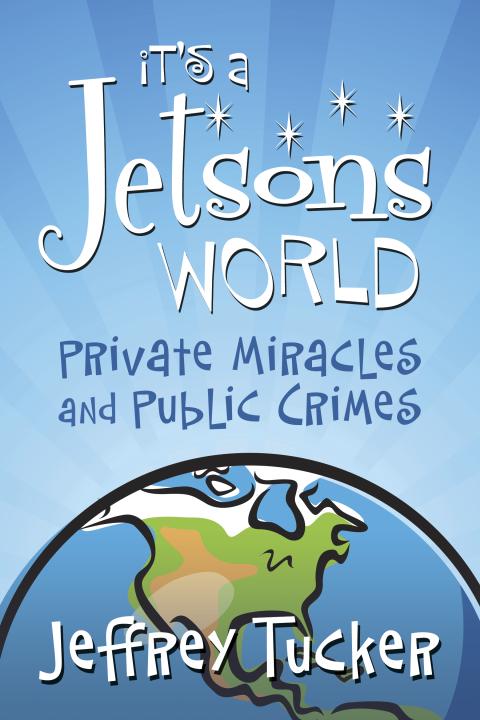 It occurred me last weekend that children should not grow up without a thorough exposure to the great cartoon from 1962, "The Jetsons." Its celebration of technology and commerce, its retro-style optimism, its hilarious dovetailing of bourgeois normalcy with gizmo-crazed futurism, its complete absence of political correctness (excluding, of course, the atrocious 1990 movie by the same name) – all combine to make this one of the great cartoon achievements of any time.

The answer was simple: obtain a set of DVDs that have the complete series, all 80 episodes made over time. What a dream! It turns out, however, that such a thing doesn't exist. Well, there's always video, but it turns out that these are very hard to find. Where to start? Amazon.com. Search. Nothing. I'm told that the Cartoon Network runs them, but I don't have cable.

But wait. Here's a private individual in the Midwest advertising on Amazon who has one to sell. One click. Moments later, the owner sends an email, telling me that he has two episodes on video, @ $3 each, no shipping charges. I Paypal him $6, and the videos arrive by UPS three days after it became clear that The Jetsons were indispensable. I thank him, he thanks me, and everyone is happy.

What a world we live in, where such transactions can take place with such ease! No slogging through downtown and looking through racks of videos. No checks or cash or even credit cards. And it's all private, just a slight peak into the magical wonderful world of the market economy that allows me to obtain in minutes an obviously rare copy of a cartoon made thirty years ago and show it to my kids in my own private home.

The fellow who sent these videos isn't officially designated by the statistics collectors as a retailer or producer. He probably didn't go to business school or take marketing classes. He's just a guy with a good video collection; the service ethic he displays was something taught to him by the dictates of the market economy itself and its relentless insistence that the interests of the consumer come first.

Now, please don't accuse me of "worshiping at the altar of the market." Worship is something owed to transcendent beings. In heralding the magic of the marketplace, I am simply recognizing that there is nothing on this earth as wonderfully productive and service-oriented as commercial society, and its glories are never more obvious than when contrasted with the work of government. Let government brag about its ability to raze whole countries; the impossibly wonderful ability of the market to coordinate the needs and desires of billions, while exceeding the expectations of everyone, is far more inspiring.

And don't say that market is merely delivering trivial junk like The Jetsons. First, it's not trivial; it's fun. Second, by the same methods, my family obtains DVDs that teach French and Latin, rare books on ancient civilization and history, CDs featuring music from the high renaissance, and clothing that is cheaper and of higher quality than anything available locally. In addition to providing entertainment, the market is serving humanity in all of its highest aspirations.

In any case, The Jetsons videos did not disappoint. In the first episode, George is feeling a financial pinch because his son wants to go to spaceball camp and his daughter needs a new gown for the prom. Meanwhile, his wife is stepping up her usual spending habits. George begins to moonlight as a taxidriver and is nearly fired from his day job (again!) for doing so. Fortunately he wins the Venus lottery (in currency units valued at 75 cents on the dollar), but unfortunately his family then goes on a wild spending spree even before the payoff arrives.

Meanwhile, his company Spacely Sprockets is faced with a takeover attempt by some corporate raiders from Venus, which is apparently enjoying economic boom times. Mr. Spacely appeals to George to help him buy more stock to keep the company from falling into Venusian hands.

The plot thickens in every which way until the devastating news arrives that Venus's economy has collapsed and the currency has been devalued. It is now worth a tenth of a penny on the dollar. The takeover attempt is held back but George is now faced with a mountain of debt. The whole story of the inflated Venusian currency sounds like Argentina today!

In the second episode, the main competition to Spacely Sprockets, Cogswell Cogs, moves next door in an apparent attempt to spy. Mr. Spacely hands George the plans for the property and demands that George figure out a way to build a high wall. George's son Elroy notices that the Cogswell Cogs building is six inches over the property line! Mr. Spacely celebrates the news and demands that Cogswell move his building.

A beaten Cogswell goes along until he notices that George had the plans upsidedown, and that it's Spacely who is over the property line! Now Cogswell demands that Spacely move. George is fired (again) until one day, when poking around his old office space, George notices a city zoning inspector measuring the Cogswell building to find it six inches higher than regulations permit. The zoning police declare that the Cogswell building be torn down! George delivers the great news to Mr. Spacely, only to have Spacely announce the news that instead of moving his building, he had agreed to buy Cogswell's now-worthless property!

Of course both episodes feature the technologies that made The Jetsons famous: the fold-up flying cars, the space boots that walk on walls and ceilings, the floating and moving sidewalks, and every manner of robot. There are also plenty of old-tech items, like cigars, which are used as a prop to signify prosperity. The Jetsons cartoons foresaw the day when huge numbers of workers would sit at terminals with screens. Note too that while there is a massive amounts of personal freedom in the world of The Jetsons, there are also many government-caused annoyances like zoning regulations and financial bubbles.

Some of the advanced technology in The Jetsons looks old-hat by today's standards. Jane's facsimile dress selector looks like a 1970s movie projector that merely broadcasts an image. Nothing special there. And Elroy's enviro-simulator is impressive but no more so than today's video games. The mail is fast, but it is physical!

Other episodes I recall from childhood that are apparently unavailable: the contest between Astro the real dog and Lectronimo the robot dog; the episodes featuring the menacing cat burglar; the one where Jane gets fed up with public transportation and decides to take driving lessons.

And this episode as detailed on the unofficial Jetsons site sounds great:

G.I. Jetson: Private Jetson is drafted, as George is a family man he gets a full two minutes to report for duty. They're all given an aptitude test, and one not-so-bright recruit jams a square peg into a round hole, whereupon the automated grading program determines that his "original thinking shows leadership potential" and makes him a general.

Alas, I can't yet obtain it. Someday perhaps. The free market's work is never done. In honor of this great show and the family-friendly market it celebrates, listen to its exhilarating theme song.