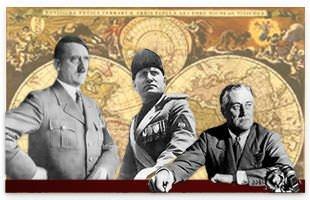 Jittery stock markets, an economy drunk on credit, and politicians calling for varieties of dictatorship: what a sense of déjà vu! Let us recall that the world went bonkers for about ten years way back when. The stock market crashed in 1929, thanks to the Federal Reserve, and with it fell the last remnants of the old liberal ideology that government should leave society and economy alone to flourish. After the federal Great Depression hit, there was a general air in the United States and Europe that freedom hadn't worked. What we needed were strong leaders to manage and plan economies and societies.

And how they were worshipped. On the other side of the world, there were Stalin and Hitler and Mussolini, but in the United States we weren't in very good shape either. Here we had FDR, who imagined himself capable of astonishing feats of price setting and economy boosting. Of course he used old-fashioned tricks: printing money and threatening people with guns. It was nothing but the ancient despotism brought back in pseudo-scientific garb.

Things didn't really return to normal until after the war. These "great men" of history keeled over eventually, but look what they left: welfare states, inflationary banking systems, high taxes, massive debt, mandates on business, and regimes with a penchant for meddling at the slightest sign of trouble. They had their way even if their absurd posturing became unfashionable later.

It's strange to go back and read opinion pieces from those times. It's as if everyone just assumed that we had to have either fascism or socialism, and that the one option to be ruled out was laissez-faire. People like Mises and Hayek had to fight tooth and nail to get a hearing. The Americans had some journalists who seemed to understand, but they were few and far between.

So what was the excuse for such a shabby period in ideological history? Why did the world go crazy? It was the Great Depression, or so says the usual explanation. People were suffering and looking for answers. They turned to a Strongman to bail them out. There was a fashion for scientific planning, and the suffering economy (caused by the government, of course) seemed to bolster the rationale.

All of which brings me to a strange observation: when it comes to politics, we aren't that much better off today. It's true that we don't have people running for office in ridiculous military suits. They don't scream at us or give sappy fireside chats or purport to be the embodiment of the social mind. The tune is slightly changed, but the notes and rhythms are the same.

Have you listened carefully to what the Democrats are proposing in the lead-up to the presidential election? It's just about as disgusting as anything heard in the 1930s: endless government programs to solve all human ills. It's as if they can't think in any other way, as if their whole worldview would collapse if they took notice of the fact that government can't do anything right.

But it also seems like they are living on another planet. The stock market has a long way to fall before it reaches anything we could call low. Mortgage interest rates are creeping along at the lowest possible rates. Unemployment is close to 4%, which is lower than even Keynesians of old could imagine in their wildest dreams.

The private sector is creating a miracle a day, even as the stuff that government attempts is failing left and right. The bureaucracies are as wasteful and useless as they've ever been, spending is already insanely high, debt is skyrocketing, and there's no way that any American believes himself to be under-taxed.

The Democrats, meanwhile, go about their merry business as if the public schools were a model for all of society. Oh, and let us not forget their brilliant idea of shutting down the industrial economy and human prosperity so the government can plan the weather 100 years from now. We can only hope that there are enough serious people left to put a stop to this harebrained idea.

But before we get carried away about the Democrats, let's say a few words about the bloodthirsty Republicans, who think of war not as something to regret, but rather the very moral life of the nation. For them, justice equals Guantánamo Bay, and public policy means a new war every month, and vast subsidies to the military-industrial complex and such other Republican-friendly firms as the big pharmaceuticals. Sure, they pay lip service to free enterprise, but it's just a slogan to them, unleashed whenever they fear that they are losing support among the bourgeois merchant class.

So there we have it. Our times are good, and yet we face a choice between two forms of central planning. They are varieties of socialism and fascism, but not overtly: they disguise their ideological convictions so that we won't recognize that they and their ilk have certain predecessors in the history of political economy.

It is impressive how crowds are hard-pressed to disagree with him. How much good is he doing? It is impossible to exaggerate it. He provides hope when we need it most. You see, the American economy may look good on the surface but underneath, the foundation is cracking. The debt is unsustainable. Savings are nearly nonexistent. Money-supply creation is getting scary. The paper-money economy can't last and won't last. One senses that the slightest change could cause unforeseen wreckage.

What would happen should the bottom fall out? Scary thought. We need ever more public spokesmen for our cause. In many ways, the Mises Institute bears a heavy burden as the world's leading institutional voice for peace and economic liberty. And we are working in every way possible to make sure that the flame of freedom is not extinguished, even in the face of legions of charlatans and powermongers. Even though the politics of our times is as dark as ever, there are bright lights on the horizon.