GET NEWS AND ARTICLES IN YOUR INBOXPrint
A
A
Home | Mises Library | Ire and Ice: A Tale of Two PIIIGS

Ire and Ice: A Tale of Two PIIIGS There were a lot of commentaries regarding the Ireland and Iceland 2008–2012 financial crises. Most of the commentaries were confined to the description of the events without addressing the essential causes of the crises. We suggest that providing a detailed description of events cannot be a substitute for economic analysis, which should be based on the essential causes behind a crisis. The essential cause is the primary driving force that gives rise to various events such as reckless bank lending (blamed by most commentators as the key cause behind the crisis) and a so-called overheated economy. Now, in terms of real GDP, both Ireland and Iceland displayed strong performance prior to the onset of the crisis in 2008. During 2000–2007, the average growth in Ireland stood at 5.9 percent versus 4.6 percent in Iceland. So what triggered the sudden collapse of these economies?

The aggressive lowering of interest rates, coupled with strong increases in the money-supply rate of growth, gave rise to various bubble activities. (The central banks' loose monetary stance set in motion the transfer of wealth from wealth-generating activities to nonproductive bubble activities.)

The sharp fall in the growth momentum of the money supply, coupled with a tighter interest-rate stance, put pressure on various bubble activities that emerged on the back of the previous loose-monetary-policy stance.

Most commentators blame the crisis on the conduct of banks that allowed the massive expansion of credit. It is held that this was responsible for the massive property boom in Ireland and overheated economic activity in Iceland.

We hold that the key factor in the economic crisis was the boom-bust policies of the central banks of Ireland and Iceland. Loose monetary policy had significantly weakened the economies' abilities in both Ireland and Iceland to generate wealth. This resulted in the weakening of various marginal activities. Consequently, a fall in these activities, followed by a decline in the pace of lending by banks — and this, in turn, coupled with a tighter stance by central banks — set in motion an economic bust. With the emergence of a recession, banks' bad assets started to pile up and this in turn posed a threat to their solvency.

From May 2007, the banks' stock prices on the Irish stock market declined markedly — they had halved by May 2008. This had an inevitable effect on banks' capital-adequacy ratios and therefore their ability to lend the ever-higher amounts that were necessary to support property prices. 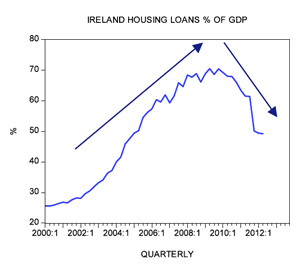 Now, in Iceland, at the end of Q2 2008, external debt was €50 billion, more than 80 percent of which was held by the banking sector — this value compares with Iceland's 2007 GDP of €8.5 billion. The liabilities of the three main banks were almost 10 times the size of the island's GDP.

With the emergence of the bust, Icelandic authorities allowed its banks to go belly up, while the Irish government decided to support the banks. According to estimates, the cost to the taxpayers of providing support to Irish banks stood at €63 billion. (The private debt of the failed banks was nationalized.) In Iceland, the government, by allowing Icelandic banks to fail, made foreign creditors, not Icelandic taxpayers, largely responsible for covering losses.

The fact that Iceland allowed the banks to go bankrupt was a positive step in healing the economy. Unfortunately Iceland introduced a program of safeguarding the welfare of the unemployed. Also, the collapse of the Icelandic krona was a hard hit to homeowners who borrowed in foreign currency. In response to this, the authorities orchestrated mortgage-relief schemes. Iceland has also imposed draconian capital controls. Obviously, all this curtailed the benefits of allowing the banks to go belly up.

Whether the Icelandic economy will show a healthy revival, as suggested by some experts, hinges on the monetary policy of Iceland's central bank. We suggest the same applies to Ireland. (What is required is to seal off all the loopholes for the growth of the money supply.)

However, it is clear that Iceland's economic situation is less bad than Ireland's, and that is largely due to the Iceland's allowing its banks to go bankrupt.

Bad Policies Are Coming Back

The rising growth momentum of money supply is a major threat to sound economic recovery in both Ireland and Iceland.

Also note that the policy interest rate in Ireland fell from 1.5 percent in October 2011 to 0.75 percent at present. In Iceland, the policy rate was lowered from 18 percent in February 2009 to 4.25 percent by July 2011. All this again sets in motion a misallocation of resources and new bubble activities — and, in turn, economic impoverishment.

Many commentators blame reckless bank lending as the key cause behind the 2008–2012 financial crises in Ireland and Iceland. Our analysis, however, suggests that it was not the banks as such that caused the crisis but rather the boom-bust policies of the central banks of Ireland and Iceland. It is these institutions that set in motion the false economic boom and the consequent economic bust. While Iceland allowed its banks to go bankrupt, the Irish government chose to bail out its banks. So, in this sense, the Icelandic authorities did the right thing, and Iceland has consequently outperformed Ireland economically. We hold that despite this positive step, Iceland's authorities have introduced various welfare schemes that have curtailed the benefits of having let banks go belly up. Furthermore, both Ireland and Iceland have resumed aggressive money pumping, thereby setting in motion the menace of boom-bust cycles.