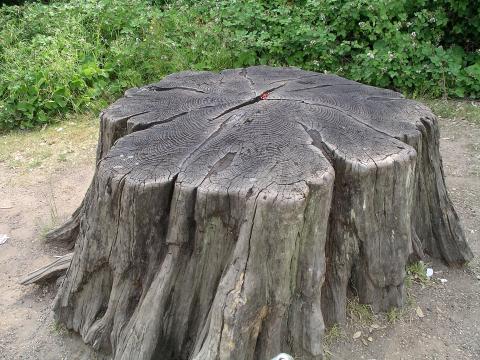 It happens to everyone who gets married, at least, it seems, everyone in my generation. You get Corningware—never enough.  You get advice—always too much. You save a piece of wedding cake and see it survives a year in your freezer—it rarely does. And you get at least one copy of that silly book about the boy and the tree.

At last count, my wife and I have received three copies of Shel Silverstein's famous fable, The Giving Tree. First published over 40 years ago, it qualifies as a classic today, with an Amazon.com sales rank of 164 (at the time of this writing). In an unscientific study, I asked some of my married friends if they owned the book. Out of five couples, all did, and three were given more than one copy over the course of their marriages.

Obviously, this book conveys a deep message to many. Reading the book recently with my daughter—it was her first reading and my umpteenth—I pondered the appeal of this queer little book and came up without any clear answers.

The Giving Tree is about a lifelong friendship between a man and an apple tree. As a young boy and then as an adolescent, the man plays with the tree, but when he grows up and moves on in life, he abandons it and only drops by to visit intermittently in the ensuing decades. After each visit, and with his leafy friend’s consent, the man amputates a piece of the tree to help him earn an income, build a house, and construct a boat.

Each time, the tree is said to be happy to have had the opportunity to see its old friend and to give to him once again, just like old times. At the end of the book, the man is old, near death, decrepit, and the tree is a stump, with nothing left to give the man but a place to sit and rest.

Given the idiotic assignation of human feelings to the tree in a story that depicts an odd man-tree friendship, it is hard to see the appeal of this book. Those drawn to it, it seems to me, tend to have a left-of-center orientation, and they like the message that it is better to spend a life giving than to spend one taking. If only the government could inculcate that value into the taxpayers!  The book assumes that, surely, only the selfish would object to such a message.

The economist in me can see through the charade in this book that the tree gives without wanting anything in return. Each exchange between man and tree is voluntary. In fact, the tree trades with the boy at each encounter, giving pieces of itself to the boy and receiving a psychic benefit in return. This is the reason most of us give to charity in the first place—an act that would be impossible without the existence of property rights institutions.

The great scholastic theologian (and proto-Austrian) Hernando de Soto wrote that "The virtues of charity, liberality, hospitality, and generosity would all become impossible in a world without private property."  Such a sentiment is absent in The Giving Tree; it is a far cry from so-called government charity (coercive wealth transfers) and government contributions (coercive taxation).

In a roundabout way, The Giving Tree brings to mind the real and immeasurable subjective value that human beings anticipate and that causes them to act. Unfortunately, something tells me that this is not what causes booksellers to restock this regrettable classic, and what’s more, I suspect that this is not what causes my liberal relatives to find deep meaning in its pages and to give away new copies at every wedding.

Halfway through my most recent reading of the book with my daughter, and knowing the ending, it hit me: this wasn’t a noble giving tree at all. This was a stupid tree. In giving to the boy-man at every opportunity, the tree thought it was doing right. Instead, it created a dependency relationship in his human friend that lasts his whole life and that leaves both impoverished. This is not a quality one would wish for a friend, and even more so, for one’s son or daughter entering into marriage.

I doubt that this is not exactly the message that Shel Silverstein had in mind. Actually, Silverstein borrowed heavily from Oscar Wilde's vastly superior The Happy Prince. In this story, a statue of a prince observes poverty for the first time, after having lived an insular life in the palace, enjoying luxury and plenty taken from others.

"I lived in the Palace of Sans-Souci," says the Prince, "where sorrow is not allowed to enter. In the daytime I played with my companions in the garden, and in the evening I led the dance in the Great Hall. Round the garden ran a very lofty wall, but I never cared to ask what lay beyond it, everything about me was so beautiful. My courtiers called me the Happy Prince, and happy indeed I was, if pleasure be happiness. So I lived, and so I died."

That's an apt description of the political leadership class. Now dead, the prince want's to give back to the people what he and his class had taken. It's a beautiful story.

It is a reflection of our times that The Giving Tree, and not the many alternatives, has become one of the acceptable moral tales of a secular society.