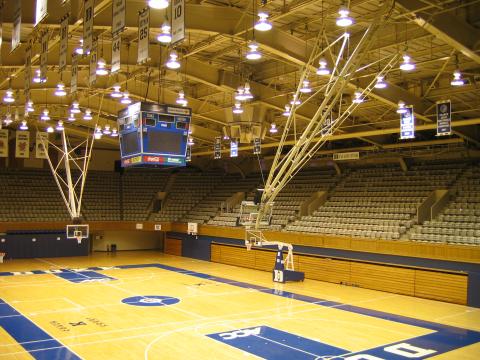 The feds have decided there's no difference between men and women. The result? There's no men's wrestling at Illinois State. None at Notre Dame. None at Princeton.

The soccer players, too, are gone from Illinois State. In a recent two year period, 24 colleges and universities did away with men's wrestling. Another 31 dropped men's golf. Men's gymnastic teams on campus, numbering 133 in 1975, are down to less than 30.

Start with a bizarre assumption and you're likely to get some crazy results. Title IX regulations, grounded in the vision that men and women, minus discrimination, would have identical interests, effectively mandate that both sexes must participate in college athletics at equal rates. Any and all imbalances in sports activities between men and women, in short, are viewed as discrimination, i.e., behavior that opens a campus to civil rights lawsuits and the denial of federal funds.

Syracuse University had a men's wrestling team since 1922. Last January, the university announced that it was pulling the plug on the team, a team that was nationally ranked, and also dumping its men's gymnastics program. At UCLA, the men's swimming team got the ax, a program that produced 22 Olympic competitors.

At Boston University, Division I football was killed, ending a 91-year run. Overall, since 1994, colleges have eliminated hundreds of male sports, shut down some 22,000 male athletes on campus, all to meet the federal government's mandate for gender proportionality.

At Princeton, a group of alums, pledging $2.3 million in private money, offered to reactivate the school's wrestling program. No thanks, said Princeton. Bringing back the program would unbalance the proportion of male to female athletes, inviting Title IX sanctions.

At Brown University, following cuts in funding in four of its athletic programs, two men's teams and two women's, a group of female athletes called in the trial lawyers. Brown was guilty of discrimination under Title IX, they argued, because its student body was 51% female and 38% of the school's athletes were female. Both the federal District and appeals courts agreed. The U.S. Supreme Court refused to hear Brown's appeal.

As generally happens with federal crusades, the solution ends up becoming worse than the original problem. We start out by agreeing to save the bald eagle and end up with a slew of federally-protected rats and bugs. We begin by agreeing to do something about black-white inequality and end up with just-off-the-boat Tongans entitled to pocket a generous slice of federal set-asides.

With college sports, what began as a perfectly good intention, i.e., increasing women's participation, turned into a bean-counting system that sends male athletes packing whenever there's not enough women who want to play. Last June, for instance, Ohio's Miami University dropped men's wrestling, soccer and tennis while roster positions on the women's teams at the school went unfilled.

Next up on the federal agenda is "gender pay parity" among coaches and the micro-management of gender ratios within each academic discipline. Ignoring the fact that pay gaps between male and female coaches are primarily the free market result of the public's interests (at Southern California, for example, men's teams brought in $18.4 million last year while women's teams pulled in $39,000), the experts in victimhood at the Equal Employment Opportunity Commission see the pay disparities as a pure case of bias against "coaches of gender."

Bill Clinton, boasting of his administration's "stepped up Title IX enforcement," says that discrimination in "access to advanced math and science programs" is the next social engineering venture on the federal agenda. At last count, the Office for Civil Rights had launched investigations of more than 30 school districts where there's "underrepresentation" in gifted programs and in advanced math and science classes.

What's next? If the feds are serious about there being no difference between men and women, what about some government action to bring a bit more gender equality to hunting and the malls? In both, of course, the lack of gender proportionality is just as great as it is in advanced physics.

With college sports, it's the government funds on campus that make schools subject to the coercive dictates of regulators. With malls and hunting, there's also the clear existence of government funds, with roads, licensing, police, sewers, etc. If the bureaucrats are right about the sexes being no different, i.e., if women aren't hard-wired to prefer shopping over hunting, why not install federal equity regulators at the mall entrances to police gender proportionality? No woman gets admitted until a man shows up.

The same with hunting. No man gets to go into the woods until a woman shows up. It's just like the gym at Princeton. No man suits up until a woman decides she wants to play ball.