The Injustice of Social Justice 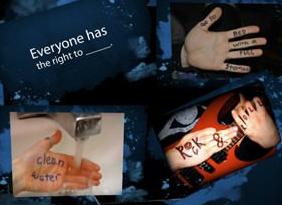 [An MP3 audio file of this article, narrated by Colin Hussey, is available for download.]

Every once in a while, something comes along that perfectly encapsulates the idea of so-called "social justice" in action. For all the wonderful critiques that have been written about this wretched concept by its many detractors,1 none quite match the elegant simplicity of a recent work by some of its advocates. I am referring here to a recent video made for the World Day of Social Justice2 in which students and teachers complete this sentence:

The video is a colorful montage of possible completions to this sentence, set to some pleasant easy-listening music. It shows students and teachers completing the above sentence, showing their answers written on their hands, arms, and feet. The people in the video give answers consisting of all manner of desirable things, from knowledge, justice, love, compassion, and truth to healthcare, education, food, clean water, nutrition, shoes, dancing, rock-and-roll, and even lollipops and ice cream.

A few of these things could be construed as genuine rights, if interpreted charitably, but most are more fanciful, such as the alleged rights to ice cream and rock-and-roll. Moreover, the weight of desirable goods of this latter kind makes the core message of the video clear: anything that is desirable is a right. You want more food? Then it's a right. Want better healthcare? Also a right. You want knowledge and compassion? Then they're rights too. Want love, dancing, prenatal care, and lollipops? Rights, rights, rights, rights.

Though succinct and simple, the video perfectly demonstrates the attitude towards rights that pervades modern political discussions, particularly among the advocates of "social justice." For such people, the notion of "rights" is a mere term of entitlement, indicative of a claim for any possible desirable good, no matter how important or trivial, abstract or tangible, recent or ancient. It is merely an assertion of desire, and a declaration of intention to use the language of rights to acquire said desire.

In fact, since the program of social justice inevitably involves claims for government provision of goods, paid for through the efforts of others, the term actually refers to an intention to use force to acquire one's desires. Not to earn desirable goods by rational thought and action, production and voluntary exchange, but to go in there and forcibly take goods from those who can supply them!

A person has a right to some particular thing — as opposed merely to a desire for that thing — if he has an actual moral prerogative allowing him to do or have that thing. This must necessarily be accompanied by others having some corresponding moral injunction against preventing the right holder from doing or having that thing. The right cannot exist in a vacuum, hermetically sealed off from others. Thus, to say that a person has property rights (a conspicuous omission from the video) is not a mere assertion of a desire for some useful thing. It is an assertion that it is morally right for a person to control his own property, and morally wrong for others to interfere with this control. Rights refer to what is actually right — i.e., what is morally right.

Genuine rights exist as eternal truths of moral philosophy. They are principles that hold true regardless of time or place and regardless of the state of present inventions. Hence, there can be no such thing as a right to shoes, ice cream, or rock-and-roll, things that were once absent entirely from human invention. To hold the contrary view is to reduce rights to a shopping list of the latest gadgets and knickknacks.

As the critics of social justice are compelled to point out ad nauseam, to assert a right to some tangible good or service like clean water, healthcare, education, prenatal care, or ice cream, requires that someone else must supply that good. It asserts the moral prerogative to have others supply you with your desires, at the expense of their effort. When coupled with an appeal to government provision (as is always the intention), it asserts the moral prerogative to use force to attain one's desires — to force others to give you their ice cream, their clean water, their medical skills, and so on. It is the principle of the thief, the rapist, the criminal, who sees his whims and desires as reason to impose himself forcibly on others.

The propaganda of "social justice" operates by cloaking desires in the language of rights, while making sure to avoid any uncomfortable mention of how these desires are to be supplied. Thus, we see on the video an asserted right to "free education." We do not see the far more honest assertion of the right to "forcibly take money from others to pay for one's own costly education." No, it is "free" education that is the asserted right. But what free education is this? Free for whom?

In a rational society, with a proper understanding of the nature of rights, an assertion of a moral prerogative for free education, healthcare, or the supply of ice cream would be regarded as an embarrassing reductio ad absurdum. Presentations where young people assert rights willy-nilly, without any apparent regard for where their desired goods would come from, might be regarded as an amusing example of the naiveté and misconceived ideals of youth. But in today's mushy-headed culture, this is actually displayed by the advocates of "social justice" as an expression of their own ideals.

Some may object to my characterization of this view of rights, by pointing out that many of the asserted rights in the video are presumably meant to be tongue-in-cheek. No one means to seriously assert the right to rock-and-roll or ice cream — they're just being silly, having some fun! Lighten up!

But here is the problem with that view: it is actually no sillier to assert the right to rock-and-roll or ice cream than to assert the right to healthcare or education. Both are instances of demands for goods or services supplied by the efforts of others — and the raising of that desire to an assertion of rights. The former are a reductio ad absurdum of the latter precisely because both claims follow from the same philosophical approach to rights — they are differences in degree, not in kind.

Now, just to be clear, let me stress that I do not intend this as a condemnation of the young people in the video. Most of the things they identify as "rights" are indeed desirable goods, and it is heartening to know that they want to live in a world with more truth, more love, more justice, more health and education, more food and clean water, more dancing, and even more ice cream. Indeed, despite their errors, this attitude bodes well for the future, and is a heartening sign of a focus on human prosperity.

The error here is in their misconception that the things they rightly desire are rights. Unfortunately, this is an entirely understandable error, given the nature of education and public debate today. Most young people, at the age of undergraduate university students, have not been exposed to serious philosophical argument about the nature of rights, and so their main acquaintance with the concept comes from the demands of rent-seeking pressure groups in the political system and the demagoguery of politicians. Their assertion of the right to ice cream is ridiculous, but it is no less philosophically defensible than thousands of other assertions of rights made in nightly news broadcasts and the pulpits of the world's legislatures.

What is remarkable here is not the errors of the young people on the video, many of whom probably have no reason to know any better about the nature of rights. What is remarkable is that the obvious reductio ad absurdum that the video demonstrates is adopted by esteemed social-justice advocacy groups and proudly advertised as an endorsement of their philosophy. It is clear, under these circumstances, that these are intellectually bankrupt movements.

Appendix — The Asserted Rights in the Video