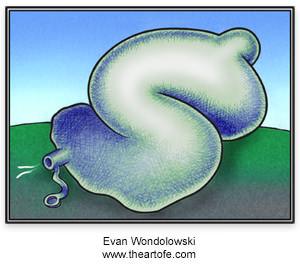 Each individual and all individuals together always enjoy fully the advantages which they can derive from indirect exchange and the use of money, no matter whether the total quantity of money is great or small. Changes in money's purchasing power generate changes in the disposition of wealth among the various members of society.

From the point of view of people eager to be enriched by such changes, the supply of money may be called insufficient or excessive, and the appetite for such gains may result in policies designed to bring about cash-induced alterations in purchasing power. However, the services which money renders can be neither improved nor impaired by changing the supply of money.

There may appear an excess or a deficiency of money in an individual's cash holding. But such a condition can be remedied by increasing or decreasing consumption or investment. (Of course, one must not fall prey to the popular confusion between the demand for money for cash holding and the appetite for more wealth.) The quantity of money available in the whole economy is always sufficient to secure for everybody all that money does and can do.

From the point of view of this insight one may call wasteful all expenditures incurred for increasing the quantity of money. The fact that things which could render some other useful services are employed as money and thus withheld from these other employments appears as a superfluous curtailment of limited opportunities for want satisfaction. It was this idea that led Adam Smith and Ricardo to the opinion that it was very beneficial to reduce the cost of producing money by resorting to the use of paper printed currency.

However, things appear in a different light to the students of monetary history. If one looks at the catastrophic consequences of the great paper-money inflations, one must admit that the expensiveness of gold production is the minor evil. It would be futile to retort that these catastrophes were brought about by the improper use which the governments made of the powers that credit money and fiat money placed in their hands and that wiser governments would have adopted sounder policies.

As money can never be neutral and stable in purchasing power, a government's plans concerning the determination of the quantity of money can never be impartial and fair to all members of society. Whatever a government does in the pursuit of aims to influence the height of purchasing power depends necessarily upon the rulers' personal value judgments. It always furthers the interests of some groups of people at the expense of other groups. It never serves what is called the commonweal or the public welfare. In the field of monetary policies too there is no such thing as a scientific ought.

The choice of the good to be employed as a medium of exchange and as money is never indifferent. It determines the course of the cash-induced changes in purchasing power. The question is only who should make the choice: the people buying and selling on the market, or the government?

It was the market that, in a selective process going on for ages, finally assigned to the precious metals gold and silver the character of money. For two hundred years the governments have interfered with the market's choice of the money medium. Even the most bigoted étatists do not venture to assert that this interference has proved beneficial.

The notions of inflation and deflation are not praxeological concepts. They were not created by economists, but by the mundane speech of the public and of politicians.

However, those applying these terms are not aware of the fact that purchasing power never remains unchanged and that consequently there is always either inflation or deflation. They ignore these necessarily perpetual fluctuations as far as they are only small and inconspicuous, and reserve the use of the terms to big changes in purchasing power.

Since the question as to at what point a change in purchasing power begins to deserve being called big depends on personal relevance judgments, it becomes manifest that inflation and deflation are terms lacking the categorical precision required for praxeological, economic, and catallactic concepts. Their application is appropriate for history and politics.

Catallactics is free to resort to them only when applying its theorems to the interpretation of events of economic history and of political programs. Moreover, it is very expedient even in rigid catallactic disquisitions to make use of these two terms whenever no misinterpretation can possibly result and pedantic heaviness of expression can be avoided. But it is necessary never to forget that all that catallactics says with regard to inflation and deflation — i.e., big cash-induced changes in purchasing power — is valid also with regard to small changes, although, of course, the consequences of smaller changes are less conspicuous than those of big changes.

The semantic revolution which is one of the characteristic features of our day has also changed the traditional connotation of the terms inflation and deflation. What many people today call inflation or deflation is no longer the great increase or decrease in the supply of money, but its inexorable consequences, the general tendency toward a rise or a fall in commodity prices and wage rates.

This innovation is by no means harmless. It plays an important role in fomenting the popular tendencies toward inflationism.

First of all there is no longer any term available to signify what inflation used to signify. It is impossible to fight a policy you cannot name. Statesmen and writers no longer have the opportunity of resorting to a terminology accepted and understood by the public when they want to question the expediency of issuing huge amounts of additional money.

They must enter into a detailed analysis and description of this policy with full particulars and minute accounts whenever they want to refer to it, and they must repeat this bothersome procedure in every sentence in which they deal with the subject. As this policy has no name, it becomes self-understood and a matter of fact. It goes on luxuriantly.

The second mischief is that those engaged in futile and hopeless attempts to fight the inevitable consequences of inflation — the rise in prices — are disguising their endeavors as a fight against inflation. While merely fighting symptoms, they pretend to fight the root causes of the evil. Because they do not comprehend the causal relation between the increase in the quantity of money on the one hand and the rise in prices on the other, they practically make things worse.

"The confusion of inflation and its consequences can directly bring about more inflation."

The best example was provided by the subsidies granted on the part of the governments of the United States, Canada, and Great Britain to farmers. Price ceilings reduce the supply of the commodities concerned because production involves a loss for the marginal producers. To prevent this outcome the governments granted subsidies to the farmers producing at the highest costs. These subsidies were financed out of additional increases in the quantity of money.

If the consumers had had to pay higher prices for the products concerned, no further inflationary effects would have emerged. The consumers would have had to use for such surplus expenditure only money which had already been issued previously. Thus the confusion of inflation and its consequences in fact can directly bring about more inflation.

It is obvious that this newfangled connotation of the terms inflation and deflation is utterly confusing and misleading and must be unconditionally rejected.

This article was excerpted from Human Action, Scholar's Edition, pp. 418–419.