The Independence of the Fed? | Mises Institute
Skip to main content

GET NEWS AND ARTICLES IN YOUR INBOXPrint
A
A
Home | Mises Library | The Independence of the Fed?

The Independence of the Fed? 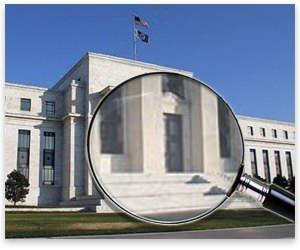 There is a thesis that the banks are in control of the Fed and as a result have gained control over the issuance of the currency of the United States. This thesis is based on the fact that the shares of the Federal Reserve Bank are held by these private banks. Does that mean that the private banks own the Fed?

The short answer is yes, but it is a hollow ownership with very restricted rights. This ownership basically exists to give credence to the claim that the fed is independent. It is appropriately described as follows in the Fed's own publication "Federal Reserve System Purposes & Functions":

The holding of this stock, however, does not carry with it the control and financial interest conveyed to holders of common stock in for-profit organizations. It is merely a legal obligation of Federal Reserve membership, and the stock may not be sold or pledged as collateral for loans. Member banks receive a 6 percent dividend annually on their stock. (p. 12)

This is exactly the manner in which Special Purpose Vehicles (or Special Purpose Entities) are created in the corporate world. There is usually a promoter who does not wish to be seen to own an entity but who wishes to derive some benefit from the existence of such an entity. Usually, overt ownership would adversely impact the presentation of the promoter's financial reporting.

The authorities and regulators, including the Fed, are very aware of these Special Purpose structures, as is the accounting profession. Rules have been devised and implemented to assess any such arrangement in order to establish its true nature. It is therefore appropriate to assess the Fed's independence — or, alternatively, interdependence — according to the very rules that it uses to assess Special Purpose Entities. First, let's draw the simple ownership structure.

Anyone with a rudimentary knowledge of accounting principles would know that ownership of an entity without control over that entity requires further investigation. Consolidation of a group of companies can become complex when ownership and control are split. The GAAP (Generally Accepted Accounting Principles) method in this case disregards ownership and focuses on control.

For example, a right to appoint the majority of the board of directors even in the absence of ownership would trigger a consolidation of that entity. Thus the controller and the entity would be seen as part of a group and collectively as a single interdependent consolidated entity. It follows that the simple structure of the Federal Reserve Banks drawn above is a split structure, where "ownership" is of limited significance and "control" must be established. Control will tell us whether the entities are independent or interdependent.

All regulation targets "control," not just the legal form of ownership. Accounting principles of consolidation have evolved from Special Purpose Vehicles, to Special Purpose Entities, and very lately — with the revision in June 2009 for implementation in January 2010 of Financial Accounting Standard 46(R) ("FIN 46(R)") — they have evolved into the concept of a "Variable Interest Entity."

In effect, the test of whether one organization is a "Variable Interest Entity" controlled by another organization is similar to a DNA test to determine whether two people are members of the same family. FIN 46 (R) defines a "variable interest" as follows:

a. The power to direct the activities of a variable interest entity that most significantly impact the entity's economic performance

The first test is to check for "the power to direct the activities." Who exactly holds that power?

The Board of Governors of the Federal Reserve System seems to have powers that could indicate "control," including the appointment of the power positions of chairman and vice chairman. However, we must also ask whether the regional boards have the independent powers normally associated with ownership and control, or if their powers are restricted and controlled in any manner.

The answer again lies in the Federal Reserve Act:

Said board of directors shall administer the affairs of said bank fairly and impartially and without discrimination in favor of or against any member bank or banks and may, subject to the provisions of law and the orders of the Board of Governors of the Federal Reserve System, extend to each member bank such discounts, advancements, and accommodations as may be safely and reasonably made with due regard for the claims and demands of other member banks, the maintenance of sound credit conditions, and the accommodation of commerce, industry, and agriculture. The Board of Governors of the Federal Reserve System may prescribe regulations further defining within the limitations of this Act the conditions under which discounts, advancements, and the accommodations may be extended to member banks. (section 4, par. 8)

It is now appropriate to update the simplified structure drawn above, in order to add these two steps of control.

The "Purposes & Functions" document describes the nature of the Board of Governors of the Federal Reserve System:

The Board of Governors of the Federal Reserve System is a federal government agency. The Board is composed of seven members, who are appointed by the President of the United States and confirmed by the U.S. Senate.

The Chairman and the Vice Chairman of the Board are also appointed by the President and confirmed by the Senate. The nominees to these posts must already be members of the Board or must be simultaneously appointed to the Board. (p. 4)

The Board of Governors of the Federal Reserve System is a federal government agency. The power to appoint its members, chairman, and vice chairman is vested in the president of the United States, with the Senate having a veto power over any appointment.

The final version of the structure of control is as follows:

The next requirement that must be met for a "variable interest" is either an "obligation to absorb losses" or a "right to receive benefits."

I would argue that the Fed's right to create currency, together with the vested interests of federal government, are more than sufficient to infer an "obligation to absorb losses." The Federal Reserve Act adds a complication to this argument by holding the shareholders responsible to the extent of their stockholding for the liabilities of the Regional Federal Reserve Banks. However, the "obligation to absorb losses" is not a requirement that needs to be met so long as the alternative, the "right to receive benefits" requirement, is met. Since the obligation is not clear cut, it is better to concentrate on the right. Note that neither the obligation nor the right need to be absolute.

The income of the Federal Reserve System is derived primarily from the interest on U.S. government securities that it has acquired through open market operations. Other major sources of income are the interest on foreign currency investments held by the System; interest on loans to depository institutions; and fees received for services provided to depository institutions, such as check clearing, funds transfers, and automated clearinghouse operations.

The statement that "about 95% of the Reserve Banks' net earnings have been paid into the Treasury since the Federal Reserve System began operations in 1914" says it well enough. It is an irrefutable fact that the federal government possesses the overwhelming "right to receive benefits."

There is, however, no denying that the banks have tremendous vested interest in influencing the policies of the Fed, nor that the power being so narrowly vested in the president makes him a special target for influence. Still, the power to control the Fed is not in the hands of its "owners" but firmly in the hands of the federal government and the president of the United States.

Sarel Oberholster is a South African living in Johannesburg, Gauteng province. He is an economist by training, a specialist financial engineer by craft, and an inquisitive spirit by nature. He has been involved in banking for over 30 years. His quest for understanding complex economic phenomena is his muse for writing and he shares his insights on his blog.