The Income Tax Really Is Evil 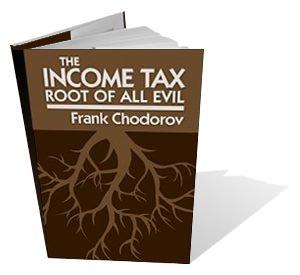 [Published as the foreword to Frank Chodorov's The Income Tax: Root of all Evil (1954)]

This was, to be sure, "the home of the free and the land of the brave." Americans were free simply because the government was too weak to intervene in the private affairs of the people — it did not have the money to do so — and they were brave because a free people is always venturesome. The obligation of freedom is a willingness to stand on your own feet.

The early American wanted it that way. He was wary of government, especially one that was out of his reach. He had just rid himself of a faraway and self-sufficient political establishment and he was not going to tolerate anything like it in his newly founded country. He recognized the need of some sort of government, to keep order, to protect him in the exercise of his rights, and to look after his interests in foreign lands. But he wanted it understood that the powers of that government would be clearly defined and be limited; it could not go beyond specified limits. It was in recognition of this fear of centralized power that the Founding Fathers put into the Constitution — it never would have been ratified without them — very specific restraints on the federal government.

In other matters, the early American was willing to put his faith in home government, in a government of neighbors, in a government that one could keep one's eyes on and, if necessary, lay one's hands on. For that reason, the United States was founded as a Union of separate and autonomous commonwealths. The states could go in for any political experiments the folks might want to try out — even socialism, for that matter — but the federal government had no such leeway. After all, there were other states nearby, and if a citizen did not like the way one state government was managing its affairs, he could move across the border; that threat of competition would keep each state from going too far in making changes or in intervening in the lives of the citizens.

The Constitution, then, kept the federal government off balance and weak. And a weak government is the corollary of a strong people.

The Sixteenth Amendment changed all that. In the first place, by enabling the federal government to put its hands into the pockets and pay envelopes of the people, it drew their allegiance away from their local governments. It made them citizens of the United States rather than of their respective states. Theft loyalty followed theft money, which was now taken from them not by their local representatives, over whom they had some control, but by the representatives of the other forty-seven states. They became subject to the will of the central government, and their state of subjection was emphasized by every increase in the income tax levies.

The state governments likewise lost more and more of their autonomy. Not only was their source of revenue being dried up by federal preemption, so that they had less and less for the social services a government should provide, but they were compelled in their extremity to apply to the central authorities for help. In so doing they necessarily gave up some of their independence. They found it difficult to stand up to the institution from which they had to beg grants-in-aid. Furthermore, the federal government was in position to demand subservience from the state governments as a condition for subventions. It has now become politically wise for governors, legislators, and congressmen to "play ball" with the central government; they have been reduced to being procurement officers for the citizens who elect them. The economic power which the federal government secured by the Sixteenth Amendment enabled it to bribe the state governments, as well as the citizens, into submission to its will.

In that way, the whole spirit of the Union and of its Constitution has been liquidated. Income taxation has made of the United States as completely centralized a nation as any that went before it; the very kind of establishment the Founding Fathers abhorred was set up by this simple change in the tax laws. This is no longer the "home of the free," and what bravery remains is traceable to a tradition that is fast losing ground.

For those of us who still believe that freedom is best, the way is clear: we must concentrate on the correction of the mistake of 1913. The Sixteenth Amendment must be repealed. Nothing less will do. For it is only because it has this enormous revenue that the federal government is able to institute procedures that violate the individual's right to himself and his property; enforcement agencies must be paid. With the repeal of the amendment, the socialistic measures visited upon us these past thirty years will vanish.

The purchase of elections with federal money will no longer be possible. And the power and dignity of the home governments will be restored.

This measure should be supported by the governors and legislators of all the states. Every state in the Union now contributes in income taxes to the federal government more than it gets back in grants-in-aid; this is inevitable, because the cost of maintaining the huge federal machinery must come out of the taxes before the citizen can get anything. With the abolition of income taxation the states will be better able to serve its citizens, and because the state governments are closer and more responsive to the will of the people, there is greater chance that the citizens will get their full dollar's worth in services.

However, the principal argument for the repeal of the Sixteenth Amendment is that only in that way can freedom from an interventionist government be restored to the American people.

Bracken Lee (1899–1996) was governor of Utah (1949–1957) and a leading opponent of the income tax. Murray Rothbard praised him in The Betrayal of the American Right, calling him "the closest thing to a libertarian in political life."