The Inclination to Love Liberty 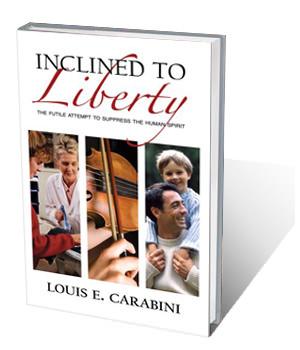 While I have been associated with the Ludwig von Mises Institute for some time, distance and my work schedule have meant that my face-to-face interactions with others who share my appreciation for the Institute's work have been too infrequent. So it was a great pleasure to be able to attend the Mises Circle event — Economic Downturn: Cause and Cure— held in Newport Beach (only two hours from where I live and, as a bonus for me, at the Balboa Bay Club, where my wife and I honeymooned) on November 14.

I got a chance to reconnect with former students and colleagues, and meet several people for the first time (even a few fans). I particularly enjoyed meeting Louis Carabini, the event's sponsor. So after I got home, I read his book Inclined to Liberty, which he generously provided to all the participants. Like virtually all of the works available from the Mises Institute, it offered useful insight and inspiration. So, both in thanks and in hopes of getting more people to read his short book, I would like to share a few of its gems.

The royal "we" [the State] seems to moralize and justify acts that the "I" would render reprehensible.

Blaming others for what we don't have directs our energy and ingenuity away from the only reliably effective source of achievement in the world — self-reliance.

In a self-reliant society, pet peeves may keep us awake at night, but in a democratic society, we can spend a lifetime of energy creating one pet peeve after another and offering "our" solution.

No one owes us gasoline, medicine, food, jobs, or anything else, so why should we criticize the person for the price he charges us or the wage he offers for something that he was not obligated to provide for us in the first place?

In a small setting, we view the use of force as a means to help others to be the antithesis of charity. However, in a political arena, we find ourselves condoning, even promoting, the use of physical force as the proper means to extract aid. And when such force is used, we paradoxically refer to it as an act of charity and compassion.

In the real world, someone must work to provide and pay for all the free benefits that others receive — and that "someone" isn't the State.

A claimant of a right to a free ride, such as free health care, is a disclaimer of the natural inalienable rights of the person upon whom the claim is made.

The democratic State simply provides an attractive means for some to acquire the resources produced by others at little or no cost to themselves, while preventing any real recourse for those from whom those resources are taken.

Those who earn wealth by producing goods and services that others choose to purchase have freed multitudes from the miseries that nature would have otherwise bestowed.… Because the earning of wealth in free markets is dependent upon those who perceive value in the earner's goods and services, the greater the wealth earned by one necessitates the greater the perceived wealth (well-being) gained by another.

Earning wealth is neither a zero-sum nor a negative-sum game.

Those wishing to close the gap between the rich and the poor (by restricting individual liberty and transferring wealth) will … only reduce real earnings for everyone, and in the process, harm the poorest the most.

When free markets create wealth, regardless of how wealthy one individual becomes, someone else … is also better off.… Those of wealth have not taken anything from society, but, in fact, have given to society an amount of wealth that far exceeds the amount they have earned.

When considering the personal affairs of others, we should ask ourselves, "To whom do these affairs belong — them or me?"

Those seeking the greatest sustainable financial benefits for the least well-off group can only achieve their goal by allowing free markets to naturally bring all human beings to greater levels of well-being.

When the State acquires the assets of an estate, they are simply distributed to persons other than those chosen by the earner. When one argues that heirs don't deserve the assets because they didn't earn them, what can be said about those persons who receive those assets via the State?

Any political proposal that prevents peaceful activity, in effect, condones acts of violence … upon persons who are minding their own business or interacting with other persons on a volitional and contractual basis … because someone who is not a participant in those activities finds those activities and associations objectionable.

A proponent of any State policy concurrently must condone the acts necessary to enforce its compliance … regardless of the rhetoric, any act used to enforce compliance remains inconsistent with human liberty, since that compliance involves a master and a subject.

Self-reliance is a better tool than State-reliance, because it promotes prudence.… Individual liberty does not guarantee better judgment, but it does gravitate in that direction via natural feedback…. This natural feedback is the "invisible hand" from which complex, living structures and highly productive markets evolve.

Involuntary means to improve welfare will fail to meet the intended goal, regardless of how it is engineered.

Problems don't disappear in free markets, of course; they simply are resolved or diminished more efficaciously there than in a system that employs coercion. In free markets, problems invite entrepreneurs to solve them … in an unimaginable variety of ways.

I found myself in particular agreement with two of his powerful concluding thoughts:

Liberty is an end unto itself, with prosperity as its positive externality.

Liberty is won when you accept the idea that you are the sole master of your life.… There will always be those who will claim to be your master, but you will know otherwise.