Illegal Immigrants and the Housing Bubble 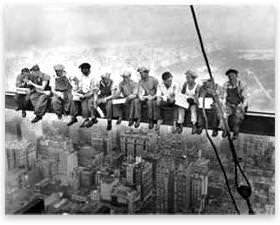 If you watch Lou Dobbs' show you would think that illegal immigration is the biggest problem facing America today — worse than government inflation and the Fed, standing armies, the military-industrial complex and Operation Iraqi Freedom, and government spying and suppression of our rights.

Immigration, illegal or otherwise, is not the problem per se. We are, after all, a nation of immigrants, and mostly of the poverty-stricken sort. It is a shame that the son of a failed Texas propane salesman, Dobbs himself is a former welfare worker and ambulance-chasing news reporter so you would think that Dobbs would have sympathy for these immigrants and look for the real cause of the problem elsewhere.

The only national problem with immigration lies with government. Because immigrants are relatively poor they tend to pay less in taxes than their use of so-called government services like health care and education, and thus increase taxes on citizens. We can therefore solve the immigration problem by simply eliminating government programs that provide free services. Note: we would simultaneously solve the problems of education and health care by placing these industries back into the private sector.

One question that doesn't get addressed by Dobbs or anyone else is the reason for the mad rush of illegal immigration — why have so many people entered the country illegally in recent years. One possibility is the legal system which has sought to protect the rights of people, particularly immigrants, and thus prevented government bureaucrats from controlling the flow of immigration.

This however is at best a partial explanation because it is difficult to imagine government bureaucrats accomplishing anything of note. Eleven or so federal bureaucracies and the mighty US military failed to protect us from the 9/11 attacks. The TSA army of airport security personnel has failed multiple tests to prevent weapons from being brought on airplanes. The FDA has allowed deadly drugs into the market, while preventing useful ones. Meanwhile under its so-called protection the number of food poisonings seems to be increasing alarmingly, while it wages war against the relatively benign and low-cost industries that provide vitamins, supplements, and alternative medical approaches to healthcare.

Why would we expect the border-control and immigration bureaucracies to be any different? This is especially the case when potential immigrants have such a powerful economic interest in moving to the United States. The rest of the world has made tremendous progress in recent years by adopting more liberal economic policies, but there is still a huge gap between the standard of living in America and that of places such as Mexico, South America, Africa, Eastern Europe, and Asia.

The question remains: why all the recent immigration? I believe that the answer lies to a large degree with the housing bubble in the United States. The normal number of housing starts is about one million per year, but housing starts have exceeded one million every year since the early 1990s. The housing bubble appeared in the wake of the bursting of the technology stock bubble and only began to unravel in 2006. Housing starts have already returned to normal levels, but are soon likely to go below normal levels.

What does this have to do with illegal immigration? Immigrants, particularly illegal Mexican immigrants, have largely found jobs in industries associated with the housing bubble. Immigrants work at jobs in the construction, landscaping, and road construction industries. Employment in the construction industry alone is currently nearly two million jobs above trend (7.7 versus 5.9 million). Of course many of the illegal immigrants are not even counted in such statistics, but just take a look at residential, landscaping, and road construction sites and you are likely to find many non — English-speaking immigrants.

Therefore immigrants have a powerful economic incentive to move to America — lavish government benefits plus good paying jobs that are the result of the housing bubble. The boom phase of the business cycle and bubbles naturally misallocate labor from one industry to another, and in the case of the housing bubble it has been to allocate labor to the construction, mortgage, and real estate industries with immigrants helping to fill the gaps in the construction industry.

Of course all of this will have to be undone because all bubbles eventually burst to one extent or another and all booms eventually are followed by "corrections" that drive whole economies, regions, and industries into economic slumps. A slump in construction will lead to unemployment and bankruptcies. In terms of immigrants we will likely see many return home, or turn up on government welfare rolls — another legacy of the Greenspan Fed.

You don't have to be a rocket scientist to solve these problems. We need to return to the sound monetary policy of the gold standard and an America where education and assistance to the needy are in the hands of the private sector, not government bureaucrats.