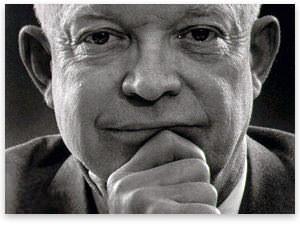 [This article originally appeared in The American Conservative (2011).]

Eisenhower's farewell speech was a long and nearly hysterical argument for the Cold War. He presented it as more than a military policy against Russia, but rather as a grand metaphysical struggle that should take over our minds and souls, as bizarre as that must sound to the current generation.

His words were Wilsonian, even messianic. The job of US military policy is to "foster progress in human achievement" and enhance "dignity and integrity" the world over. That's a rather expansive role for government by any standard. But he went further. An enemy stands in the way of achieving this dream, and this enemy is "global in scope, atheistic in character, ruthless in purpose, and insidious in method." This great struggle "commands our whole attention, absorbs our very beings."

Because some crusty apparatchiks are imposing every manner of economic control over Russia and a few satellites, US foreign policy must absorb the whole of our beings? So much for limited government.

The rhetoric had to be hysterical to overcome a few obvious problems. Russia is a faraway country and the notion of an invasion was about as likely as one from Mars. Russia, an authoritarian state operating under the ideological cover of Communism, had only a few years earlier been declared our valiant ally in the struggle against Japan and Germany.

But Americans woke up one day to find that the line had suddenly changed: now Russia was the enemy to be defeated. In fact, the Russian government — already in deep economic trouble as a socialist regime — was bankrupted by World War II and dealing with incredible internal problems. The Soviets couldn't begin to manage the world of Eastern Europe that had been given as a prize for being the ally of the United States during the war. It was for this reason that Nikita Khrushchev began the first great period of liberalization that would end in the eventual unraveling of this nonviable state. The United States not only failed to encourage this liberalization, but pretended it wasn't happening so as to build up a new form of socialism at home.

Indeed, the entire Cold War ideology was invented by Harry Truman and his advisers in 1948 as

It was an unprecedented form of peacetime socialism, designed to appeal to big business, and Eisenhower became its spokesman. Savvy libertarians knew exactly what was going on and supported Cold War opponent Robert Taft for the Republican nomination in 1952. But the nomination was effectively stolen by Eisenhower, with massive establishment backing. He repaid his backers with his support and expansion of Truman's program.

It's true that his farewell speech warned against "unwarranted influence, whether sought or unsought, by the military-industrial complex," and this is the part that people remember. But Eisenhower himself entrenched this very machinery in American life, virtually inventing the peacetime armaments industry and imposing military regimentation on the country. His approach was fundamentally un-American; or, another way to put it, he redefined what it meant to be an American. Instead of a free people, he forged a program for the permanent militarization of the country.

The evidence for this militarization begins with massive increases in military spending. As a percent of total budget outlays, military spending went from 30 percent in 1950 to 70 percent in 1957. This was the largest peacetime buildup in American history. During a dramatic economic expansion, the president worked to maintain a high military-spending level as a percentage of the rising GDP — establishing the modern precedent that military socialism is integral to the economic life of the country. Spending rose in absolute terms every year he was president, from $358 billion in 1952 to $585 billion in the last budget for which he bore responsibility in 1962, a whopping 63.4 percent increase during the Eisenhower years.

His buildup was not limited to the arms sector; it penetrated every aspect of civilian life. Our schools were made to feature scary and abusive drills to practice what children should do if the Russians should drop bombs on their heads. An entire generation was raised with irrational fears of mythical threats.

Then there was the catastrophic Interstate Highway System, which was not built to make your trip to the beach go faster. Its purpose was to permit the military to move troops quickly. There were also cockamamie schemes of driving nuclear bombs around on those highways to prevent the commies from keeping track of them.

Eisenhower was influenced in funding this amazing boondoggle by his experience in 1919 with the Transcontinental Convoy on the Lincoln Highway, which drove military trucks from one coast to the other. Another influence was Hitler's project of building cross-country roads, again to move troops. The Interstate Highway System led to huge population upheavals and continues to distort commercial demographics in every town in the United States.

Given all this, the notion that Eisenhower was worried about the military-industrial complex is preposterous. He was devoted to it.

This article originally appeared in The American Conservative (2011).